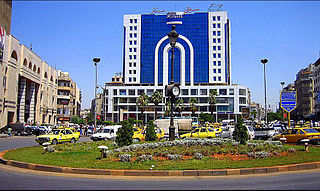 Homs, known in pre-Islamic Syria as Emesa, is a city in western Syria and the capital of the Homs Governorate. It is 501 metres (1,644 ft) above sea level and is located 162 kilometres (101 mi) north of Damascus. Located on the Orontes River, Homs is also the central link between the interior cities and the Mediterranean coast.

Landerd is a municipality within the province of North Brabant in the southern Netherlands.

ttyl is a young adult novel written by Lauren Myracle. It is the first book in the 'Internet Girls' series. In 2004, it gained attention for being the first novel written entirely in the style of instant messaging conversation. The novel was a New York Times, Publishers Weekly, and a Book Sense bestseller. "ttyl" is internet slang for "Talk to you later".

Talkalakh or Tel Kalah is a city in western Syria administratively belonging to the Homs Governorate as the capital of the Talkalakh District just north of the border with Lebanon and west of Homs. According to the Central Bureau of Statistics (CBS) Talkalakh had a population of 18,412 in 2004. Its inhabitants are predominantly Sunni Muslims, while the surrounding villages are mostly inhabited by Alawites. Most of the city's Turkmen residents have fled as a result of the ongoing Syrian civil war. 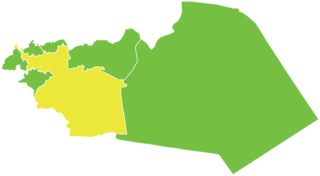 Homs District is a district of the Homs Governorate in central Syria. The administrative centre is the city of Homs.

Hom is a surname in various cultures. Its languages of origin include Danish, Dutch, English, and Taishanese.

The Free Syrian Army (FSA) is a loose faction in the Syrian Civil War founded on 29 July 2011 by officers of the Syrian Armed Forces whose stated goal was to bring down the government of Bashar al-Assad. A formal organization at its founding, its structure gradually dissipated by late 2012, and the FSA identity has since been used by various unconnected opposition groups.

The following is a timeline of the Syrian uprising from September to December 2011. This period saw the uprising take on many of the characteristics of a civil war, according to several outside observers, including the United Nations Commission on Human Rights, as armed elements became better organized and began carrying out successful attacks in retaliation for the ongoing crackdown by the Syrian government on demonstrators and defectors. 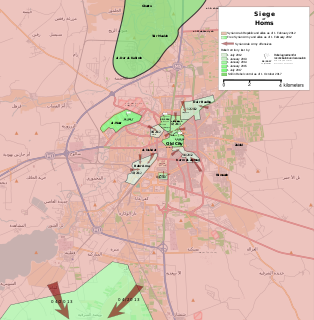 The 2012 Homs offensive was a Syrian Army offensive on the armed rebellion stronghold of Homs, within the scope of the Siege of Homs, beginning in early February 2012 and ending with the U.N. brokered cease fire on 14 April 2012.

Al-Ghassaniya is a town in central Syria, administratively part of the Homs Governorate, located south of Homs and just east of Lake Qattinah. Nearby localities include Kafr Mousa to the south, district capital al-Qusayr 13 kilometers to the southeast, al-Buwaida al-Sharqiya to the east and Qattinah to the northeast.

Tonnie Harry Cusell Lilipaly, is a Dutch-born Indonesian former footballer who previously plays for GVVV in Topklasse. He was also member of Indonesia national team.

The al-Qusayr offensive was an operation by the Syrian Government forces against Opposition forces at al-Qusayr in Homs province, during the Syrian Civil War. The operation was launched on 4 April 2013. The Syrian Army, the Lebanese militia Hezbollah and the National Defense Forces played key roles in the attack. Its aim was to capture all villages around the rebel-held town of al-Qusayr, thus tightening the siege of the city and ultimately launching an attack on al-Qusayr itself. The region was an important supply route for rebels fighting Syrian government forces in Homs.

Ali Mahmoud Othman is a Syrian citizen journalist and activist from Homs. He is nicknamed the "Eyes of Baba Amr" and "Jeddo" (Grandfather). 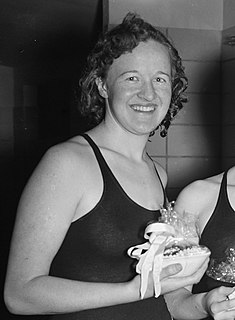 Dirkje "Dicky" van Ekris was a Dutch swimmer. She competed in the 100 m backstroke at the 1948 Olympics and finished in sixth place.

Jawbar is a village in central Syria, administratively part of the Homs Governorate, located south of Homs. According to the Syria Central Bureau of Statistics (CBS), Jawbar had a population of 4,242 in the 2004 census. Its inhabitants are predominantly Sunni Muslims. 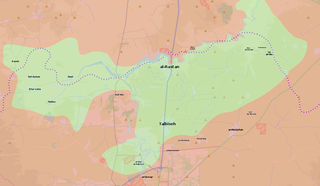