Tono (都乃, born October 31)[ citation needed ] is a Japanese actress and singer. She sings in "Pepessale". She is from Shizuoka. [1]

On September 24, 2008, Tono made her debut as a member of chorus unit "M". She sang melody and low parts. Her first single reached 14th on the Oricon chart. Her second single was 20th in Oricon chart, and her third single was 38th on Oricon.

She mastered six-stage calligraphy, [7] and was influenced by relatives who do Japanese flower arrangement and Japanese tea ceremony. [8]

Kotono Mitsuishi is a Japanese voice actress and narrator. She was affiliated with Arts Vision and Lasley Arrow. Mitsuishi lived in Nagareyama, Chiba. She graduated from high school and entered the Katsuta Voice Actor's Academy in 1986. She is well known for her roles Usagi Tsukino in Sailor Moon and Misato Katsuragi in Neon Genesis Evangelion & Sayaka Mine in Yaiba.

Pokémon the Movie: Black—Victini and Reshiram and Pokémon the Movie: White—Victini and Zekrom, originally released in Japan as Pocket Monsters Best Wishes! The Movie: Victini and the White Hero: Reshiram and Pocket Monsters Best Wishes! The Movie: Victini and the Black Hero: Zekrom, respectively, are Japanese anime films directed by Kunihiko Yuyama. Together, they make up the fourteenth Pokémon film. They were released on July 16, 2011 in Japan. The movies feature Victini the Victory Pokémon, the Vast White/White Yang Pokémon Reshiram and the Deep Black/Black Yin Pokémon Zekrom. Both films combine comedy, drama, action, and fantasy. The events of two different versions of the film take place during the 14th season of Pokémon: Black & White.

Yui Ogura is a Japanese voice actress and singer.

Sachika Misawa is a Japanese voice actress and singer from Yamanashi Prefecture who is affiliated with Space Craft Entertainment. As a singer, she is signed to Warner Bros. Home Entertainment Japan. Her main roles include Kuroyukihime in Accel World, Minami Azuma in Tokyo ESP, Cafe in Yumeiro Patissiere, Rin in the music video for Shelter, and Yukari Kohinata in Locodol.

Yukina Kashiwa is a Japanese actress and former idol singer. She was in the girl groups Momoiro Clover Z and Nogizaka46.

Sora Amamiya is a Japanese voice actress and singer from Tokyo, affiliated with Music Ray'n. After passing an audition held by Music Ray'n, she made her voice acting debut in 2012. She played her first main role as Kaori Fujimiya in the 2014 anime television series One Week Friends. She is a member of the music unit TrySail, along with voice actress Momo Asakura and Shiina Natsukawa.

Yurika Kubo is a Japanese voice actress, singer and model from Nara Prefecture who is associated with Stay Luck. She is best known for her role as Hanayo Koizumi in the idol group μ's, which is part of the Love Live! multimedia franchise.

Yuma Uchida is a Japanese voice actor and singer who works for I'm Enterprise. His big roles have included Yuuma Kousaka in Gundam Build Fighters Try, Nagisa Kiryū in Classroom Crisis, Eishirō Yabuki in The Asterisk War, Hayate Immelmann in Macross Delta, Ein Dalton in Mobile Suit Gundam: Iron-Blooded Orphans, Iori Kitahara in Grand Blue, and Ash Lynx in Banana Fish. In 2017, he received the 11th Seiyu Awards for Best Male Newcomer with Setsuo Itō and Yusuke Kobayashi. In 2019, he won Best Male Lead Actor in the 13th Seiyu Awards. He made his singing debut in May 2018 under the King Records label. His older sister is voice actress Maaya Uchida who also works in the same company.

Karin Takahashi is a Japanese singer and actress. She debuted as a member of the girl group Prizmmy, where she also made television appearances in the live-action segments of the anime series Pretty Rhythm. Following the group's disbandment in 2017, she appeared in 2.5D musicals and other musical theatre productions. She has had notable roles including Sailor Saturn in Sailor Moon: Amour Eternal and Un Nouveau Voyage and Sayu Yagami in Death Note: The Musical.

Keyakizaka46 is a Japanese idol girl group produced by Yasushi Akimoto. The group was created on August 21, 2015, becoming Nogizaka46's first sister group under the Sakamichi Series. Keyakizaka46 was named after Keyakizaka street within Roppongi Hills in Minato, Tokyo.

Eromanga Sensei (エロマンガ先生) is a Japanese light novel series written by Tsukasa Fushimi and illustrated by Hiro Kanzaki. ASCII Media Works has published nine volumes in the series under its Dengeki Bunko imprint since December 2013. A manga adaptation illustrated by Rin began serialization in Dengeki Daioh in May 2014. An anime adaptation produced by A-1 Pictures aired from April to June 2017.

Yūka Sugai is a Japanese idol who is the captain of idol group Keyakizaka46. She is represented by Sony Music Records.

Mizuho Habu is member of Japanese idol group Keyakizaka46. She is represented by Sony Music Records.

Yui Kobayashi is a Japanese model and member of idol group Keyakizaka46. She is represented by Sony Music Records and is an exclusive model with fashion magazine with.

Miona Hori is a Japanese idol singer, actress and fashion model. She is a second generation member of the Japanese girl group Nogizaka46, and a regular model for the fashion magazine ar. 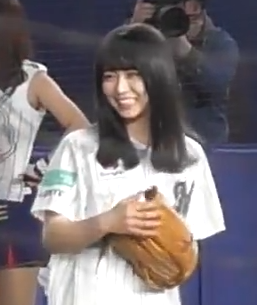 Neru Nagahama is a retired Japanese idol who was part of the idol group Keyakizaka46. She was represented by Sony Music Records.

Yui Imaizumi (今泉佑唯) is a Japanese actress, model, and tarento. She made her debut as a member of Keyakizaka46, a female idol group.