The East Japan Railway Company is a major passenger railway company in Japan and is the largest of the seven Japan Railways Group companies. The company name is officially abbreviated as JR-EAST or JR East in English, and as JR Higashi-Nihon in Japanese. The company's headquarters are in Yoyogi, Shibuya, Tokyo, next to Shinjuku Station. It is listed in the Tokyo Stock Exchange with secondary listings in the Nagoya and Osaka stock exchanges, is a constituent of the TOPIX Core30 index, and is also one of the two only Japan Railways Group constituents of the Nikkei 225 index, the other being JR Central.

Tokyo Station is a railway station in Chiyoda, Tokyo, Japan. The original station is located in Chiyoda's Marunouchi business district near the Imperial Palace grounds. The newer eastern extension is not far from the Ginza commercial district. Due to the large area covered by the station, it is divided into the Marunouchi (west) and Yaesu (east) sides in its directional signage. 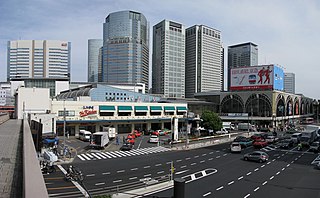 Ikebukuro Station is a major railway station located in the Ikebukuro district of Toshima, Tokyo, Japan, shared by East Japan Railway Company, Tokyo subway operator Tokyo Metro, and the two private railway operators Seibu Railway and Tobu Railway. With 2.71 million passengers on an average daily in 2007, it is the second-busiest railway station in the world, and the busiest station in the Tobu, Seibu, and Tokyo Metro networks. It primarily serves commuters from Saitama Prefecture and other residential areas northwest of the city centre. It is the Tokyo terminal of the Seibu Ikebukuro Line and the Tobu Tojo Line. 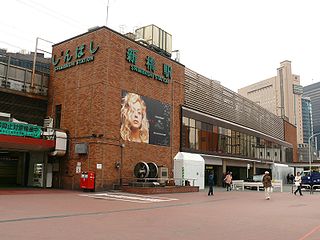 Odawara Station is a railway station in Odawara, Kanagawa, Japan. It is a gateway station to the Hakone area.

Hachiōji Station is a railway station in the city of Hachiōji, Tokyo, Japan, operated by East Japan Railway Company. It opened on August 11, 1889.

Ōmiya Station is a railway station in Ōmiya-ku, Saitama, Japan. It is a major interchange station for the East Japan Railway Company, and is also operated by the private railway operator Tobu Railway.

Kita-Senju Station is a railway station in Adachi, Tokyo, Japan. Kita-Senju is the third-busiest station on the Tokyo Metro network, after Ikebukuro and Otemachi. It is the tenth-busiest JR East station.