Bulgarian, is a South Slavic language spoken in Southeastern Europe, primarily in Bulgaria. It is the language of Bulgarians. 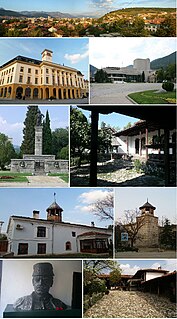 Sliven is the eighth-largest city in Bulgaria and the administrative and industrial centre of Sliven Province and municipality.

Boxing is a combat sport and blood sport in which two people, usually wearing protective gloves, throw punches at each other for a predetermined amount of time in a boxing ring.

In 1996 he won the silver medal at the European Amateur Boxing Championships in Vejle, Denmark. Tontchev turned professional in 1997.

The Men's 1996 European Amateur Boxing Championships were held in Vejle, Denmark from March 30 to April 7. The 31st edition of the bi-annual competition, in which 304 fighters from 35 countries participated this time, was organised by the European governing body for amateur boxing, EABA. 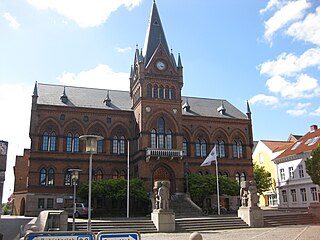 Vejle is a town in Denmark, in the southeast of the Jutland Peninsula at the head of Vejle Fjord, where the Vejle River and Grejs River and their valleys converge. It is the site of the councils of Vejle Municipality (kommune) and the Region of Southern Denmark. The city has a population of 54,862, making it the ninth largest city in Denmark. Vejle Municipality has a population of 111,743. The city is part of the Triangle Region, which includes the neighbouring cities of Kolding and Fredericia.

Moldova competed in the Summer Olympic Games as an independent nation for the first time at the 1996 Summer Olympics in Atlanta, United States. Previously, Moldovan athletes competed for the Unified Team at the 1992 Winter Olympics.

Boxing at the 1996 Summer Olympics took place in the Alexander Memorial Coliseum in Atlanta. The boxing schedule began on 20 July and ended on 4 August. Twelve boxing events were contested, with the participation of 355 athletes from 97 countries.

Hocine Soltani was an Algerian boxer, who won two Olympic medals. In 1992, the southpaw placed third in the featherweight division (54–57 kg), and at the 1996 Summer Olympics he won the gold medal in the lightweight division.

Serafim Simeonov Todorov is a Bulgarian former amateur boxer. He won three consecutive gold medals at both the World and European Championships, and silver at the 1996 Olympics. He is the last boxer to defeat Floyd Mayweather Jr., who later went on to become one of the all-time greats in professional boxing.

Ivailo Marinov is a Bulgarian boxer of Turkish ancestry, who won the bronze medal at the 1980 Summer Olympics in light flyweight, and the gold medal in the same category at the 1988 Summer Olympics

Yudel Johnson Cedeno is a Cuban welterweight professional boxer, who is best known for winning an Olympic Light-Welterweight silver 2004 as an amateur. Some sources write the family name Jhonson.

Petar Lesov is a former Bulgarian boxer, who won the Flyweight Gold medal at the 1980 Summer Olympics. He is a two-time European champion in the flyweight division. Lesov is currently a boxing coach.

The Strandzha Cup is an international amateur boxing tournament held annually in Bulgaria. It often determines who will qualify to compete at the upcoming summer Olympic games. The Strandja Cup is the oldest international amateur boxing competition in Europe. The first tournament was held in 1950 at the "Yunak" stadium in Sofia. The trophy is awarded to the best boxer of the tournament. The first cup was awarded to Hristo Popov, born 1931.

Michael Vincent "Mike" Strange is a retired boxer from Canada, competing in the light welterweight division. He represented his native country at three consecutive Summer Olympics, starting in 1992 in Barcelona, Spain.

Christian Giantomassi is a former professional boxer from Italy, who won a bronze medal in the lightweight division at the 1996 European Amateur Boxing Championships in Vejle, Denmark, alongside Vahdettin İşsever from Turkey. There he lost to Bulgaria's eventual silver medalist Tontcho Tontchev in the semifinals.

Julien Lorcy, was a professional boxer who held the WBA lightweight title twice.

Tervel Venkov Pulev is a Bulgarian professional boxer. He is currently holding the EBU European Union Cruiserweight Title, which he won in Oct 2018 by KO, defeating Leonardo Bruzzese in front of the excited Bulgarian fans in Arena Armeec, Sofia. Pulev’s debut in professional boxing was in 2016 and since then he has won all his 13 fights to date, 11 out of them by knockout.

Henry Kungsi is a Papua New Guinean Olympic boxer. He represented his country in the flyweight division at the 1992 Summer Olympics. He won his first bout against Hussain Arshad of Pakistan, and then lost his second bout to Tontcho Tontchev of Bulgaria.

The men's lightweight event was part of the boxing programme at the 1992 Summer Olympics. The weight class allowed boxers of up to 60 kilograms to compete. The competition was held from 30 July to 8 August 1992. 29 boxers from 29 nations competed.