Tony Alvarez (19 December 1956 – 21 July 1997) was a Spanish Australian actor and singer. Born in Velez-Malaga, he was best known for his television roles in Australia and the US.

He is probably best remembered for his ongoing role as Dr Tony Garcia in the long running Australian soap opera The Young Doctors . He appeared in the role from 1977 until 1979. His character was a love interest of characters Lisa Brooks (Paula Duncan) and Tania Livingston (Judy McBurney).

After leaving The Young Doctors Alvarez starred on the stage in Evita and toured the UK with Ronnie Corbett in Cabaret. Alvarez was also a singer, and in the early 1980s he released a cover of Talking In My Sleep.

He had a brief guest role in television serial Prisoner in 1983 playing a man, also named Tony, revealed to be a vicious rapist. He followed this with a six-month stint as a fiery Spanish servant in drama series Carson's Law in 1984.

After Carson's Law, Alvarez worked in the US on the series General Hospital and The Bold and the Beautiful .

During Alvarez' career, he worked alongside Antonio Banderas and subsequently discovered they were born in the same town. [1]

Alvarez was diagnosed with an AIDS related cancer and died in Sydney at age 40 not far from the Mitchell Street studios where he first shot to fame in The Young Doctors. [2] 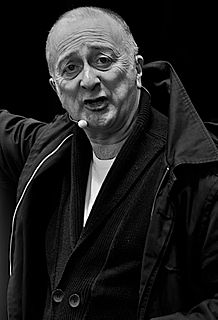 Sir Anthony Robinson is an English actor, comedian, author, television presenter and political activist. He played Baldrick in the BBC television series Blackadder and has hosted several historical documentaries including the Channel 4 programmes Time Team and The Worst Jobs in History. He has also written 16 children's books. Robinson was a member of the Labour Party for over 40 years and served on its National Executive Committee, being knighted for his public and political service in 2013, but left the party in 2019.

Paul John McGann is an English actor. He came to prominence for portraying Percy Toplis in the 1986 television serial The Monocled Mutineer. He later starred in the 1987 dark comedy Withnail and I, and as the eighth incarnation of the Doctor in the 1996 Doctor Who television film, a role he has since reprised in more than 70 audio dramas and the 2013 mini-episode "The Night of the Doctor". McGann is also known for playing Lieutenant William Bush in the Hornblower TV series. 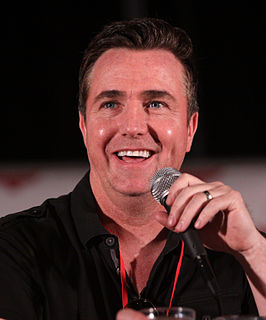 Paul McGillion is a Scottish actor, who has worked in television, film and theatre. He is best known for his role on the television series Stargate Atlantis as Dr. Carson Beckett.

Peter Bensley is an Australian actor.

Jacqueline Anne Woodburne is a Northern Irish-born actress, who is notable for her career on Australian television, and who is best known for her role of Susan Kennedy in Neighbours and her previous TV soap opera roles in The Young Doctors, Cop Shop, Sons and Daughters and Prisoner As of 2019, Along with Neighbours co-star Alan Fletcher she is the third longest-serving soap opera actor in Australia, after Home and Away stars Ray Meagher and Lynne McGranger.

Stefan Dennis is an Australian actor and singer best known for playing the role of cold-hearted and ruthless businessman Paul Robinson in the soap opera Neighbours from its first episode in March 1985 to the present day. He departed Neighbours in 1993, but returned in 2004 and has played Paul ever since. During his time away from Neighbours he was a cast member of Scottish soap opera River City. He is also known for his 1989 hit single "Don't It Make You Feel Good", which reached Number 16 in the Irish and UK Singles Chart.

Terence Donovan, also billed as Terence J. Donovan and Terry Donovan, is an English-Australian actor of stage and television, and the father of fellow actor and singer Jason Donovan. He is best known for his roles as Doug Willis in soap opera Neighbours and has appeared in TV drama series since its early days, including police drama series Division 4 and Cop Shop, as well as minor parts in numerous serials including The Prisoner, Sons and Daughters, A Country Practice, E Street and Al Simpson in Home and Away.

Jane Clifton is an Australian actress, singer, writer and voice artist. Clifton was born in Gibraltar to British Army parents. In 1961 she emigrated to Perth, Australia, before later settling in Melbourne. She became a naturalised citizen of Australia in 1992.

Sonja Tallis is an Australian actress, singer and drama teacher.

Christine Harris is an Australian actress and producer, born and raised in South Australia. She is currently director of HIT Productions theatre touring company.

Mary Ward Breheny, credited professionally as Mary Ward, is a former Australian actress of stage, television, and film, and a radio announcer. Ward trained in England and Australia, and worked in England on the stage circuit, before appearing in film. Returning to Australia, she became one of the first female radio announcers at the ABC in Australia. She is perhaps best known, both locally and internationally though as a character actress portraying elderly characters in television soap opera roles including: "Mum" (Jeanette) Brooks in the cult series Prisoner, and devious Dee Morrell in soap opera Sons and Daughters.

Peter John Adams was a New Zealand-born Australian actor, best remembered for his performances in Australian television. Born in Taumarunui, New Zealand, Adams later emigrated to Australia. He died of cancer in Melbourne in 1999 at the age of 61.

Louise Elizabeth Pajo is a New Zealand-born former television and film actress, she has worked in productions not only in her native country, but in British and Australia, starting from 1965 until 1999. Born in Hastings, New Zealand she trained in RADA in England. After graduating in 1966 she went on to appear in many popular programs there including The Avengers and is remembered by fans of Doctor Who for her role as Gia Kelly in the 1969 serial The Seeds of Death.

James Thomas Condon was an Australian actor of radio and stage, a scriptwriter and voice over, however best known for his numerous television roles in serials and television movies in Australia, pariculary Number 96 and Neighbours, he was the husband of Neighbours actress Anne Haddy.and the brother of theatre producer and actress Coralie Condon, who was known an Order of Australia recipient and was known as the "First Lady of Western Australian Television", she died on 31 December 2014, aged 99

Serge Lazareff is an Australian caucasian actor and scriptwriter, who was born in Shanghai, China.

Anthony Hawkins, was an English-born, Australian-based television actor. He was best known for his roles as Detective Senior Sergeant Greg Smith in the police procedural Special Squad (1984) and Frank diAngelo on The Saddle Club. He also had a recurring role in Prisoner as Bob Morris from 1980 to 1982. 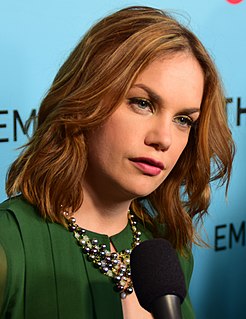