Last updated December 13, 2019
British rally driver
Not to be confused with Tony Amorose.

Ambrose was born in Chipping Norton, Oxfordshire, where his father owned a farm machinery business, and attended the local grammar school. [1] [2] This business entitled his father to a supplementary allowance for fuel, which was rationed during the Second World War. Ambrose learnt to drive by accompanying his father on his visits to farms, initially sitting on his father's lap to steer whilst his father operated the pedals, and learning map-reading skills (signposts having been removed from roads for fear of invasion). [2]

His father promised to buy him a car if he obtained a scholarship to Oxford University. [2] Ambrose won a scholarship in 1951 to read Engineering at Jesus College, Oxford, and he was given a red MG TC car by his father as promised. [1] [2] However, he was not permitted by university rules to keep a car in Oxford whilst he was in his first academic year. [2] Nevertheless, he made friends with other university motor sports enthusiasts and competed in events and rallies outside the university, sometimes in partnership with his elder brother Norman (who had read Physics at Jesus College from 1943 to 1945). In 1952, the brothers were part of the Oxford team for the Annual Varsity Rally, but lost to a Cambridge University team that included Archie Scott Brown. [2]

In the Trinity term of 1952, Ambrose and another Oxford driver, David Hamilton, approached the Proctors for permission to reactivate the University's Motor Drivers' Club, which had been banned before Ambrose started at Oxford for organising a race on public roads between Oxford and Marble Arch in London. [2] He obtained support from Earl Howe and Sir Miles Thomas, both former members of the club. The Proctors gave their permission for the club to be refounded, and it went on to be a source of strength for British rally driving in the 1960s. [1] Ambrose became Secretary, and later President; [1] Earl Howe and Sir Miles Thomas became honorary Vice Presidents. [2]

After leaving Oxford, Ambrose joined the Royal Air Force but continued to compete in rallies. In 1956, he won the RAC Rally with Lyndon Sims in an Aston Martin DB2. [2] He joined the BMC rally team in 1959, co-driving for Alec Pitts, Peter Riley and David Seigle-Morris before BMC Competitions Manager Stuart Turner paired him with Rauno Aaltonen. While paired with Peter Riley they devised descriptive route notes "pacenotes" to improve both speed and safety in rallying. A concept developed further with Aaltonen. Despite many podium finishes on European rallies, a long held ambition to win a Liege in an Austin-Healey 3000 proved elusive until 1964, when he co-drove with Rauno Aaltonen to win the last Spa-Sofia-Liege, an event lasting four days and nights with no scheduled sleep time. Aaltonen later recalled how Ambrose had driven 77 miles (124 km) at night in just 52 minutes, reaching speeds of 150 miles (241 km) per hour over cobblestone roads whilst Aaltonen slept in the car. The following year they won the 1965 European Rally Championship title, including victory at the RAC Rally in a Mini Cooper 1275S. [1] the first and only time that a Mini has won that event. [2] [3]

Ambrose left the BMC team in 1966 to spend more time with his family and his business. His last rally with BMC was the 1966 RAC Rally, with Simo Lampinen, although an accident meant that they had to stop. Ambrose then became a key part of the organising team for the 1968 London-Sydney Marathon and the 1970 London-Mexico Rally conducting reconnaissance and planning of both routes as well as on event management. His last two rallies were both with Rauno Aaltonen - 1969 Tour de Corse in a BMW 2002 tii finishing 7th overall / Gp2 class win and finally the 1969 RAC Rally GB Datsun 1600SSS Coupe finishing 8th overall. Businesses that he was involved with included a family-run decorating firm and a pub in Wales. Ambrose died in Newbury, Berkshire on 5 January 2008. [1]

Tony’s autobiography was published in 2019, having been edited by his nephew Philip Ambrose

Rally is a form of motorsport that takes place on public or private roads with modified production or specially built road-legal cars. It is distinguished by running not on a circuit, but instead in a point-to-point format in which participants and their co-drivers drive between set control points, leaving at regular intervals from one or more start points. Rallies may be won by pure speed within the stages or alternatively by driving to a predetermined ideal journey time within the stages.

Erik Hilding Carlsson was a Swedish rally driver for Saab. He was nicknamed "Carlsson på taket" as well as Mr. Saab. 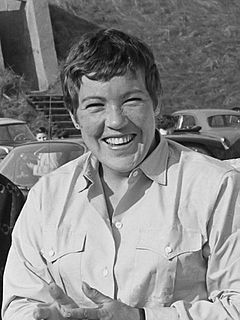 Patricia Ann "Pat" Moss-Carlsson was one of the most successful female auto rally drivers of all time, achieving three outright wins and seven podium finishes in international rallies. She was crowned European Ladies' Rally Champion five times. Her older brother Stirling Moss was a Formula One Grand Prix star during the 1950s. From 1963 until her death in 2008, Swedish rally driver Erik Carlsson was both her driving-partner and her husband.

Timo Mäkinen was one of the original "Flying Finns" of motor rallying. He is most famous for his hat-tricks of wins in the RAC Rally and the 1000 Lakes Rally.

Pauli Toivonen was a Finnish rally car driver. He drove for Citroën, Lancia and Porsche and had many successes to his credit. Toivonen had two sons, Harri and Henri, both also racing drivers. 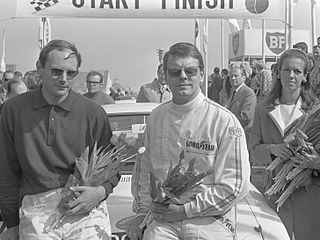 Roger Albert Clark, MBE was a British rally driver during the 1960s and '70s, and the first competitor from his country to win a World Rally Championship (WRC) event when he triumphed at the 1976 RAC Rally.

The 1970 London-Mexico World Cup Rally was the first of two World Cup Rallies to be held and the second of four marathon rallies to be held in a nine-year period beginning with the 1968 London-Sydney Marathon. The motor rally started at Wembley Stadium in London on 19 April 1970 and finished in Mexico City on 27 May 1970, covering approximately 16,000 miles (25,700 km) through Europe and South America. It was won by Hannu Mikkola and Gunnar Palm, driving a Ford Escort. 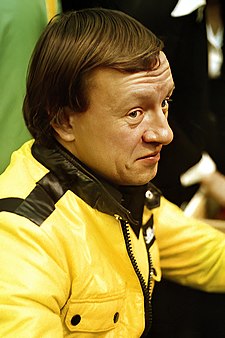 Rauno August Aaltonen, also known as "The Rally Professor", is a Finnish former professional rally driver who competed in the World Rally Championship throughout the 1970s.

Malcolm Irving Wilson, OBE is a British former rally driver and current owner of team and constructor M-Sport. He is the father of former World Rally Championship driver Matthew Wilson. He has also been married to Elaine Wilson since 1982.

The Southern Cross Rally was a major international rally mainly held in the Port Macquarie region of New South Wales, Australia, between 1966 and 1980. The rally attracted many of the world's leading rally drivers and factory teams.

Richard Anthony Fall was a British rally driver. He was born in Bradford. He began his rallying career as a club rally driver in a Mini. He was considerably better than his peers, however, and was soon spotted by the BMC team; this led to a drive in their works team alongside Paddy Hopkirk, Timo Mäkinen and Rauno Aaltonen. His first major international victory in the Mini was the 1966 Circuit of Ireland, where his co-driver was Henry Liddon.

Unsinkable Seven was a nickname given to the seven drivers and co-drivers who managed to survive to finish the notoriously difficult East African Safari Rally that began and ended in Kenya, in the unusually difficult rallies of 1963 and 1968.

John Sprinzel is a German born British former auto racing driver. He was renowned for competing in saloon and sports car racing and rallying.

The Alpine Rally, also known by its official name Coupe des Alpes, was a rally competition based in Marseille and held from 1932 to 1971. In the 1950s and the 1960s, it was among the most prestigious rallies in the world and featured an international route, consisting of famous mountain passes in Europe.

Alastair Caldwell was the McLaren Formula One motor-racing team manager from 1974 to 1978.

Gunnar Palm is a former Swedish rally co-driver. He is the brother of racer Torsten Palm. He lives with Gunilla Nilars.

Liège–Rome–Liège was a rally road race over some of Europe's toughest mountain roads held from 1931 to 1960. It was reserved for so-called tourism cars.