Tony Andruzzi (born May 22, 1925 in Cheyenne, Wyoming – died December 22, 1991 in Chicago, Illinois) was the name adopted by professional magician Tom S. Palmer from the age of 45 to the end of his life.

Born to Fay and Tom McGuire, the child was first christened as Timothy McGuire on July 22, 1925. But after Tom McGuire left Fay to raise the boy alone, Fay allowed Charles and Gertie Palmer to adopt the boy. He was rechristened Tom Stewart Palmer on March 29, 1926. His biological mother maintained a friendly relationship with the Palmer family, though did not divulge the nature of her relationship to Tom until his teens.

As a performer through the late 1960s, he retained the name of Tom Palmer while specializing in comedy magic. When he moved to Chicago, Illinois and changed styles to pursue bizarre magic, he adopted the name Tony Andruzzi, both in performance and in daily life. During his involvement with the Society for Creative Anachronism in the late 1960s through the mid-1970s, he also created the persona of Masklyn ye Mage, a character he would occasionally adopt in and out of period costume through the end of his life. Additionally, as a writer of magical effects, he used a variety of pen names, most notably Daemon Ecks.

As an outgrowth of his editorship of New Invocation, a periodical for performers of bizarre magic, Andruzzi organized and presented conventions for magicians supportive of this genre. Called Invocationals, they were held annually in Chicago from 1984 to 1990. Each Invocational revolved around performances, educational seminars, and socializing, while also paying tribute to a specific member of the bizarre-magic community. Honorees included:

Evocation is the act of calling upon or summoning a spirit, demon, deity or other supernatural agents, in the Western mystery tradition. Comparable practices exist in many religions and magical traditions and may employ the use of mind-altering substances with and without uttered word formulas. 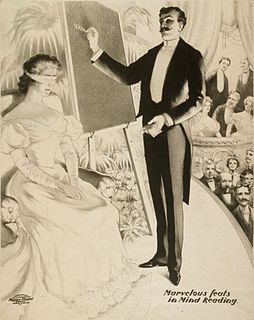 Mentalism is a performing art in which its practitioners, known as mentalists, appear to demonstrate highly developed mental or intuitive abilities. Performances may appear to include hypnosis, telepathy, clairvoyance, divination, precognition, psychokinesis, mediumship, mind control, memory feats, deduction, and rapid mathematics. Mentalists perform a theatrical act that includes effects that may appear to employ psychic or supernatural forces but that are actually achieved by "ordinary conjuring means," natural human abilities, and an in-depth understanding of key principles from human psychology or other behavioral sciences. 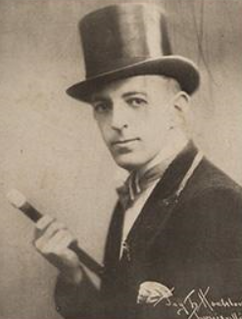 Richard Valentine Pitchford was a master magician under the name Cardini, whose career spanned almost half a century. Born in Britain, he worked chiefly in the United States of America.

Charles Wesley Cameron was a professional magician who specialised in a style known as bizarre magic. He was born in Edinburgh, Scotland, and has a younger brother.

Bizarre magic is a branch of stage magic. The major difference is that bizarre magic uses storytelling and word play to a much greater degree, and less emphasis is placed on the manual dexterity of the performer or the complexity of his equipment. The experience is intended to be more akin to small, intimate theater than a conventional magic show.

Neil Tobin is a magical and psychic entertainer, theatre producer and playwright, and a writer on related subjects. Since his performance material often involves themes of mortality and spirit contact—in addition to demonstrations of telepathy, precognition, magic, and even divination—he often performs as "Neil Tobin, Necromancer." 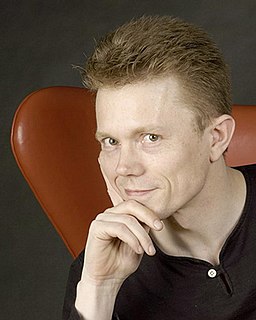 Tom Stone is the stage name of Thomas Bengtsson, a Swedish magician, editor and author. 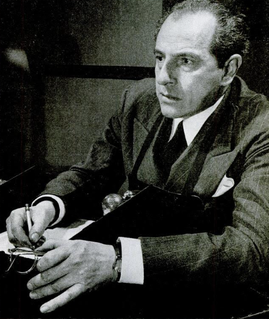 Daniel Sylvester Battagline, also known as Sylvester The Jester, is an American magician, best known for playing a cartoon character who comes to life. He has had hundreds of stage and television appearances, including NBC’s "World's Wildest Magic," ABC’s "Champions of Magic III", Jerry Lewis's Muscular Dystrophy Telethon and The Discovery Channel’s "More Science of Magic." He has performed in multiple Las Vegas shows including opening for The Amazing Johnathan, and appearing at Caesar’s Magical Empire. He also produces a series of magic products, and has been credited with creating the illustrations for various magic publications, such as the cover for The Amazing Johnathan's Every Trick in the Book, and the poster for John Carney's "Mr. Mysto" act. In 1996, he also created a prop for the television show, "Sabrina, the Teenage Witch." He has been featured on the cover of several magic and culture-related magazines, such as the September 1998 issue of Magic. 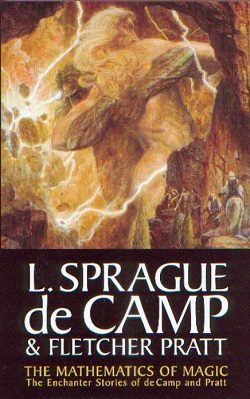 Joe Berg (1903–1984) was a professional magician and magic dealer who lived and worked in Chicago, Illinois and Hollywood, California. 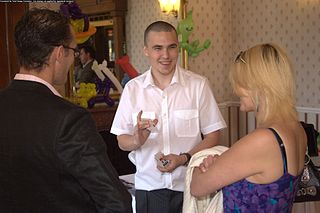 Close-up magic is magic performed in an intimate setting usually no more than 3 meters from one's audience and is usually performed while sitting at a table.

Jack Gwynne was an American illusionist, actor and creator of magic effects. 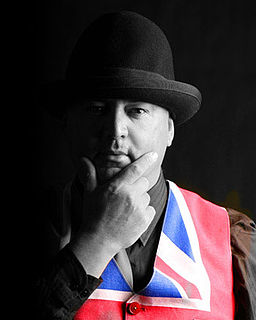 Gary 'Gazzo' Osbourne is a British street magician. An expert in cons and scams, he moved in the 1980s to the US, where he befriended Walter Irving Scott. He is Scott's only pupil and the only person with whom Scott entrusted his biography and life's work at card cheating and sleights.

Richard J. Kaufman is an author, publisher, illustrator, and editor of books and magazines in the field of magic. 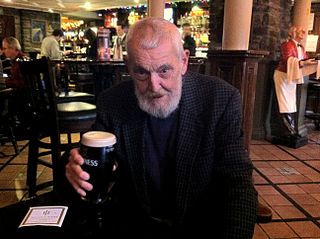 Anthony "Doc" Shiels is a Salford-born artist, magician and writer. After attending the Heatherley School of Fine Art in London, he moved to St Ives, Cornwall where in 1961, following the resignation of Barbara Hepworth, he was made a member of the committee of the influential Penwith Society of Arts. In St Ives he ran the progressive 'Steps Gallery', where he showed artists like Brian Wall and Bob Law. He had several solo exhibitions in London before then leaving St Ives following a drunken incident, in which he threatened police with a gun that he had obtained from painter-friend Terry Frost.

David Williamson is a professional sleight-of-hand artist, magician, and author. David Britland of Genii magazine called him "an exceptional stage performer" and "a magician who changed the way we do magic." He was named Magician of the Year in 2017 by the Academy of the Magical Arts, and was named an Honorary Member of prestigious British association The Magic Circle.