Tony Baker may refer to:

Vernon Anthony "Touchdown Tony" Baker was an American football running back in the National Football League. He played from 1968 to 1975, and played for the New Orleans Saints, the Philadelphia Eagles, the Los Angeles Rams, and finally, the San Diego Chargers, ending his career with one Pro Bowl appearance in 1969.

Tony Ferrino Baker is a former professional American football running back. He was drafted by the Atlanta Falcons in the tenth round of the 1986 NFL Draft. He played college football at East Carolina.

Anthony Drew "Tony" Dorsett is a former American football running back who played professionally in the National Football League (NFL) for the Dallas Cowboys and Denver Broncos. 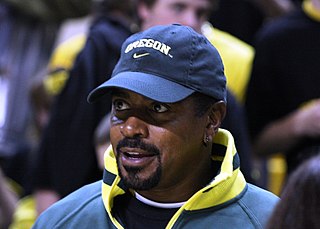 Ahmad Rashād is an American sportscaster and former professional football player. He was the fourth overall selection of the 1972 NFL Draft, taken by the St. Louis Cardinals.

Tony Lydell "Alligator" Bennett is a former professional American football linebacker. He was a first-round draft choice of the Green Bay Packers out of the University of Mississippi in the 1990 NFL Draft. He finished his pro career with the Indianapolis Colts. When he retired, he was fourth on the Packers' all-time sacks list. Bennett is the uncle of former running back Michael Bennett.

Dave Baker was a defensive back in the NFL, playing for the San Francisco 49ers for three years.

Raymond Barry Martin is an English former professional footballer born in Wolverhampton, Staffordshire, who played as a full back. He spent most of his professional career in England with Birmingham City, where he played 333 games in the Football League, became the club captain, and won the Player of the Year award two years running, in 1969–70 and 1970–71. His only goal for the club came against Hull City, in a 4–2 defeat at St Andrew's. He was a master of the slide tackle. The club awarded him a testimonial match against Wolverhampton Wanderers in 1971.

Anthony Thompson may refer to:

Ryan Edward Baker is a former American football defensive end who played for the Miami Dolphins of the National Football League. He was originally signed by the Dolphins as an undrafted free agent in 2009. He played college football at Purdue.

Harry Lee Jones was an American football running back who played in the National Football League. He was a first-round selection by the Philadelphia Eagles in the 1967 NFL Draft, and played from 1967 to 1970 for the Eagles. He played college football at Arkansas.

Anthony Allen may refer to:

Tony Davis may refer to:

Edwin Baker is an American football running back who is currently a free agent. He was drafted by the San Diego Chargers in the seventh round of the 2012 NFL Draft. He played college football at Michigan State.

Tony Carter is the name of:

Anthony Carter is a basketball player.

Edwin Baker may refer to:

Tony Brooks may refer to: