Anthony Joseph Bartirome (May 9, 1932 – June 22, 2018) was an American baseball player, coach and athletic trainer. He played first base for the Pittsburgh Pirates during the 1952 baseball season, after just one minor league season. He never appeared in another major league game following 1952, even though his professional career lasted through 1963. Prior to playing professionally, Bartirome was the star first baseman for a sandlot baseball team in Oakmont, Pennsylvania. He also went on to serve as a coach for the Atlanta Braves from 1986–88. He was the team trainer for the Pittsburgh Pirates from 1967–85. 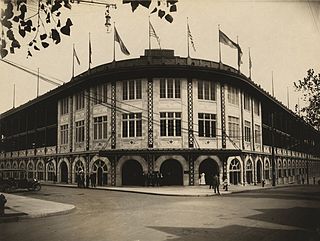 Forbes Field was a baseball park in the Oakland neighborhood of Pittsburgh, Pennsylvania, from 1909 to June 28, 1970. It was the third home of the Pittsburgh Pirates Major League Baseball (MLB) team, and the first home of the Pittsburgh Steelers, the city's National Football League (NFL) franchise. The stadium also served as the home football field for the University of Pittsburgh "Pitt" Panthers from 1909 to 1924. The stadium was named after its adjacent street, Forbes Ave., itself named for British general John Forbes, who fought in the French and Indian War and named the city in 1758.

Elroy Leon Face is an American former professional baseball relief pitcher. During a 17-year Major League Baseball (MLB) career, he pitched primarily for the Pittsburgh Pirates. A pioneer of modern relief pitching, he was the archetype of what came to be known as the closer, and the National League's greatest reliever until the late 1960s, setting numerous league records during his career.

Clyde Leroy Sukeforth, nicknamed "Sukey", was an American professional baseball catcher, coach, scout and manager. He was best known for signing the first black player in the modern era of Major League Baseball (MLB), Jackie Robinson, after Robinson was scouted by Tom Greenwade in the Negro leagues.

William Charles Virdon is an American former professional baseball outfielder, manager, and coach in Major League Baseball (MLB). Virdon played in MLB for the St. Louis Cardinals and Pittsburgh Pirates from 1955 through 1965 and in 1968. He served as a coach for the Pirates and Houston Astros, and managed the Pirates, Astros, New York Yankees, and Montreal Expos. 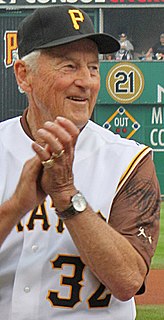 Vernon Sanders "Vern" Law is an American former baseball pitcher who played sixteen seasons in Major League Baseball (MLB) for the Pittsburgh Pirates. He played in 1950–51 and 1954–67. He batted and threw right-handed and was listed at 6 feet 2 inches (1.88 m) and 195 pounds (88 kg). Law signed for the Pirates as an amateur free agent in 1948 and played for three of their minor league affiliates until 1950, when he was promoted to the major leagues.

Diomedes Antonio Olivo Maldonado, nicknamed "Guayubin" for his hometown, was a Dominican professional baseball player and scout. The left-handed pitcher appeared in 85 Major League Baseball pitched over all or part of three seasons between 1960 and 1963 for the Pittsburgh Pirates and St. Louis Cardinals. He was the brother of fellow major leaguer Chi-Chi Olivo, and the father of major league pitcher Gilberto Rondón.

Gail Curtice Henley is a retired American professional baseball player, scout and manager. Although his playing career lasted for 14 seasons (1948–61), he appeared in only 14 games in Major League Baseball as a right fielder and pinch hitter, all during the opening weeks of 1954, for the Pittsburgh Pirates. He batted left-handed, threw right-handed, and stood 5 feet 9 inches (1.75 m) tall and weighed 180 pounds (82 kg).

The 1952 Pittsburgh Pirates season was the team's 71st season in Major League Baseball, and their 66th season in the National League. The Pirates posted a record of 42 wins and 112 losses, their worst record since 1890, and one of the worst in major league history.

The 1938 Philadelphia Phillies season was a season in American baseball. The team finished in eighth place – last in an eight-team National League – with a record of 45–105, 43 games behind the first-place Chicago Cubs and 24.5 games behind the seventh-place Brooklyn Dodgers. It was the first of five straight seasons in which the Phillies finished in last place. The Phillies wore blue and yellow on their uniforms in honor of the Tercentenary of New Sweden.

The 1939 Philadelphia Phillies season was a season in Major League Baseball. The Phillies finished eighth in the National League with a record of 45 wins and 106 losses.

The 1954 Philadelphia Phillies season was a season in Major League Baseball. The Phillies finished fourth in the National League with a record of 75 wins and 79 losses.

The 1955 Philadelphia Phillies season was a season in American baseball. It was the first season for Phillies' manager Mayo Smith. Prior to the season, the Phillies were seen to have strong pitching with ace Robin Roberts but did not have power hitters to match pennant favorites Brooklyn, New York, or Milwaukee, behind whom the Phillies finished in fourth place with a record of 77 and 77.

The 1959 Philadelphia Phillies season was the 77th season in the history of the franchise. During spring training, manager Eddie Sawyer told the press, "We're definitely not a last place club... I think the biggest thing we've accomplished is getting rid of the losing complex. That alone makes us not a last place club." The Phillies finished in last place in 1959, seven games behind seventh-place St. Louis and 23 games behind the pennant and World Series winning Dodgers. They attracted 802,515 fans to Connie Mack Stadium, seventh in the eight-team league.

Charles V. "Charley" Feeney was an American sportswriter in New York, New York, and Pittsburgh, Pennsylvania, for more than 40 years.