Anthony George Booth (9 October 1931 – 25 September 2017) was an English actor, best known for his role as Mike Rawlins in the BBC series Till Death Us Do Part . He was the father-in-law of former Prime Minister Tony Blair and the widower of Coronation Street star Pat Phoenix, marrying her a few days before her death in 1986.

Booth was born into a working-class family in Jubilee Road, Liverpool, in 1931 and raised Catholic. [1] His mother was a Roman Catholic of Irish descent, and his father was a merchant seaman during World War II and Catholic convert. Tony Booth attended St Edmund's Infants School and spent a year in hospital as a child with diphtheria. He then passed the Eleven-plus examination and attended St Mary's College, Crosby, where he was awarded a bursary to cover the cost of his books. [2]

His hopes of going to university were dashed when he had to leave school and get a job after his father was badly injured in an industrial accident. He then worked as a clerk in a docklands warehouse and at the United States Consulate in Liverpool, before being called up for national service with the Royal Corps of Signals. [3]

Booth developed a taste for acting when posted in the Army to SHAPE in Paris. [4] He spent five years in repertory theatre, before appearing in films and television during the 1960s. [4] He played roles in over twenty films, including The L-Shaped Room (1962), Corruption (1968), Brannigan (1975), Priest (1994) and Owd Bob (1997). [2] He appeared early in the run of the television series Coronation Street in 1960 and in an episode of The Avengers , but it was his role as the left-wing son-in-law in Till Death Us Do Part (1965) that brought him recognition. [1]

From 1985 to 1986, Booth appeared as pub landlord Ted Pilkington in the short-lived ITV soap Albion Market . [6] He starred in the 1998 short film The Duke , playing an elderly man who tells his adoring grandson that he is John Wayne. [2] In 2001, Booth appeared in several episodes of Family Affairs playing Barry Hurst, Sadie Hargreaves' brother-in-law. [5]

Booth played a tramp named Nobby Stuart in a special two-hander episode of EastEnders . [7] In 2007, he also played a tramp called Errol Michaels in Emmerdale . [5] Both of these characters played the purpose of a spiritual guide to a down-and-out character, in EastEnders, Alfie Moon (Shane Richie) and in Emmerdale, Bob Hope (Tony Audenshaw). [8]

Booth was married four times and had eight daughters by five women. By his first wife Gale Howard, he had two daughters, Cherie and Lyndsey. [6] Cherie, a Queen's Counsel, is married to the former Prime Minister Tony Blair. While Booth was a long-standing supporter of the Labour Party, his politics differed from that of his daughter and her husband. [7]

Booth nearly burned to death in November 1979 when, during a drunken attempt to get into his locked flat, he fell into a drum of paraffin. [7] He spent six months in hospital and needed 26 skin graft operations. [7] Shortly after his discharge from hospital, he went to visit an 'old flame', Coronation Street actress Pat Phoenix. She took him in and nursed him back to full health, and they lived together for six years. Phoenix's own health subsequently declined, and the pair married a few days before her death from lung cancer in 1986. [7]

With his third wife, Nancy Jaeger, he had a daughter, Joanna. [5]

Booth had five other daughters with partners he did not marry. He left Gale, his first wife, in 1961 for Julia Allan, with whom he had two daughters Jenia and Bronwen. [7] He had a daughter, Lucy Thomas in 1967 with Ann Gannon, who worked in radio sales, after a brief relationship; this did not become known publicly until 2002. [9] His relationship with Pamela Smith, which began in the 1960s, lasted 13 years; the couple had Booth's other two daughters, Emma and Lauren Booth, a broadcaster and journalist. [7]

In a rebuke to the British government's treatment of pensioners, Booth retired to Blacklion, County Cavan, in Ireland in 2003, but returned and lived in Broadbottom, 10 miles (16 km) east of Manchester. [10] In 2006 he said he was the victim of anti-English bias while living in Ireland. [8]

In March 2019, Booth's widow Steph published the book Married to Alzheimer's: A Life Less Ordinary with Tony Booth, a memoir about her time caring for her husband. [14]

Cherie Blair also known professionally as Cherie Booth, is a British barrister, lecturer, and writer. She is married to Tony Blair, who was the Prime Minister of the United Kingdom from 1997 to 2007. 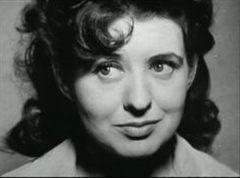 Patricia Frederika Booth, better known by her stage name Pat Phoenix, was an English actress who became one of the first sex symbols of British television through her role as Elsie Tanner, an original cast member of Coronation Street.

Lauren Booth is an English broadcaster, journalist and activist holding a VIP Palestinian Authority passport as well as a British passport.

Confessions from a Holiday Camp is a 1977 British comedy film. It is the last film in the series which began with Confessions of a Window Cleaner. The film was released in North America in 1978 under the title Confessions of a Summer Camp Counsellor. 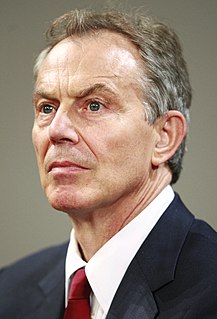 Anthony Charles Lynton Blair is a British politician who served as Prime Minister of the United Kingdom from 1997 to 2007 and Leader of the Labour Party from 1994 to 2007. On his resignation he was appointed Special Envoy of the Quartet on the Middle East, a diplomatic post which he held until 2015. He currently serves as the executive chairman of the Tony Blair Institute for Global Change, established in 2016. As prime minister, many of his policies reflected a centrist "Third Way" political philosophy. He is the only living former Labour leader to have led the party to a general election victory and the only one in history to form three majority governments. 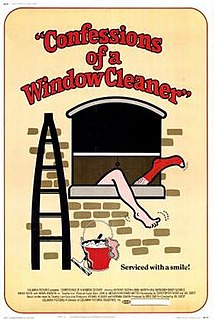 Confessions of a Window Cleaner is a 1974 British sex comedy film, directed by Val Guest. 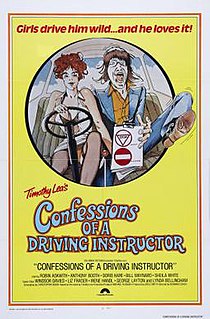 Leo Charles Lynton Blair was an English barrister and law lecturer at Durham University. He was the author of the book The Commonwealth Public Service. He was the father of Tony Blair, the former Prime Minister of the United Kingdom, and of Sir William Blair, a High Court judge. 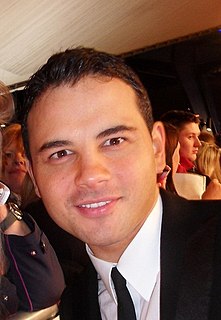 Ryan James Thomas is a former English actor. He is known for portraying the role of Jason Grimshaw on ITV soap opera Coronation Street from 2000 until 2016. In 2018, he played Rafael Humphreys in Australian soap opera Neighbours, and won the twenty-second and final series of Celebrity Big Brother.

The Booth family was an English American theatrical family of the 19th century. Its most famous and well known members were Edwin Booth, one of the leading actors of his day, and John Wilkes Booth, who assassinated Abraham Lincoln. 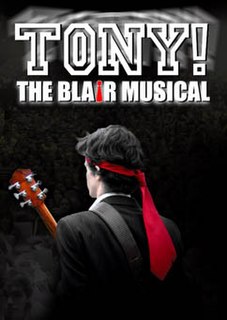 TONY! The Blair Musical is a satirical comedy musical written in 2007 by Chris Bush, director of the White Rose Theatre, with music composed by Ian McCluskey. TONY! follows the premiership of former British prime minister Tony Blair from his landslide election in 1997 to his resignation ten years later.

Alfie Clarke is an English actor, who has appeared as Arthur Thomas in Emmerdale since 22 October 2009.