Born in Southend-on-Sea, Essex, [2] he was educated at Claremont School.

Bullimore moved to Bristol in the early 1960s and married Lalel, a West Indian immigrant. In 1966 they opened the Afro-Caribbean-inspired Bamboo Club, which was billed as "Bristol's Premier West Indian Entertainment Centre", housed a restaurant, theatre workshop, football team and was the headquarters of the Bristol West Indian Cricket Club. The top floor housed the music venue, with DJs playing reggae and American soul music, and bands performed including Bob Marley and The Wailers, Jimmy Cliff, Ben E. King and Tina Turner. [1] [3] The club burned down in 1977, [1] just before the Sex Pistols were due to play there. [3] [4] Bullimore had already opened "The Granary" club at Bristol's Granary building in the early 1970s, which after ten years he slowly sold off to concentrate on other business ventures. He also became a race relations advocate in Bristol. [3] [4]

Bullimore was rescued after capsizing during the 1996–97 Vendée Globe single-handed around-the-world race. The race was marked by a number of incidents, including the death of another contestant, Gerry Roufs.

On 5 January 1997, in the Southern Ocean near 52°S100°E﻿ / ﻿52°S 100°E﻿ / -52; 100﻿ (Tony Bullimore distress) , around 2,500 kilometres (1,300 nmi) off the Australian coast and in winds of up to 160 kilometres per hour (100 mph; 90 kn), [5] Bullimore's boat, Exide Challenger capsized and the majority of press and media reports assumed that the 57-year-old sailor was lost. Bullimore was alive and managed to survive in an air pocket in the upside-down boat in pitch darkness, having lost his food supplies, aside from a bar of chocolate. The Royal Australian Navy launched a rescue mission for Bullimore and another Vendée Globe capsized competitor, Thierry Dubois. On 9 January, Dubois was rescued by an Australian S-70B-2 Seahawk helicopter embarked on the frigate HMAS Adelaide. [6] [7]

Adelaide then proceeded further south to where the Exide Challenger had been located by a RAAF P-3 Orion. Adelaide dispatched a rigid-hulled inflatable boat to the Exide Challenger where crew members knocked on the hull. Hearing the noise, Bullimore swam out from his boat and was quickly rescued by personnel from Adelaide. [8] HMAS Adelaide then returned both Dubois and Bullimore to Perth. [9] During the return journey, Bullimore met with each member of the boat's crew to thank them for saving his life.

In 2000 he was featured in a BBC documentary about crossing the Atlantic Ocean, with the comedian Lenny Henry. [1]

Bullimore skippered a team that came second in the 2005 Oryx Quest. In 2007, he was involved in another sailing record attempt. [10] 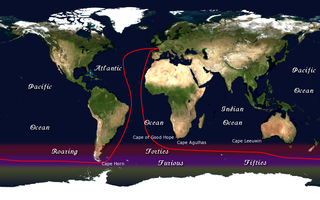 The Vendée Globe is a single-handed (solo) non-stop round the world yacht race. The race was founded by Philippe Jeantot in 1989, and since 1992 has taken place every four years. It is named after the Département of Vendée, in France, where the race starts and ends. The Vendée Globe is considered an extreme quest of individual endurance and the ultimate test in ocean racing. 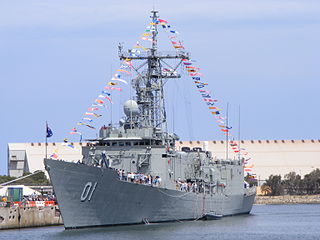 HMAS Adelaide was the lead ship of the Adelaide class of guided missile frigates built for the Royal Australian Navy (RAN), based on the United States Navy's Oliver Hazard Perry-class frigates. She was built in the United States and commissioned into the RAN in 1980.

The Single-handed Trans-Atlantic Race (STAR) is an east-to-west yacht race across the North Atlantic. When inaugurated in 1960, it was the first single-handed ocean yacht race; it is run from Plymouth to the United States, and has generally been held on a four yearly basis. 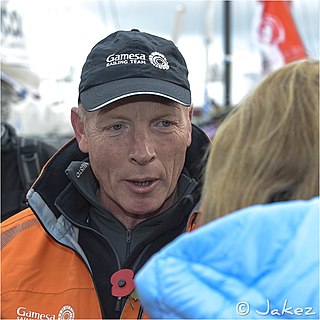 Mike Golding is an English yachtsman, born in Great Yarmouth and educated at Reading Blue Coat School. He is one of the few yachtsmen to have raced round the world non stop in both directions. He held the solo record for sailing round the world westabout between 1994 and 2000. 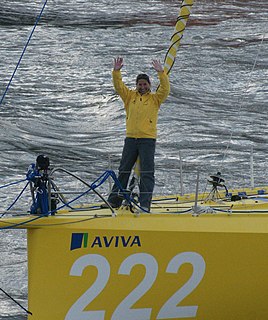 Denise "Dee" Caffari MBE is a British sailor, and in 2006 became the first woman to sail single-handedly and non-stop around the world "the wrong way"; westward against the prevailing winds and currents. In February 2009, Caffari completed the Vendée Globe race and set a new record to become the first woman to sail solo, non-stop, around the world in both directions. 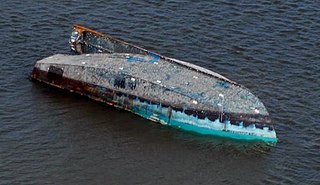 In dinghy sailing, a boat is said to be turtling or to turn turtle when the boat is fully inverted with the mast pointing down to the lake bottom or seabed. The name stems from the appearance of the upside-down boat, similar to the carapace, that is the top shell of a sea turtle. The term can be applied to any vessel; turning turtle is less frequent but more dangerous on ships than on smaller boats. Relative to monohulls, it is more hazardous on multihulls, because of their inherent stability in an inverted position. Measures can be taken to prevent a capsize from becoming a turtle. 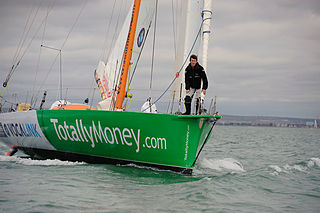 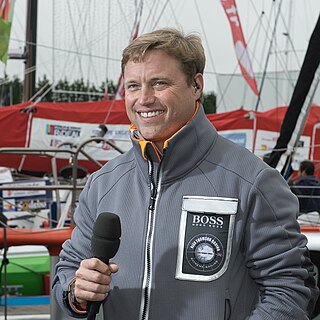 Alex Thomson is a British yachtsman.

Vincent Riou is a French sailor. He is the skipper of PRB, a 60-foot monohull. He won the 2004 edition of the Vendée Globe.

Bruce Schwab is an American sailor and ocean racer. He circumnavigated the globe twice on his Open 60 racing yacht OceanPlanet becoming the 240th and then the 254th solo sailor to do so. Schwab is the first American to officially complete the famous Vendée Globe Race (2004–2005).

Unassisted sailing is a form of sailing, usually single-handed, where sailors are not given any physical assistance during the entire course of the voyage. Sailors may not call at a port, dock with other ships at sea, or be passed any physical objects from a passing ship or aircraft prior to reaching the end destination of their voyage.

Mike Plant was an American single-handed yachtsman. He competed in the BOC Challenge and the Vendée Globe, a single-handed non-stop race around the world. After five years of single-handed sailing, he logged over 100,000 miles at sea and set the record for the fastest solo circumnavigation by an American, with a time of 135 days. In 1992, Plant was preparing to compete in his second Vendée Globe and fourth single-handed circumnavigation aboard Coyote, a powerful Open 60 sloop, and was lost at sea while delivering Coyote from New York Harbor to Les Sables-d'Olonne, France for the starting line. Coyote was found 32 days later, turtled, without the 8,400 lb lead bulb that should have been attached to the keel. At the time of his death, Plant was one of only five people to have completed three solo circumnavigations, joining Bertie Reed, Guy Bernardin, Jean-Luc Van Den Heede and Philippe Jeantot. On September 6, 2002, Plant was inducted into The Single-Handed Sailing Hall of Fame in Newport, Rhode Island. 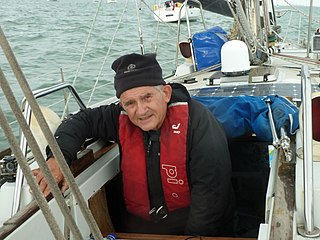 Keith White was a British yachtsman. In October 2015 he set out on a non-stop solo circumnavigation of the world in his yacht, the Marathon, in part to raise funds for charity. White, who was disabled, lost the use of his left arm in 1991 due to a road traffic accident. A sailor since he was 16 years old, he achieved some significant firsts with his circumnavigation of the UK and Ireland, and his circuit of the Atlantic. 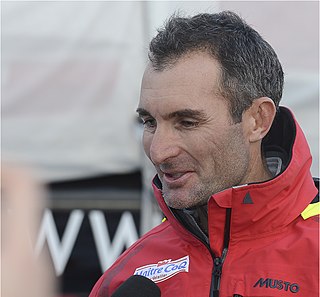 Jérémie Beyou is a French professional Offshore sailor born on 27th June 1976 in Landivisiau (Finistère). He is a member of C N Lorient Sailing Club.

The Vendée Globe is a non-stop solo Round the World Yacht Race for IMOCA 50 and IMOCA 60 class yachts this is the 3rd edition of the race starting on the th November 1996 from Les Sables-d'Olonne. 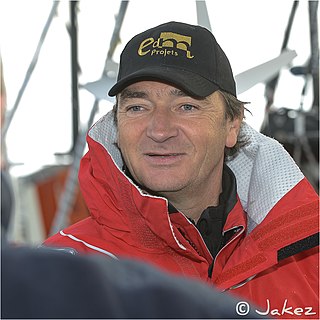 Bertrand de Broc is a French professional sailor born on 23 September 1960 in Quimper. He has long resided in Combrit in the Finistère. He has competed in four Vendee Globe's completing the 2012-2013 Vendée Globe in 9th place. 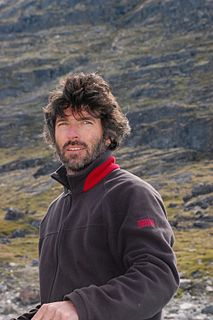 Thierry Dubois is a French sailor born on February 24, 1967 in Saint-Germain-en-Laye. He competed in high level offshore solo races including two uncessfull attempts to complete the Vendee Globe in 1996 and 2000