Castillo signed with the Toronto Blue Jays as an amateur free agent on February 16, 1983, and worked his way through the Blue Jays farm system before making his Major League Baseball debut with the club on August 14, 1988, where he pitched a scoreless inning out of the bullpen in a 6–0 loss to the Kansas City Royals. He earned his first career strikeout against Royals shortstop Kurt Stillwell. On September 3, Castillo earned his first career victory, pitching ​2 1⁄3 innings, allowing no hits and walking two batters, while striking out one in a 7–4 win over the Texas Rangers. Castillo played in 14 games with Toronto, going 1–0 with a 3.00 ERA in 15 innings pitched.

Castillo began the 1989 season with the Blue Jays, however, he struggled with the team, going 1–1 with a 6.11 ERA in 17 games. He did earn his first career save on April 16 against the Kansas City Royals, pitching ​4 2⁄3 innings of scoreless baseball out of the bullpen in a 15–8 win. On August 24, the Blue Jays traded Castillo and Francisco Cabrera to the Atlanta Braves for Jim Acker.

In 1990, Castillo made his first career start on July 24 in the second game of a doubleheader against the Houston Astros, and allowed two runs in ​4 1⁄3 innings pitched, as he had a no-decision in a 9–8 victory. He played in 52 games with Atlanta, starting three of them, as Castillo had a 5–1 record with a 4.23 ERA in ​76 2⁄3 innings pitched.

Castillo began the 1991 season in the Braves bullpen, where he went 1–1 with a 7.27 ERA in seven games before being traded with Joe Roa to the New York Mets for Alejandro Peña on August 28.

Castillo finished the 1991 season strong with the New York Mets, playing in 10 games, starting three of them, as he went 1–0 with a 1.90 ERA in ​23 2⁄3 innings pitched. On January 22, 1992, the Mets traded Castillo and Mark Carreon to the Detroit Tigers in exchange for Paul Gibson and minor leaguer Randy Marshall.

Castillo ran into injury problems in the 1992 season, and did not play in any games with the Tigers. He then spent some time with their Triple-A affiliate, the Toledo Mud Hens of the International League, where he was primarily used as a starting pitcher. On October 15, Castillo was granted free agency.

On January 11, 1993, Castillo rejoined his original team, the Blue Jays. Castillo made 51 appearances as part of the bullpen, going 3–2 record with a 3.38 ERA in ​50 2⁄3 innings pitched en route to the 1993 American League East title. In the championship series, he pitched two scoreless innings in two games, as the Blue Jays defeated the Chicago White Sox and advanced to the 1993 World Series to face the Philadelphia Phillies. Castillo earned the victory in the fourth game of the series, as Toronto won the game 15–14. Overall, Castillo was 1–0 with an ERA of 8.10, allowing three runs in ​3 1⁄3 innings, while Toronto won the World Series championship in six games.

In 1996, Castillo had a record 2–3 with a 4.23 ERA in 40 games out of the bullpen. In August, he was traded by Toronto along Domingo Cedeño to the Chicago White Sox for Luis Andújar and minor leaguer Allen Halley. 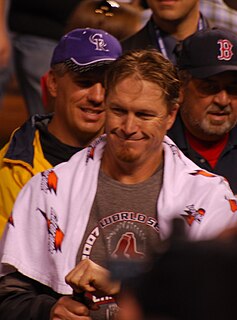 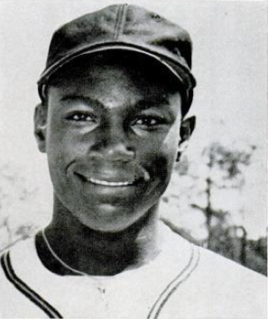 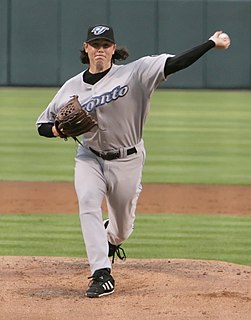 Scott Jeremy Downs is an American former professional baseball relief pitcher. He played in Major League Baseball for the Chicago Cubs, Montreal Expos, Toronto Blue Jays, Los Angeles Angels of Anaheim, Atlanta Braves, and Chicago White Sox. He has been a starter, reliever and closer during his baseball career. 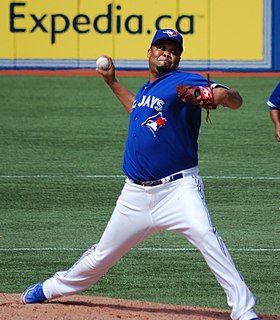 Francisco Javier Cordero is a Dominican former professional baseball pitcher. He played in Major League Baseball (MLB) for the Detroit Tigers, Texas Rangers, Milwaukee Brewers, Cincinnati Reds, Toronto Blue Jays, and Houston Astros from 1999 through 2012, often serving as the closer. On June 1, 2011, Cordero recorded his 300th career save with the Reds, becoming only the 22nd player to reach that mark. He completed his major league career with 329 saves and is a three-time MLB All-Star. 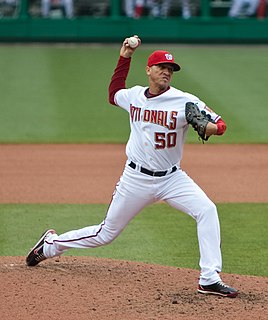 Julián Tavárez Carmen is a Dominican former professional baseball pitcher. He played for 11 franchises over the course of a 17–season Major League Baseball (MLB) career, 1993 to 2009. Listed at 6 feet 2 inches (1.88 m) and 165 pounds (75 kg), he threw right-handed and batted left-handed. 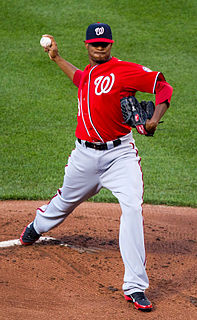 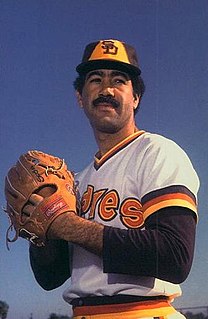 James Justin Acker is a former Major League Baseball pitcher from 1983 to 1992. He played college baseball at the University of Texas.

Scott John Brow is a former pitcher who played in Major League Baseball from 1993 to 1998. He primarily pitched middle relief, but he did start four games in his major league career, three of which were in his rookie season. He graduated from Hillsboro High School in Hillsboro, Oregon, and also graduated from the University of Washington, where he played college baseball for the Huskies from 1988–1990. Brow won the World Series with the Toronto Blue Jays in 1993. Brow was additionally a member of the inaugural Arizona Diamondbacks 1998.

Richard Alan Trlicek is a former Major League Baseball right-handed pitcher. He was selected in the 4th round by the Philadelphia Phillies in the 1987 MLB draft. 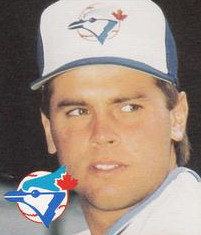 Douglas Warren Linton is a former professional baseball pitcher. He played all or part of seven seasons in Major League Baseball between 1992 and 2003 for the Toronto Blue Jays, California Angels, New York Mets, Kansas City Royals, and Baltimore Orioles, mostly as a relief pitcher. He also played one season in the KBO League for the LG Twins in 2002. He is currently the pitching coach for the Colorado Springs Sky Sox. 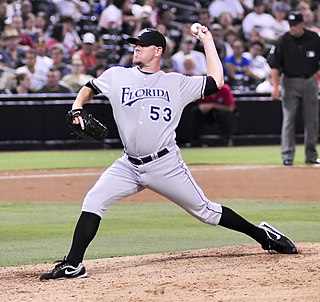 Daniel Livingston Meyer is an American former professional baseball pitcher and current pitching coach for the A advanced Florida Fire Frogs. He played in Major League Baseball (MLB) from 2004 to 2010 for the Atlanta Braves, Oakland Athletics, and Florida Marlins. 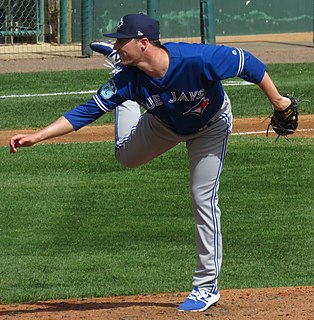 James Clancy is a former starting pitcher in Major League Baseball who played for the Toronto Blue Jays (1977–88), Houston Astros (1989–91) and Atlanta Braves (1991). He batted and threw right-handed.

Kevin John Gausman is an American professional baseball pitcher for the San Francisco Giants of Major League Baseball (MLB). He previously played for the Baltimore Orioles, Atlanta Braves, and Cincinnati Reds. Before his professional career, Gausman attended Louisiana State University (LSU) and played college baseball for the LSU Tigers. The Orioles selected him in the first round of the 2012 MLB draft. He made his MLB debut in 2013. 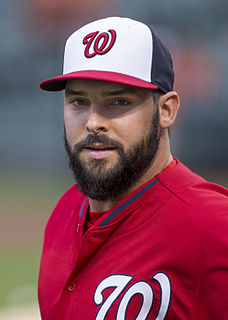 Tanner B. Roark is an American professional baseball pitcher for the Toronto Blue Jays of Major League Baseball (MLB). He previously played for the Washington Nationals, Cincinnati Reds, and Oakland Athletics. He played college baseball at the University of Illinois at Urbana-Champaign. 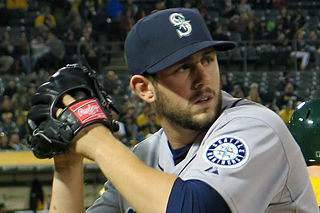 Dominic Joseph Leone is an American professional baseball pitcher for the San Francisco Giants organization. The Seattle Mariners selected Leone in the 16th round of the 2012 Major League Baseball draft. He made his MLB debut in 2014. He has played in Major League Baseball (MLB) for the Seattle Mariners, Arizona Diamondbacks, Toronto Blue Jays St. Louis Cardinals, and Cleveland Indians. Prior to playing professionally, Leone played college baseball for the Clemson Tigers.