Tony Dantes is a Filipino actor who spent his movie career under LVN Pictures.

LVN Pictures, Inc. is one of the biggest film studios in the history of Philippine cinema and its foremost establishment in motion picture post-production until 2005. In its heyday of motion picture production, LVN Pictures has been compared to that of the Metro-Goldwyn-Mayer Studios (MGM) of Hollywood because it had, under contract, the biggest stars and film craftsmen of the period. This was the oldest living film studio in the Philippines running for 68 years.

Born in 1930, his first movie appearance is El Diablo (The Devil) and Hen. Gregorio del Pilar, a biography of one of the famous Filipino heroes in 1949.

His last film was a Nationalistic movie, Badjao. He portrayed one of the Badjao Tribsmen.

Blessings of the Land is a 1959 Filipino drama film directed by Manuel Silos. It was entered into the 10th Berlin International Film Festival. The film won Best Picture and Best Story from the Filipino Academy of Movie Arts and Sciences. In 1960, it was shown at the Asian Film Festival held in Tokyo. The story was written by Celso Al. Carunungan, while the screenplay was written by Carunungan together with Pablo Naval. The movie was produced by LVN Pictures. 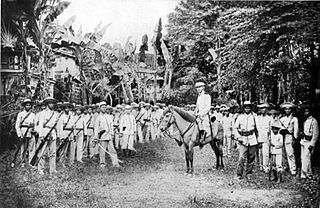 The Battle of Tirad Pass, sometimes referred to as the "Philippine Thermopylae", was a battle in the Philippine–American War fought on December 2, 1899, in northern Luzon in the Philippines, in which a 60-man Filipino rear guard commanded by Brigadier General Gregorio del Pilar succumbed to more than 500 Americans, mostly of the 33rd Volunteer Infantry Regiment under Major Peyton C. March, while delaying the American advance to ensure that President Emilio Aguinaldo and his troops escaped.

Gregorio Hilario del Pilar y Sempio was a Filipino general of the Philippine Revolutionary Army during the Philippine–American War.

Rita Amor is a Filipina supporting actress who mostly appeared in films made by Lvn Pictures. Her career was a short one, spanning only three years.

Teody Belarmino (1922-1984) was a Filipino actor originally from the rustic town of Calamba, Laguna.

José de Villa was a Filipino film actor in the 1950s and a film director in the late 1950s and 1960s. He made his first movie for Sampaguita Pictures in 1947, Maria Kapra, which starred Ángel Esmeralda.

Justina David, sometimes credited as Justiniana David, was a mid 20th century Filipino film actress, often appearing as a martyred wife, a peasant, or a hopeless mother. Her career began before World War II and extended to the late 1960s.

Marcelo H. del Pilar, better known by his pen name Plaridel, was a Filipino writer, lawyer, journalist, and freemason. Del Pilar, along with José Rizal and Graciano López Jaena, became known as the leaders of the Reform Movement in Spain.

La Solidaridad was an organization created in Spain on December 13, 1888. Composed of Filipino liberals exiled in 1872 and students attending Europe's universities, the organization aimed to increase Spanish awareness of the needs of its colony, the Philippines, and to propagate a closer relationship between the Philippines and Spain. 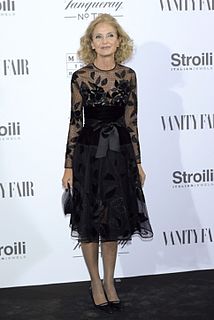 María del Pilar González de Gregorio y Álvarez de Toledo, 15th Duchess of Fernandina, GE, OSI, also known as Pilar Medina Sidonia, is a Spanish noblewoman, writer and socialite, who was Duchess of Fernandina and Grandee of Spain between 1993 and 2012, when her title was revoked as a result of a legal battle with her nephew. Born in Madrid, she is the daughter of Leoncio González de Gregorio y Martí and his wife Luisa Isabel Álvarez de Toledo, 21st Duchess of Medina Sidonia. Her main seat of residence is at González de Gregorio Palace, in Quintana Redonda, Soria. Pilar is a writer, and is the author of many articles and a novel, titled Nápoles 23. Since 2011, Pilar has served as chairman of Christie's Spain.

Francisco V. Coching was a Filipino comic books illustrator and writer and is regarded as one of the “pillars of the Philippine Komiks Industry”. He served as both illustrator and writer for his comic book stories, Coching is referred to as the "King of Komiks", and as the "Dean of Philippine Comics". In 2014, he was posthumously conferred as a National Artist for Visual Arts, the highest honor for artists in the Philippines.

The following lists events that happened during 1899 in the Philippine Republic.

The International Prestige Award of Merit was given to Filipino film productions that have been recognized internationally for their superior cinematic quality and artistry.

BRP Gregorio del Pilar (FF-15) is a frigate of the Philippine Navy and the lead ship of her class. She was the second ship of the Philippine Navy to be named after Gregorio del Pilar, a Filipino revolutionary general known for his role at the Battle of Tirad Pass. She was originally designated as "PF-15" from 2011 to mid-2016 when the PN adopted a new code designation system, re-designating her to "FF-15".

Goyo: The Boy General, also known simply as Goyo, is a 2018 Philippine historical epic film starring Paulo Avelino as the titular "Boy General", Gregorio del Pilar, who died at the historic Battle of Tirad Pass during the Philippine–American War. It is written, directed, edited, and scored by Jerrold Tarog, and is a sequel to the critically and commercially successful 2015 film Heneral Luna, which chronicled Antonio Luna's life. Additional members of the ensemble cast include Carlo Aquino, Mon Confiado, Epy Quizon, Gwen Zamora, Empress Schuck, Alvin Anson, and Rafa Siguion-Reyna. It was released on September 5, 2018.

Tirad Pass: The Last Stand of Gen. Gregorio del Pilar is a 1996 Philippine biographical epic film directed by Carlo J. Caparas and starring Romnick Sarmenta as the titular Gregorio del Pilar, the youngest Filipino general during the Philippine–American War, who died in the Battle of Tirad Pass.