Tony Douglas is a British businessman. He has been the CEO of Etihad Airways since January 2018. [1] [2] He previously served as chief executive of Abu Dhabi Airports Company (2013–2015), and as chief executive of Defence Equipment and Support department in the United Kingdom's Ministry of Defence (2015–2017). [1] He has also held senior positions with airport operator BAA, and as Chief Operating Officer and Group Chief Executive designate of Laing O’Rourke. [3]

His tenure at Etihad Airways has been focused on minimizing losses at the airline. Since his appointment as CEO, he has managed to trim the losses by reducing total costs by $416-million to $6.9-billion. [8]

Douglas holds a Master of Business Administration (MBA) degree from the University of Lancaster. [9] 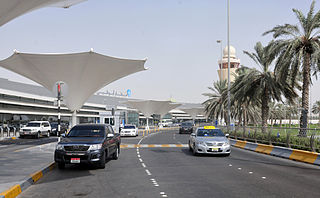 Abu Dhabi International Airport is the sole international airport in the Emirate of Abu Dhabi, the capital of the United Arab Emirates.

Heathrow Airport Holdings is the United Kingdom-based operator of Heathrow Airport. The company also operated Gatwick Airport, Stansted Airport, Edinburgh Airport and several other UK airports, but was forced by the Competition Commission to sell them in order to break up a monopoly. It was formed by the privatisation of the British Airports Authority as BAA Limited as part of Margaret Thatcher's moves to privatise government-owned assets, and was once a constituent of the FTSE 100 Index. 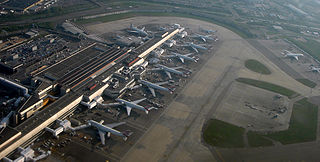 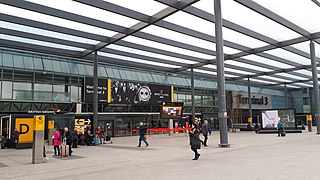 Heathrow Terminal 3 is an airport terminal at Heathrow Airport, serving London, the capital city of the United Kingdom. Terminal 3 is currently used by Oneworld members and a few other non-affiliated airlines. It is also the base for Virgin Atlantic.

Ahmed bin Saif Al Nahyan is a member of the Al Nahyan family in the United Arab Emirates and the founder and was the chairman of Etihad Airways. 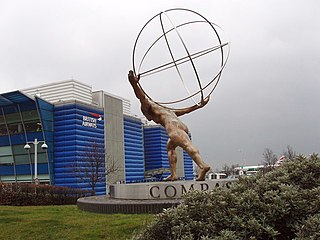 James Reginald Hogan, is an Australian former airline executive. Between 2006 and mid-2017, he was the President and CEO of Etihad Airways, one of the national airlines of the United Arab Emirates (UAE).

Stefan Pichler is a global airline and tourism Chief Executive. Most recently he was President and CEO of Royal Jordanian. Previously, Pichler was the Managing Director and CEO of Air Berlin, served as Managing Director and CEO of Fiji Airways, as the CEO of Jazeera Airways, Chairman and CEO of Thomas Cook AG and Chairman of the Bundesverband der Deutschen Tourismuswirtschaft, as well as Chairman of Fiji Tourism. Additionally, he has held Senior and Executive Board roles as a CCO at Virgin Australia and at Lufthansa.

AGS Airports Limited is the United Kingdom-based owner of Aberdeen, Glasgow and Southampton Airports. The company was formed in September 2014 by Ferrovial, a Spanish firm specialising in the design, construction, financing, operation and maintenance of transport, urban and services infrastructure, and Macquarie Group, an Australian company, composed of diversified financial services. Each own a 50% stake in the company. The company acquired Aberdeen, Glasgow and Southampton Airports in December 2014 from Heathrow Airport Holdings.

Gatwick Airport was in Surrey until 1974, when it became part of West Sussex as a result of a county boundary change. The original, pre-World War II airport was built on the site of a manor in the parish of Charlwood. The land was first used as an aerodrome in the 1920s, and in 1933 commercial flights there were approved by the Air Ministry.

Olivier Brousse, born 28 February 1965, is CEO of the British company John Laing PLC. Since joining the company in March 2014, he has led the successful IPO and float of the website "Infrastructure Investor".

Colin Stephen Matthews CBE FREng is a British businessman, and the Chairman of Highways England, a position he has held since 2014; and EDF Energy.

Anna Marie Stewart was a British businesswoman, CEO of the construction company Laing O'Rourke (2013–2015), and a non-executive director of Babcock International.

Khalid Al Breiki is an Emirati leader specialising in defence technology and the aviation sector. He is currently the President of the Mission Support cluster of EDGE Group, an advanced technology group that develops disruptive solutions for defence and beyond.