Dow was born in the Hollywood neighborhood of Los Angeles, California, the son of Muriel Virginia (Montrose), a stuntwoman in westerns, and John Stevens Dow, a designer, and contractor. [3] In his youth, he trained as a swimmer and was a Junior Olympics diving champion. [4]

With a little stage acting and two television pilots as his only acting experience, Dow's career began when he went on an open casting call and landed the role of Wally Cleaver in Leave It to Beaver. [5] [4] [6] With the exception of the television pilot, for the show's entire run, from 1957 to 1963, he played the older son of June (played by Barbara Billingsley) and Ward (played by Hugh Beaumont) Cleaver, and the older brother of protagonist Theodore "Beaver" Cleaver (played by Jerry Mathers). As played by Dow, Wally was the "all-American" boy—an intelligent, polite teenager, trusted by his parents, popular with his peers, and liked by his teachers. (Wally was based on the series writer Joe Connelly's son, Jay.) [7] In the show's later years, Dow grew into an attractive, athletic young man and was often featured in "heartthrob"-type magazines aimed principally at teen girls. Producers took advantage of Dow's popularity and scripted episodes delving into Wally's dating life, his after-school jobs, his friends, and his car. [8]

After Leave it to Beaver, Dow appeared on other television shows, including My Three Sons , Dr. Kildare , The Greatest Show on Earth , Never Too Young , and on five episodes of Mr. Novak in three different roles. From 1965 to 1968, he served in the U.S. National Guard, interrupting his acting career. On his return to acting, he guest-starred on the television series Adam-12 , Love, American Style , Knight Rider , Square Pegs , The Mod Squad , The Hardy Boys and Emergency!

During the 1970s, Dow continued acting while working in the construction industry, and studying journalism and filmmaking. [6] In 1977, he parodied his role as Wally from Leave it to Beaver in The Kentucky Fried Movie , with Jerry Zucker playing Beaver. [9]

In 1989, Dow made his debut as a director with an episode of The New Lassie . It was followed by episodes of Get a Life , Harry and the Hendersons , Coach , Babylon 5 , Crusade and Star Trek: Deep Space Nine . Dow served as the visual effects supervisor for Babylon 5. In 1996, he provided visual effects for the FOX television movie Doctor Who . [12] [10]

Dow also co-produced The Adventures of Captain Zoom in Outer Space in 1995, and It Came from Outer Space II in 1996.

In addition to acting, directing, producing, and writing, Dow was also a sculptor, creating abstract bronze sculptures. He said about his work: "The figures are abstract and not meant to represent reality, but rather the truth of the interactions as I see and feel them. I find the wood in the hills of Topanga Canyon and each piece evolves from my subconscious. I produce limited editions of nine bronzes using the lost wax process from molds of the original burl sculpture." [13] Reuters wrote of Dow's work that it "features humanlike forms devoid of expression or detail; they are widely open to the viewer’s interpretation." [14]

In December 2008, Dow was chosen as one of three sculptors to show at the Société Nationale des Beaux-Arts exhibition, located in the Carrousel du Louvre in Paris, France. He represented the United States delegation, which was composed of artists from the Karen Lynne Gallery. His sculpture shown at the Parisian shopping mall was titled Unarmed Warrior, a bronze figure of a woman holding a shield. [15]

In the 1990s, Dow revealed that he had suffered from clinical depression. He subsequently starred in self-help videos chronicling this battle, including the 1998 Beating the Blues. [16] Dow was also hospitalized with pneumonia in 2021. [17] [18] [19] 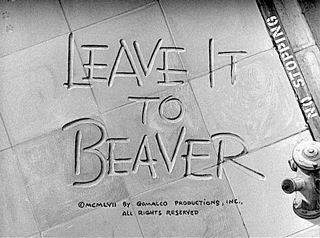 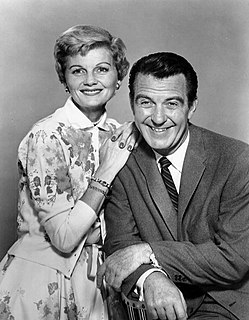 June Evelyn Bronson Cleaver is a principal character in the American television sitcom Leave It to Beaver. June and her husband, Ward, are often invoked as the archetypal suburban parents of the 1950s. The couple are the parents of two sons, Wally and "Beaver". Wally is twelve years old and in the seventh grade when the series opens; Beaver is seven years old and in the second grade. Episodes followed the escapades of Wally and Beaver and usually ended with a moral lesson delivered to the boys, but also often included reminders of childhood and minor lessons for the parents through the adventures of their boys. She was included in Yahoo!'s Top 10 TV Moms from Six Decades of Television for the time period 1957–1963. 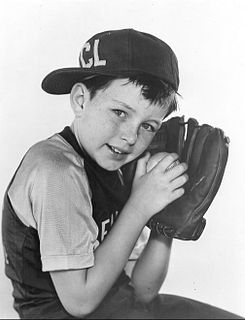 Gerald Patrick Mathers is an American actor best known for his role in the television sitcom Leave It to Beaver, originally broadcast from 1957 to 1963, in which he played the protagonist Theodore "Beaver" Cleaver, the younger son of the suburban couple June and Ward Cleaver and the younger brother of Wally Cleaver.

Barbara Billingsley was an American film, television, voice, and stage actress. She began her career with uncredited roles in Three Guys Named Mike (1951), The Bad and the Beautiful (1952), and Invaders from Mars (1953), and was featured in the 1957 film The Careless Years opposite Natalie Trundy. She then appeared in recurring TV roles, such as The Brothers. 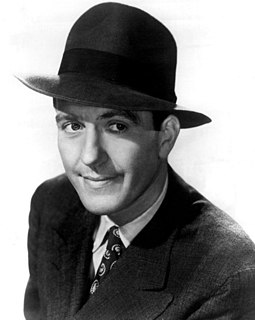 Eugene Hugh Beaumont was an American actor. He was best known for his portrayal of Ward Cleaver on the television series Leave It to Beaver, originally broadcast from 1957 to 1963; and as private detective Michael Shayne in a series of low-budget crime films in 1946 and 1947.

Ward Cleaver Jr. is a fictional character in the American television sitcom Leave It to Beaver. Ward and his wife, June, are often invoked as archetypal suburban parents of the 1950s babyboomers. At the start of the show, the couple are the parents of Wally, a 13-year-old in the eighth grade, and seven-year-old second-grader Theodore, nicknamed "The Beaver". A typical episode from Leave It to Beaver follows a misadventure committed by one or both of the boys, and ends with the culprits receiving a moral lecture from their father and a hot meal from their mother. 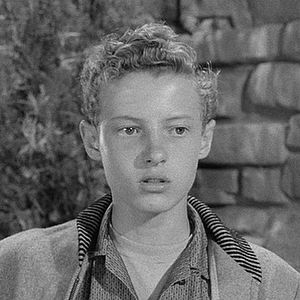 Edward Clark Haskell is a fictional character on the American television sitcom Leave It to Beaver, which ran on CBS from October 4, 1957, to 1958 and on ABC from 1958 to 1963. He was played by Ken Osmond. The character was also featured in the later series Still the Beaver, and in the film remake of the original series. 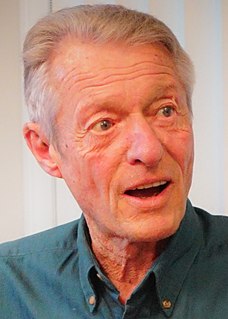 Kenneth Charles Osmond was an American actor and police officer. Beginning a career as a child actor at the age of four, Osmond played the role of Eddie Haskell on the late 1950s to early 1960s television situation comedy Leave It to Beaver and reprised it on the 1980s revival series The New Leave It to Beaver. Typecast by the role, he found it hard to get other acting work and became a Los Angeles police officer. After retiring from police work, he resumed his acting career.

Wallace "Wally" Cleaver is a fictional character in the iconic American television sitcom Leave It to Beaver. Wally is the thirteen-year-old son of archetypal 1950s suburban parents, Ward and June Cleaver and the older brother of the seven-year-old title character, Theodore "Beaver" Cleaver. The characters grew older along with the actors. 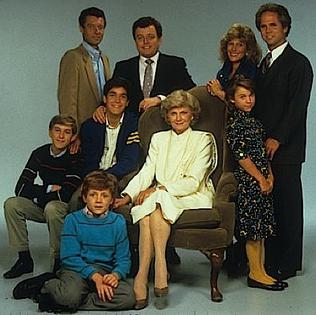 The New Leave It to Beaver is an American sitcom sequel to the original 1957–1963 sitcom Leave It to Beaver. The series began with the 1983 reunion television movie Still the Beaver that aired on CBS in March 1983. The success of the television movie prompted the creation of a revival series, also titled Still the Beaver, that aired on The Disney Channel from 1984 to 1985. In 1986, the series was picked up by TBS, where it aired until June 1989.

Theodore "Beaver" Cleaver is the fictional title character in the American television series Leave It to Beaver. Originally played by Jerry Mathers, Beaver is the son of June and Ward Cleaver and the brother of Wally Cleaver. 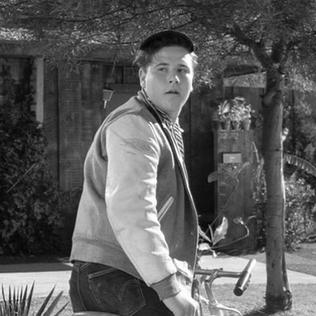 Clarence "Lumpy" Rutherford is a fictional character in the television sitcom Leave It to Beaver. The show aired from October 4, 1957 to June 20, 1963. Lumpy is a bit of a bully and, with Eddie Haskell, is one of Wally Cleaver's friends.

Robert "Rusty" Stevens is an American former child actor best remembered for his role as Larry Mondello, Theodore "Beaver" Cleaver's young friend, in the original Leave It to Beaver television series. Stevens appeared in 67 of the show's 234 episodes, between 1957 and 1960. 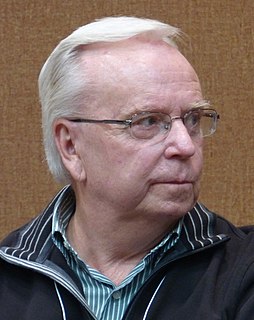 Lucas "Luke" Fafara II, also known as Tiger Fafara, is a former American child actor best known for portraying the role of "Tooey Brown" on the sitcom Leave It to Beaver. 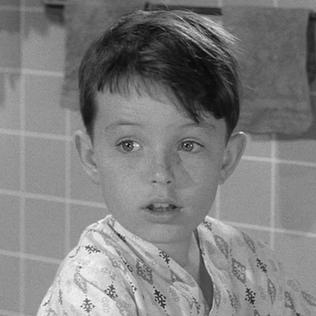 "Family Scrapbook" is the final episode of the American television series Leave It to Beaver. It last aired on ABC on June 20, 1963. It was the 39th episode in the show's sixth and final season, and the 234th episode in the complete series. 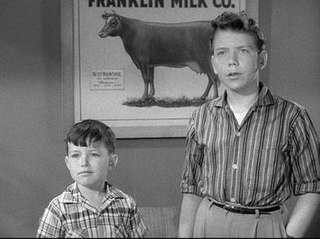 "It's a Small World" is the pilot episode from the iconic American television series Leave It to Beaver (1957–1963). The pilot was first televised April 23, 1957, on the syndicated anthology series, Studio 57, without a laugh track nor the series' well known theme song, "The Toy Parade". It never aired as an episode within the series. Following its April 1957 telecast, the episode was subsequently misplaced and was feared lost until a copy was found in a film vault in Illinois. After rediscovery, it was aired as the third-season premiere for the 1980s TBS revival series The New Leave It to Beaver on October 4, 1987, exactly 30 years after the original series officially premiered on CBS. It was televised again in October 2007 as part of TV Land's 50th anniversary celebration of Leave It to Beaver. It was released to DVD in 2005. The series made its CBS debut several months later on October 4, 1957, with the episode, "Beaver Gets 'Spelled".

Kaleena Kiff is an American actress, producer, and director. Kiff is known for her roles in the sitcoms Love, Sidney and The New Leave It to Beaver.