Tony Fitzpatrick may refer to:

Tony Fitzpatrick is an American artist and actor born and based in Chicago.

Anthony Charles Fitzpatrick is a Scottish former football player and manager. He made a record 351 league appearances for St Mirren in two spells, playing for Bristol City in the two intervening seasons.

Jim Fitzpatrick may refer to:

The surname Fitzpatrick is the known translation of at least two different surnames: Ó Maol Phádraig and Mac Giolla Phádraig from the original Irish to English. Currently, it is ranked as the 60th most common surname in Ireland with an estimated 12,700 individuals bearing the name. While both Mac Giolla Phádraig and Ó Maol Phádraig have similar meanings, they are likely unrelated; yet both have arrived in the modern era as Fitzpatrick. Despite the prefix "Fitz-", Fitzpatrick is not a name of Hiberno-Norman descent. 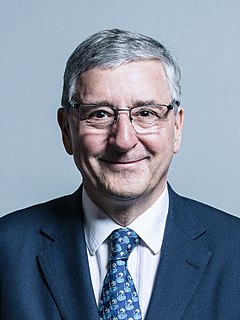 James Fitzpatrick is a British Labour Party politician and former firefighter, who has been the Member of Parliament (MP) for Poplar and Limehouse since the 2010 general election. From 1997 to the 2010 election he was the Member for Poplar and Canning Town.

John Fitzpatrick or FitzPatrick may refer to:

Ryan Joseph Fitzpatrick, is an American football quarterback who is currently a free agent. He was drafted by the St. Louis Rams in the seventh round of the 2005 NFL Draft. Fitzpatrick played college football at Harvard and was the first quarterback in school history to rush for over 1,000 yards in a career.

Tom, Tommy, or Thomas Fitzpatrick may refer to:

Michael Clifford Fitzpatrick is an Australian businessman, sporting administrator and former professional Australian rules football player. He was chairman of the AFL Commission from 2007 to 2017.

Tony Johnson may refer to:

The following is a list of notable deaths in November 2003.

Minkah Fitzpatrick is an American football safety for the Miami Dolphins of the National Football League (NFL). He played college football at Alabama.