Antoine Frangieh (1 September 1941 – 13 June 1978), better known by his diminutive, Tony Frangieh, طوني فرنجية ) was a Lebanese politician and militia commander during the early years of the Lebanese Civil War. He was the son of Suleiman Frangieh, a former Lebanese president.

Frangieh was educated at the College Des Frères Tripoli, first in Tripoli then in Beirut, at the latter from 1958 to 1960. He was furthering his studies before his death.

Frangieh began his career dealing with his family business. [1] On 25 October 1970, he succeeded his father, Suleiman Frangieh, as a member of the Lebanese Parliament for Zgharta, following his father's election to the Presidency. He was also appointed the Minister of Posts and Telecommunications in his father's government. [2]

At the end of the 1960s, when factions within Lebanon started to form militias, the Frangieh clan formed the Marada Brigade, also known as the Zgharta Liberation Army (ZLA), under the command of Tony Frangieh. [1] The Marada/ZLA mainly operated out of Tripoli and northern Lebanon, the base of the Frangieh family.

The Lebanese Civil War witnessed many shifting alliances where the allies of today became the enemies of tomorrow. One such falling out occurred between two of the leading Maronite clans, the Frangiehs and the Gemayels. The Frangiehs, who were close to Syria, [1] were critical of Phalangist Kataeb Regulatory Forces' militia leader Bachir Gemayel's growing alliance with Israel. Militiamen from the Phalange RF and Marada also clashed over protection rackets.

This conflict led to the murder of Tony Frangieh, his wife, Vera (née el Kordahi), and his three-year-old daughter Jihane by Phalangist militiamen, known as the Ehden massacre. [3] His son, Suleiman II, was in Beirut during the murder. [4] [5] [6]

Under cover of darkness on 13 June 1978, a combined force of 1,200 Phalangists led by Elie Hobeika and Samir Geagea, attacked and killed Tony Frangieh and his immediate family, thereby eliminating one of the protagonists vying for political power in the Christian Lebanese community. [7]

Suleiman Frangieh never vowed revenge. As he stated in a documentary on a Lebanese political channel called 'OTV', "That was the past and it must be forgotten, I do not seek revenge because God is the only judge, thus their conscience will haunt them for the rest of their lives."

Many commentators consider the murder of Tony Frangieh to be one of the factors in the longevity of the Lebanese Civil War and as the starting point of a deep divide between Lebanese Christians. Some 20,000 mourners attended his funeral, including then Lebanese Prime Minister Salim Hoss on 14 June 1978. [8] [9]

Frangieh had two children, Suleiman Frangieh Jr. and Jihane, with Vera Frangieh, whom he married in 1962. His son Suleiman first became the Minister of Public Health at the age of 22, and he served as the Ministry of Interior from 2004 to 2005. He is known to have served with the Marada Brigade in the 1980s.

René Moawad was a Lebanese politician who was elected as the 13th President of the Lebanese Republic for 18 days in 1989, from the 5th to 22nd of November; before his assassination by unknown assailants.

The Hundred Days War, also known as La Guerre des Cent Jours in French was a subconflict within the 1977–82 phase of the Lebanese Civil War which occurred in the Lebanese capital Beirut. It was fought between the allied Christian Lebanese Front militias, under the command of the Kataeb Party's President Bachir Gemayel, and the Syrian troops of the Arab Deterrent Force (ADF).

Dory Chamoun is a Lebanese politician who leads the National Liberal Party (NLP), and is also a prominent member of the Qornet Shehwan Gathering, a coalition of politicians, academics, and businessmen who oppose the pro-Syrian March 8 Alliance and Syrian influence in Lebanon. He is the eldest son of late Lebanese president Camille Chamoun and brother of Dany Chamoun. 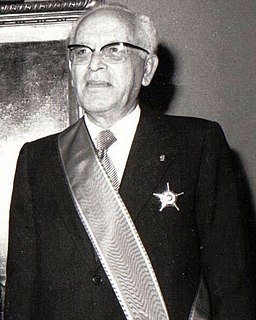 Suleiman Kabalan Frangieh, last name also spelled Frangié,Franjieh, or Franjiyeh, was a Lebanese Maronite politician who was President of Lebanon from 1970 to 1976.

Zgharta, also spelled Zghorta, is a city in North Lebanon, with an estimated population of around 50,000. It is the second biggest city in Northern Lebanon after Tripoli. 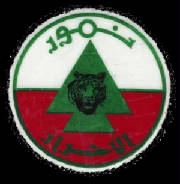 The Tigers Militia, also known as NLP Tigers or Tigers of the Liberals and PNL "Lionceaux" in French, was the military wing of the National Liberal Party (NLP) during the Lebanese Civil War.

The Bus Massacre, also known as the "Ain el-Rammaneh incident" and the "Black Sunday", was the collective name given to a short series of armed clashes involving Phalangist and Palestinian elements in the streets of central Beirut, which is commonly presented as the spark that set off the Lebanese Civil War in the mid-1970s.

The Lebanese Front or Front Libanais in French, was a coalition of mainly Lebanese Nationalist parties formed in 1976 by majority Christian intellectuals during the Lebanese Civil War. It was intended to act as a reaction force to the Lebanese National Movement (LNM) of Kamal Jumblatt and other Left-Wing allies.

Suleiman Tony Frangieh is the current leader of the Marada Movement and a former Member of Parliament for the Maronite seat of Zgharta-Zawyie, in North Lebanon. 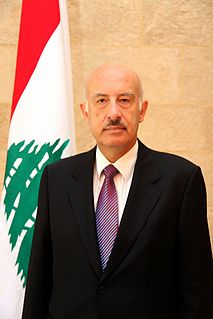 Salim Bey Karam, born on May 21, 1946 in Zgharta, Lebanon was a Minister of State in the Lebanese government. He is also a Member of Parliament for the Maronite Catholic seat of Zgharta-Zawyie, in North Lebanon.

The Zahliote Group – ZG, known also as the Groupement Zahliote (GZ) in French, was a small Lebanese Christian militia raised in the Greek-Catholic town of Zahlé in the Beqaa Valley, which fought in the Lebanese Civil War from 1975 to 1981.

Bachir Pierre Gemayel was a Lebanese Maronite militia commander and politician who was elected President of Lebanon in 1982, a member of the Kataeb Party, also known as the Phalange Party, and the son of its founder Pierre Gemayel.

The Zgharta Liberation Army – ZLA, also known as Zghartawi Liberation Army or Armée de Liberation de Zgharta (ALZ) in French, was the paramilitary branch of the Lebanese Marada Movement during the Lebanese Civil War. The militia was formed in 1967 on President Suleiman Frangieh's instructions as the Marada Brigade seven years before the war began. The force was initially commanded by Suleiman Franjieh's son, Tony Frangieh. It operated mainly out of Tripoli and Zgharta, but it also fought in Beirut. The ZLA fought against various Palestinian and Lebanese Muslim militias as well as the Lebanese Forces in Bsharri and Ehden.

The Tyous Team of Commandos – TTC or simply Tyous for short, was a small far-right Christian militia which fought in the 1975-78 phase of the Lebanese Civil War.

The Kataeb Regulatory Forces – KRF or RF, Forces Regulatoires du Kataeb (FRK) in French, were the military wing of the right-wing Lebanese Christian Kataeb Party, otherwise known as the 'Phalange', from 1961 to 1977. The Kataeb militia, which fought in the early years of the Lebanese Civil War, was the predecessor of the Lebanese Forces.

The Ehden massacre took place on 13 June 1978, part of the 1975–1990 Lebanese Civil War. It was an inter-Christian attack that occurred between the Maronite clans. A Phalangist squad attacked the mansion of the Frangieh family in an attempt to capture Ehden, killing nearly 40 people including Tony Frangieh, his spouse and his three-year old daughter, Jihane. After the massacre, the power of the Frangiehs is reported to have declined.