Tony Franklin may refer to:

Anthony “Tony” Franklin is a former Australian rules footballer who played with South Melbourne in the Victorian Football League (VFL) during the 1970s.

Anthony Wayne Franklin is an American manager in minor league baseball and a former infielder in the minor leagues. He spent eight seasons as manager of the Trenton Thunder, Double-A affiliate of the New York Yankees from 2007 to 2014, and led the Thunder to three Eastern League championships and two additional division titles. In 2015, he was named manager of the Pulaski Yankees in Virginia.

Tony Franklin is an American football coach, currently serving as the offensive coordinator for the Middle Tennessee Blue Raiders of Conference USA after making a move from the same position with the California Golden Bears.

James or Jim Wright may refer to:

Frank Thomas may refer to:

Harry Smith is the name of:

David or Dave Hall may refer to:

Carlos Martínez may refer to:

Blair is an English-language name of Scottish Gaelic origin. The surname is derived from any of the numerous places in Scotland named Blair. These place names are derived from the Scottish Gaelic blàr, meaning "plain" and "field". The given name Blair is unisex and derived from the surname. Blair is generally a masculine name in Scotland, although it is more popular in North America, where it is also a feminine name. A variant spelling of the given name is Blaire. In 2016, in the United States, Blair was the 521st most popular name for girls born that year, and the 1807st most popular for boys.

Michael Clark may refer to:

Bill or Billy Collins may refer to:

James, Jim, Jimmy, or Jamie Collins may refer to:

Purnell is a name shared by:

Frazier is a Scottish surname. Notable people with the surname include:

Frank Johnson may refer to:

Graham is an English and Scottish surname. It is a habitational name, derived from Grantham in Lincolnshire, England. The Scottish Grahams traditionally claimed descent from a chief called Grame, but the first authentic bearer of the name was William of Graham in the 12th century. Notable people with the surname include:

James Conway, Jim Conway, or Jimmy Conway may refer to:

Tony Johnson may refer to:

Kirk is a given name. Notable people with the name include:

McHale is a surname of Irish origin. It refers to: 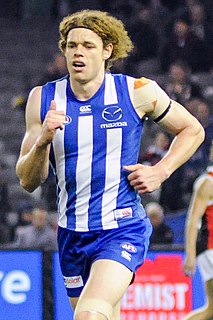 Benjamin Brown is an Australian rules footballer who plays for the North Melbourne Football Club in the Australian Football League (AFL). Brown played his junior Football for the Devonport Football Club. Brown made his debut in round 14, 2014 against Melbourne. Brown kicked a goal in his first game and impressed coach Brad Scott enough to keep his spot the following week. Brown went on to be an influential player in the North Melbourne team in the latter stages of the season with strong performances in the finals series.

Sarge is the nickname of: