Frederick Anthony Owen "Tony" Gaze, DFC & Two Bars , OAM (3 February 1920 – 29 July 2013) was an Australian fighter pilot and racing driver. He flew with the Royal Air Force in the Second World War, was a flying ace credited with 12.5 confirmed victories (11 and 3 shared), and later enjoyed a successful racing career in the UK, Europe and Australia. [1] He was the first ever Australian to take part in a Formula One Grand Prix.

Gaze was born in Melbourne, Victoria, on 20 February 1920, the son of Irvine Gaze, a member of the Ross Sea Party who were preparing for Ernest Shackleton's expedition. [2] [3] He was educated at Geelong Grammar School, and when war was declared in September 1939 he was a student at Queens' College, Cambridge.

Gaze joined the RAF in 1940, and on completion of training and with 122 hours flying time recorded was posted to No. 610 Squadron RAF at RAF Westhampnett in March 1941, flying cross-channel fighter sweeps. Gaze's first 'kill' came on 26 June when he downed a Messerschmitt Bf 109. The next month he claimed two further victories, one half and two probables. For these victories he was awarded the first of three DFCs. His brother, Pilot Officer Scott Gaze had joined No. 610 Squadron RAF with him in early 1941, but was killed in action on 23 March 1941. In November 1941 Gaze was posted to No. 57 OTU as an instructor.

Demotion and escape after being shot down

On 26 September 1942 Gaze led a wing of Spitfires in support of a bombing raid at Morlaix. An Eagle Squadron, No. 131 Squadron RAF, became scattered in high winds and lost 11 of 12 fighters. Gaze was made the scapegoat for the mission failure and was transferred back to No. 616 Squadron as a flight commander. It was later determined that the cause of the high losses on that mission were due to pilot inexperience and unexpected adverse weather.

After a rest from operations in early 1943, he was again posted to an operational Squadron in August 1943, No. 66 Squadron RAF at RAF Kenley. On 4 September 1943 over Le Tréport after downing a Focke Wulf 190 Gaze's own Spitfire V was shot down by Heinz-Gerhard Vogt of II./JG 26 (his 14th claim of an eventual 48). Gaze crash landed 20 miles from Dieppe with slight injuries, evaded capture and made his way, with help from the French Resistance, to neutral Spain.[ citation needed ]

The Me 262 victory resulted in Gaze being awarded the Distinguished Flying Cross for the third time; one of only 47 men in the Second World War. [1]

After a month with No. 41 Squadron RAF in April, on 2 May 1945 he was posted as a flight commander to No. 616 squadron, becoming one of the first Australians (after F/O JN McKay, RAAF) [4] to fly the Gloster Meteor in combat during the closing stages of the war.

During the war he had also flown with some of the most famous names including Wing Commander Douglas Bader, top Allied ace Johnnie Johnson (38 victories) as part of the RAF's Tangmere Wing and Paul Tibbets, pilot of the 'Enola Gay', B29 Bomber that dropped the atomic bomb on Hiroshima.

Gaze ended the war as Australia's tenth ranking highest ace, claiming 12.5 confirmed destroyed (11 and 3 shared (note: below list includes the destruction of a V1)), 4 probables, and 5 damaged in 488 combat missions, all while flying Supermarine Spitfires of various Marks. [5]

In 1946, Gaze suggested to the Duke of Richmond and Gordon, better known as "Freddie March", that the roads around RAF Westhampnett would be a good location for a racing track. Acting on this suggestion, March opened the Goodwood Circuit in 1948. [6] [7]

Gaze returned to Australia after the war, and began racing an Alta racing car that he brought with him. [6] [8]

He raced an Alta Formula 2 in Europe for the 1951 season, switching to an HWM-Alta for the following season, planning to racing again in F2. [6] When the sports governing body decided to change the World Championship regulations from Formula One to Formula 2, [9] Gaze’s plans changed as well. He took part in a number of non-championship F1 events, and then in June travelled to the Circuit de Spa-Francorchamps for the Grote Prijs van Belgie. After qualifying the HWM-Alta 16th, he raced one place better, attaining 15th place. [10] By racing in Spa, Gaze became the first Australian to contest a World Championship motor race. [11] This was followed by appearances in the RAC British Grand Prix [12] and the Groβer Preis von Deutschland, [13] although he failed to qualify for the Gran Premio d’Italia. [11] [14]

The following year, he was a member of the first Australian crew to attempt the Rallye Monte Carlo in a Holden FX with Lex Davison and Stan Jones. [15] [16] At one point, the trio was in the top ten, but finished the event in 64th. [8] Also that season, he raced an Aston Martin DB3 in sports car events across Europe, [11] and survived an accident in the Grande Prémio de Portugal, when his car struck a tree after a collision with a Ferrari. He was thrown clear as the Aston flipped over and burst into flames. Gaze was carried to safety by spectators, and suffered only cuts and bruises. [17]

In 1954 and 1955, Gaze raced the ex-Ascari Ferrari 500 F2 in non-championship events in Europe, Australia and New Zealand. [8] [11] On his return to England, he set up the Kangaroo Stable, the first Australian international racing team. One team member was a young Jack Brabham. They ran Aston Martin DB3S. [11] [17] However, many races were cancelled after the Le Mans disaster, and the Stable disbanded at the end of the season. [8] Gaze continued to race for another season. [18]

After a conversation with Prince Bira, who was an avid glider competitor, Gaze tried his hand at the sport. He became an active member of the Bristol and Gloucestershire Gliding Club, at Nympsfield and went on to represent Australia in the 1960 World Gliding Championships, which was held at the Butzweiler airfield, near Köln. [8]

Tony Gaze was married twice; to Kay Wakefield who died in 1976 and to fellow racing car driver Diana Davison who died in 2012. Davison was the widow of Lex Davison. [29] Gaze was also step-grandfather to the third generation of Davison racing drivers, Alex, Will and James. 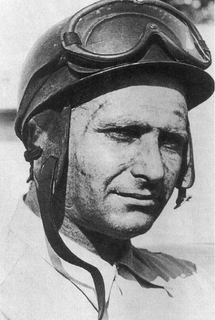 Alberto Ascari was an Italian racing driver and twice Formula One World Champion. He was a multitalented racer who competed in motorcycle racing before switching to cars. Ascari won consecutive world titles in 1952 and 1953 for Scuderia Ferrari. He was the team's first World Champion and the last Italian to date to win the title. This was sandwiched by an appearance in the 1952 Indianapolis 500. Ascari also won the Mille Miglia in 1954. Ascari was noted for the careful precision and finely-judged accuracy that made him one of the safest drivers in a most dangerous era. 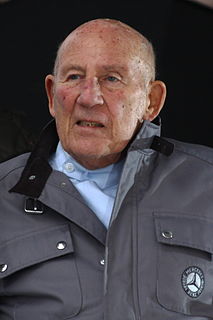 George Edgar Abecassis was a British racing driver, and co-founder of the HWM Formula One team. 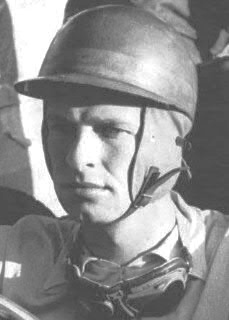 Roy Francesco Salvadori was a British racing driver and team manager. He was born in Dovercourt, Essex, to parents of Italian descent. He graduated to Formula One by 1952 and competed regularly until 1962 for a succession of teams including Cooper, Vanwall, BRM, Aston Martin and Connaught. Also a competitor in other formulae, he won the 1959 24 Hours of Le Mans in an Aston Martin with co-driver Carroll Shelby.

Major Anthony Peter Roylance Rolt, MC & Bar, was a British racing driver, soldier and engineer. A war hero, Rolt maintained a long connection with the sport, albeit behind the scenes. The Ferguson 4WD project he was involved in paid off with spectacular results, and he was involved in other engineering projects. At his death, he was the longest surviving participant of the first ever World Championship Grand Prix at Silverstone in 1950. He was one of the last pre-war winners remaining too – he won the 1939 British Empire Trophy, aged just 20 in 1939 – this was after he started his career in 1935, as a 16-year-old, in a 3-wheeler Morgan in speed trials. He won the 1953 24 Hours of Le Mans and participated in three Formula One World Championship Grands Prix. 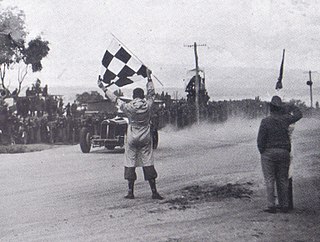 Peter Douglas Conyers Walker was an English racing driver. He was born in Huby, Yorkshire and died in Newtown, Worcestershire. He proved a strong driver in most disciplines, but was most adept in sports cars, winning the 1951 24 Hours of Le Mans race, and the Goodwood Nine-Hours in 1955. He effectively retired after a crash in 1956 left him with serious injuries.

Frank Williams Racing Cars was a British Formula One team and constructor.

William Davison is an Australian professional racing driver. He will drive a Ford Mustang GT for Dick Johnson Racing in the Repco Supercars Championship in 2021. Davison is a two-time winner of the Bathurst 1000, in 2009 and 2016.

The 1965 New Zealand Grand Prix was a motor race held at the Pukekohe Park Raceway on 9 January 1965. The race was held over 50 laps of the 3.5 km (2.2 mi) combined circuit for a total distance of 175 km (110 mi). The Grand Prix was run for open wheel racing cars, specifically conforming to either the 2.5 litre Tasman Formula regulations or the 1.6 litre New Zealand National Formula regulations. 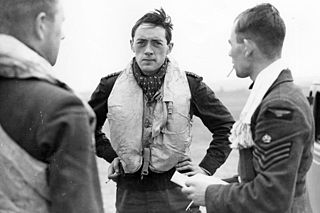 Brian John Edward "Sandy" Lane was a fighter pilot and flying ace of the Royal Air Force during the Second World War. He was also an author.

The Mildren name was used on a series of racing vehicles constructed for, or acquired by, Australian racing team owner Alec Mildren during the 1960s and early 1970s. 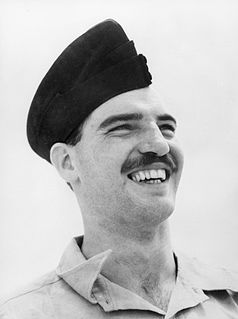 Alan Charles Rawlinson, was an Australian airman who became a fighter ace in World War II. He was credited with at least eight aerial victories, as well as two aircraft probably destroyed, and another eight damaged. Born in Fremantle, Western Australia, Rawlinson joined the Royal Australian Air Force in 1938. He was posted to the Middle East in July 1940 and saw action with No. 3 Squadron, flying Gloster Gladiator and Gauntlet biplanes initially, and later Hawker Hurricanes and P-40 Tomahawks. Twice credited with shooting down three enemy aircraft in a single sortie, he was awarded the Distinguished Flying Cross (DFC) in October 1941 and took command of No. 3 Squadron the next month. He received a bar to his DFC in December 1941, and returned to Australia in March 1942.