Tony or Anthony Gregory may refer to:

Tony Gregory was an Irish independent politician, and a Teachta Dála (TD) for the Dublin Central constituency from 1982 to 2009.

Anthony Stevens is a former Australian rules footballer who played for the North Melbourne Kangaroos. He was named as ruck rover in the club's official 'Team of the Century'. 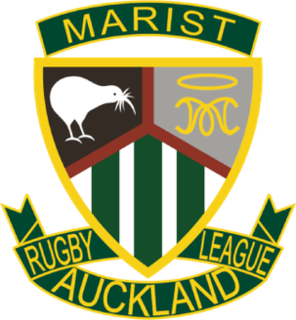 The Marist Saints is a rugby league club based in Mount Albert, New Zealand. They regularly feature in the Fox Memorial, the premier division in Auckland Rugby League. However, they are going through a rebuilding phase and after competing in the 2nd tier competition Sharman Cup in 2010, they have now been promoted to the top Auckland rugby league competition, The Fox Memorial Shield.

Anthony is an English surname. It derived from the Antonius root name. The early origin of the name traces back to Lincolnshire. Notable people with the surname include:

Anthony or Tony Byrne is the name of:

Anthony Edwards may refer to:

Anthony Charles Gregory was an English football player, coach and manager. He played as a wing half and as a winger. During his career he played for Vauxhall Motors, Luton Town, Watford, Bexley United, Bedford Town, Hastings United and Dover. He also served as a player-coach for Hamilton Steelers and Barnet, and as player-manager for Stevenage Town and Wolverton.

Tony Brooks may refer to:

Anth is a nickname. People with this name include the following: