Hiller was best known for writing and/or producing numerous hits for Brotherhood of Man, including "United We Stand" (1970), [6] [7] "Save Your Kisses for Me" (1976), [6] "Angelo" (1977), [8] and "Figaro" (1978). [8] The song "United We Stand" [6] is considered a worldwide standard and has been recorded by over 100 different artists. Thirty years after the original hit, the song was popularized again by becoming a patriotic and spiritual anthem, and was recorded by several more artists. It was used numerous times in the production of various network news broadcasts during coverage of the 9/11 events.

Hiller also wrote "Caroline" recorded by The Fortunes on Decca Records in 1964 which became famous as the theme tune for the North Sea pirate station Radio Caroline and is still used as the station theme today.[ citation needed ]

Over 500 other artists have recorded Hiller's songs including Elton John, Olivia Newton-John, Andy Williams, Ray Stevens, The Miracles, The Hollies, Sonny and Cher, The Osmonds, Glen Campbell, Crystal Gayle, Anne Murray, and Ed Bruce. [5] He won three Ivor Novello Awards and a Gold Badge Award for his services to the British music industry. [1]

Brotherhood of Man are a British pop group who achieved success in the 1970s. They won the 1976 Eurovision Song Contest with "Save Your Kisses for Me".

Lynsey de Paul was an English singer-songwriter and producer. She had chart hits in the UK and Europe in the 1970s, starting with the UK top 10 single "Sugar Me", becoming the first British female artist to achieve a number one with a self-written song. She represented the UK in the 1977 Eurovision Song Contest, scoring another chart-topping hit in Switzerland and had a successful career as a two-time Ivor Novello Award-winning composer, record producer, actress and television celebrity.

John Barry Mason is an English songwriter; he grew up in the village of Coppull, near Chorley in Lancashire. A leading songwriter of the 1960s, he wrote the bulk of his most successful songs in partnership with Les Reed. Mason gained many gold and platinum awards for his work including five Ivor Novello Awards, the most recent of them in 1998. 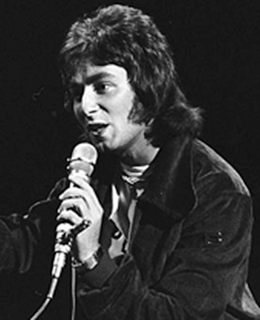 Barry Blue is an English singer, producer, and songwriter. As an artist, he is best known for his hit songs "Dancin' " and "Do You Wanna Dance".

William Wylie MacPherson, known professionally as Bill Martin, was a Scottish songwriter, music publisher and impresario. His most successful songs, all written with Phil Coulter, included "Puppet on a String", "Congratulations", "Back Home", and "Saturday Night". He was presented with three Ivor Novello Awards, including one as Songwriter of the Year.

Roger John Reginald Greenaway, is an English songwriter and record producer, best known for his collaborations with Roger Cook. His compositions have included "You've Got Your Troubles" and the transatlantic million selling songs "I'd Like to Teach the World to Sing " and "Long Cool Woman in a Black Dress". They were the first UK songwriting partnership to be granted an Ivor Novello Award as 'Songwriters of the Year' in two successive years.

Frank John Musker is a British songwriter and composer. Most prolific in the 1980s and 1990s, he worked with artists such as Sheena Easton, The Babys, Robert Miles, Jennifer Rush, Bucks Fizz, Air Supply, Lucio Battisti, Zucchero, Lisa Stansfield and Brian May. His collaboration with May was awarded Best Song Musically and Lyrically at the 1997 Ivor Novello Awards.

Tom Springfield is a retired English musician and songwriter from the 1960s folk and pop music scene. He is the brother of pop star Dusty Springfield, with whom he performed in The Springfields.

Harold Jacob Spiro was an English songwriter. He is best known for his co-writing with Valerie Avon, particularly the song "Long Live Love" (1974) performed by Olivia Newton-John, which was the UK's entry in the Eurovision Song Contest 1974.

Martin Lee is a singer-songwriter, best known as a member of the British pop group Brotherhood of Man.

Lee Sheriden is a British singer/songwriter and musical director, best known as a member of pop group Brotherhood of Man.