Tony Jaa was born and raised in a rural area in Surin Province to Rin Saipetch and Thongdee Yeerum. [4] He is of Kuy descent, a Mon–Khmer ethnic group that inhabits Thailand, Cambodia and Laos. He is capable of speaking Kuy, Thai and Cambodian. [5]

In his youth, Jaa watched films by Bruce Lee, Jackie Chan and Jet Li at temple fairs, which was his inspiration to learn martial arts. He was so inspired by them that while he was doing chores or playing with friends, he would imitate the moves that he had seen, practicing in his father's rice paddy.[ citation needed ]

Jaa began training in Muay Thai at the local temple from age 10 and at age 15 he requested to become a protégé of stuntman and action film director Panna Rittikrai. [2] Panna had instructed Jaa to attend Maha Sarakham College of Physical Education in Maha Sarakham Province from which he graduated with a bachelor's degree. [8] [9] [10]

Tony initially worked as a stuntman for Muay Thai Stunt for 14 years, appearing in many of Panna's films. He doubled for Sammo Hung when the martial-arts actor made a commercial for an energy drink that required him to grasp an elephant's tusks and somersault onto the elephant's back. [11] He was also a stunt double in the Thai television series Insee Daeng (Red Eagle). [12]

Together, Panna and Jaa developed an interest in Muay Boran, the predecessor of muay thai and worked and trained for four years at the art with the intention of developing a film about it. Eventually they were able to put together a short film showing what Jaa could do with the help of instructor Grandmaster Mark Harris. One of the people they showed it to was producer-director Prachya Pinkaew.[ citation needed ]

This led to Ong-Bak: Muay Thai Warrior in 2003, Jaa's break-out role as a leading man. Jaa did all the stunts without mechanical assistance or computer-generated effects and it showcased his style of extreme acrobatics and speedy, dance-like moves. Injuries suffered in the filming included a ligament injury and a sprained ankle. One scene in the film involved fighting with another actor while his own trousers were on fire. "I actually got burned," he said in a 2005 interview. "I really had to concentrate because once my pants were on fire the flames spread upwards very fast and burnt my eyebrows, my eyelashes and my nose. Then we had to do a couple more takes to get it right." [13]

His second major movie was Tom-Yum-Goong (The Protector in the US), named after Tom yum soup, which included a style of Muay Thai that imitates elephants.

In August 2006, he was in New York to promote the US release of The Protector , including an appearance at the Museum of the Moving Image. [14]

Sahamongkol Film International advertised that Tony Jaa's third film would be called Sword or Daab Atamas, about the art of Thai two-sword fighting ( daab song mue ), with a script by Prapas Chonsalanont. [15] But due to a falling out between Prachya and Jaa, which neither have publicly commented on, Sword was cancelled. [16]

Jaa's films captured the attention of his hero, Jackie Chan, who asked director Brett Ratner to cast Jaa in Rush Hour 3 . "I gave the director videos of Tony Jaa because I think Tony Jaa is the most well-rounded of all action stars," Chan told the Associated Press. [20] "The director liked him a lot," Chan said. [20] However, Jaa said he'd be unable to participate because of scheduling conflicts with the shooting of Ong Bak 2. [20] [21]

While Jaa and Amogelang were working on Ong-Bak 2, director Prachya Pinkaew and action ya choreographer Panna Rittikrai were working on Chocolate , starring a female martial artist, Nicharee Vismistananda and released 6 February 2008. [16] Jaa had been cast in a small role in a third installment of the King Naresuan film series directed by Chatrichalerm Yukol, although the film was ultimately cancelled. Ong Bak 3 was released in 2010 and provides a conclusion to this Thai trilogy.

After leaving the monastery, Jaa accepted a deal with Sahamongkol film company. He filmed Tom Yum Goong 2 for them, with Chocolate star Jija Yanin in a major role too, the first time Jaa has shared the big screen with another international martial arts star. Director Prachya Pinkaew and choreographer Panna Rittikrai also returned for this film. [23]

In 2013, Jaa teamed up with Dolph Lundgren in the Thai western-comedy A Man Will Rise (which remains unfinished) and in 2014 in Lundgren's pet project Skin Trade . [24] Then Jaa co-starred in the blockbuster action film Furious 7 , directed by James Wan. Jaa also teamed up with fellow actors Louis Koo and Wu Jing in Hong Kong-Chinese action film SPL II . [25]

In October 2016, Jaa co-starred with Louis Koo again in Paradox, the third part of the SPL series .

Tony Jaa officially registered his marriage to longtime girlfriend Piyarat Chotiwattananont on 29 December 2011. The wedding ceremony was held on 3 May 2012. The couple have 2 daughters. [29]

Ong-Bak: Muay Thai Warrior, also known in the United States as Ong-Bak: The Thai Warrior is a 2003 Thai martial arts film directed by Prachya Pinkaew, featured stunt choreography by Panna Rittikrai and starred Tony Jaa. Ong-Bak proved to be Jaa's breakout film, with the actor hailed internationally as the next major martial arts star. Jaa went on to star in Tom-Yum-Goong and directed and starred in two prequels to Ong-Bak: Ong-Bak 2 and Ong-Bak 3.

Tom-Yum-Goong is a 2005 Thai martial arts action film starring Tony Jaa. The film was directed by Prachya Pinkaew, who also directed Jaa's prior breakout film Ong-Bak. As with Ong-Bak, the fights were choreographed by Jaa and his mentor, Panna Rittikrai. The film was distributed as Warrior King in the United Kingdom, as The Protector in the United States, as Thai Dragon in Spain, as Revenge of the Warrior in Germany, and as Honor of the Dragon in Russia and CIS countries. In India, it was named Haathi Mere Saathi, from a name of another Bollywood film starring Rajesh Khanna. 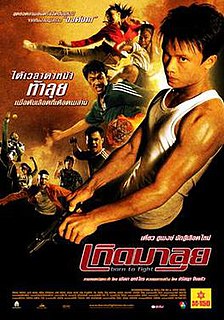 Born to Fight is a 2004 Thai action film directed by Panna Rittikrai. It followed Ong-Bak: Muay Thai Warrior, on which Panna served as martial arts choreographer, and featured more of his "no strings attached" stuntwork. Many of the actors in Born to Fight were Thai national athletes. The film was a remake in name only of one of Panna's first film, Gerd ma lui, released in 1984. While the remake contains a couple of similar stunts to the original, the two films are otherwise unrelated.

Pumwaree Yodkamol is a Thai film and television actress. She co-starred in Ong-Bak: Muay Thai Warrior, portraying Muay Lek alongside Tony Jaa. Other roles include The Bodyguard, where she played Pok, and Pisaj, in the role of Oui. 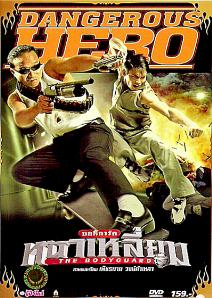 The Bodyguard is a 2004 wire fu action comedy film written and directed by Thai comedian and actor Petchtai Wongkamlao and featuring martial-arts choreography by Panna Ritikrai. It is followed by the 2007 prequel, The Bodyguard 2. 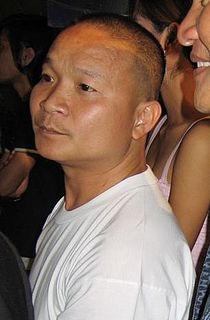 Muay Thai Stunt is a Thailand-based group of stunt doubles, formed by Panna Rittikrai to work alongside him on action films. Members of the stunt team are skilled in acrobatics and gymnastics, parkour, weapons-related fighting arts, Muay Thai and other martial arts including Wushu and Tae Kwon Do. The stunt team specializes in fight choreography, fall stunts, wire-work, vehicular stunts and explosion stunts. A trademark of Panna's films is the use of full contact rather than pulling punches or the use of camera tricks in the fight scenes. 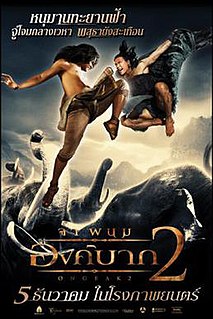 Ong Bak 2: The Beginning is a 2008 Thai martial arts film co-directed by Panna Rittikrai and Tony Jaa. Starring Jaa, it is a standalone prequel to the 2003 film Ong-Bak: Muay Thai Warrior. Set in 15th century Thailand, the film revolves around Tien, the son of a murdered nobleman. Captured and sold into slavery, Tien is saved from death by Chernang, the leader of the Pha Beek Khrut, a group of martial artists specialising in various Asian combat styles. Chernang takes Tien under his wing and realizes unsurpassed physical potential in the boy by training him in all the different types of Asian martial arts. When Tien grows up, he goes on a lone mission of vengeance against the slave traders and the treacherous warlord who killed his family.

Mercury Man is a 2006 Thai superhero martial arts action film. It is directed by Bhandit Thongdee with martial arts choreography by Panna Rittikrai of Ong-Bak, Tom-Yum-Goong and Born to Fight.

Sahamongkol Film International Co. Ltd. is a Thai motion picture production and distribution company. It is the leading movie company in Thailand, ahead of GMM Grammy's GDH 559, Five Star Production and RS Film.

Chupong Changprung is a Thai martial arts film actor. He is also known by his Westernized name, Dan Chupong. Starting out as part of the stunt team of martial-arts choreographer Panna Rittikrai, Chupong's first film credit was as "Bodyguard 4" in Ong-Bak: Muay Thai Warrior. He then went on to leading roles in the 2004 film, Born to Fight and 2006 film Dynamite Warrior. He has also appeared in Nonzee Nimibutr's Queen of Langkasuka (2008), Somtum (2008), Ong Bak 2 (uncredited) and portrayed the main antagonist in Ong Bak 3. He graduate bachelor's degree from Srinakarinwirot Institute of Physical Education

Chocolate, also known as Zen, Warrior Within, is a 2008 Thai martial arts film starring Yanin "Jeeja" Vismistananda in her debut film performance. It is directed by Prachya Pinkaew, with martial arts choreography by Panna Rittikrai. It also stars Hiroshi Abe and Pongpat Wachirabunjong.

Yanin "Jeeja" Vismitananda, née Nicharee Vismitananda, is a Thai actress and martial artist. She specializes in Muay Thai. She is credited as Yanin Mitananda in Chocolate. 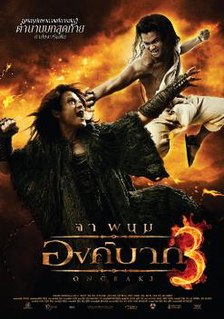 Ong-Bak 3 is a 2010 Thai martial arts film directed, produced and written by Tony Jaa and Panna Rittikrai. The film is a sequel to Ong Bak 2 (2008) and follows the story of the warrior Tien, who had been captured by the ruthless warlord Lord Rajasena. Tien escapes from Rajasena's clutches, recovers from his crippling injuries with the help of Master Bua, and returns to confront Bhuti Sangkha, who has replaced Rajasena as the primary villain.

Tom Yum Goong 2, known in the USA as The Protector 2, in the UK as Warrior King 2 and in Germany as Return of the Warrior. It is a 2013 Thai martial arts film directed by Prachya Pinkaew. The film is a sequel to Pinkaew's Tom-Yum-Goong, with actors Tony Jaa and Petchtai Wongkamlao reprising their roles as Kham and Mark from the first movie.

Ron Smoorenburg is a Dutch martial artist and actor. He is best known for his film debut as the high-kicking henchman in the final fight of Jackie Chan's Who Am I? in 1998. He currently lives in Thailand, where he works as an actor, stuntman, and fight choreographer.