Tony Janiro (born Anthony Gianiro; February 2, 1926 – February 21, 1985) was an Italian-American middleweight boxer from Youngstown, Ohio. Janiro never won a championship, although he faced many of the top fighters of his era. Despite his reputation as a playboy who avoided training, Janiro compiled a record of 83 wins (26 KOs), 11 losses, and two draws. [1]

Janiro was born in Springdale, Pennsylvania, but his family relocated to Youngstown when he was four years old. [1] He left Youngstown for New York at the age of 16 to pursue a career in boxing. [2] Janiro received advice and assistance from fellow Youngstown native Lenny "Boom Boom" Mancini (father of Ray Mancini), who introduced Janiro to his manager, Frankie Jacobs, and boxing trainer Ray Arcel. [2] In the 1940s, Janiro was ranked among the top 10 middleweights and fought Hall of Famers such as Rocky Graziano, Jake LaMotta, and Kid Gavilan. [1] During one bout at Madison Square Garden, the young boxer was introduced to ringside fan Harry S. Truman, then President of the United States. [2] Janiro had one draw with Graziano, who knocked him out in 1951. [3] He fought from 1943 to 1952.

After his retirement, he worked as a bartender at the Neutral Corner, a bar located near Stillman's Gym that was frequented by boxing managers and trainers. [1] (The bar is often referred to in journalist A.J. Liebling's boxing articles.) Several years before his death, Janiro returned to Youngstown, where he was employed at the Mahoning County Courthouse. [1] In 1984, he was inducted into the Youngstown Curbstone Coaches Hall of Fame, and was honored at a testimonial banquet held in Boardman, Ohio. [1] Speakers at the event included former boxing champions Willie Pep, Jake LaMotta, Beau Jack, and Carmen Basilio. [2]

Tony Janiro died of kidney failure after suffering a heart attack in his home in the spring of 1985. [1] He was survived by his sister, Mrs. Amelia Marian; a brother, Frank of Youngstown, and granddaughter Tracy Janiro Zingaro. [1] Funeral services for Janiro were held at St. Christine's Roman Catholic Church, in Youngstown. [1]

Janiro was portrayed by Kevin Mahon in Martin Scorsese's biopic of Jake LaMotta, Raging Bull (1980). In the film the comment of LaMotta's wife that Janiro looks handsome leads to a jealous rage, culminating in a brutal fight by LaMotta. 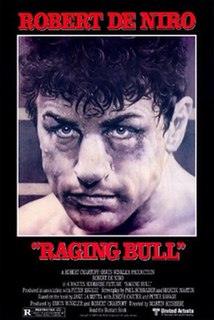 Ray Mancini, best known as "Boom Boom" Mancini, is an American former professional boxer who competed professionally from 1979 to 1992 and who has since worked as an actor and sports commentator. He held the WBA lightweight title from 1982 to 1984. Mancini inherited his nickname from his father, boxer Lenny Mancini. In 2015, Ray was inducted into the International Boxing Hall of Fame. 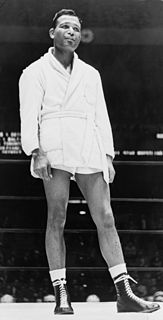 Sugar Ray Robinson was an American professional boxer who competed from 1940 to 1965. He was inducted into the International Boxing Hall of Fame in 1990. He is widely regarded as one of the greatest boxers of all time, if not the greatest pound-for-pound boxer to ever enter a ring. 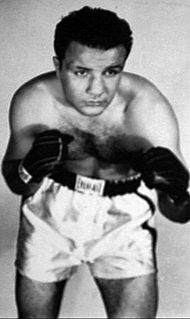 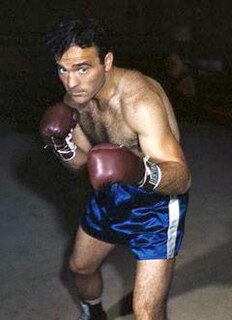 Thomas Rocco Barbella, better known as Rocky Graziano, was an Italian-American professional boxer who held the World Middleweight title. Graziano is considered one of the greatest knockout artists in boxing history, often displaying the capacity to take his opponent out with a single punch. He was ranked 23rd on The Ring magazine list of the greatest punchers of all time. He fought many of the best middleweights of the era including Sugar Ray Robinson. His turbulent and violent life story was the basis of the 1956 Oscar-winning drama film, Somebody Up There Likes Me, based on his 1955 autobiography of the same title.

Anthony Florian Zaleski, known professionally as Tony Zale, was an American boxer. Zale was born and raised in Gary, Indiana, a steel town, which gave him his nickname, "Man of Steel". In addition, he had the reputation of being able to take fearsome punishment and still rally to win, reinforcing that nickname. Zale, who held the World Middleweight title multiple times, was known as a crafty boxer and strong body puncher who punished his opponents and steadily wore them down before knocking them out.

Tiberio Mitri was an Italian boxer who fought from 1946 to 1957. During his career, Mitri was the Italian and European middleweight champion.

Harry Arroyo is an American former professional boxer who gained international recognition as the IBF lightweight champion from 1984 to 1985.

Tommy Bell was an African-American boxer. As a professional, he faced legendary fighters such as Jake LaMotta, Fritzie Zivic, and Kid Gavilán. Bell fought for the welterweight title against Sugar Ray Robinson in 1946.

George "Sonny" Horne was a professional boxer in the 1940s who faced off against opponents such as Rocky Graziano, Kid Gavilán, Pete Mead, and Artie Levine. An outstanding defensive boxer, Horne lost only 10 bouts and fought one draw in 121 professional fights. 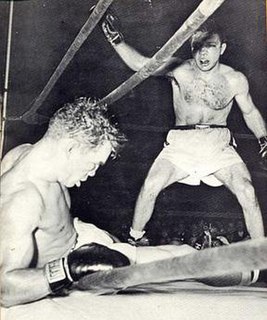 Laurent Dauthuille was a French boxer.

Lenny "Boom Boom" Mancini was an American professional boxer. He is the father of Ray Mancini, a former world champion boxer.