He was born in Budock Water, a village near Falmouth, [4] and on leaving school he found employment in Falmouth Docks as an electrician, later turning out for the Falmouth Docks football side. At the age of seventeen he played in the South Western Football League for Penzance, helping them win the Cornwall Senior Cup in 1973. He then moved to his home-town side Falmouth Town, before moving back to play for Penzance in 1974/75, winning a South Western League championship medal. In 1975, he returned to Falmouth Town. [5]

He returned to Exeter for a second spell, and joined Plymouth Argyle in 1983. [3] After 13 appearances with Plymouth he moved to Swansea City in March 1984. [8]

He then moved to Newport County, before a return for a third spell with Exeter. [3]

Kellow died on 20 February 2011, [9] [10] in Truro's Treliske Hospital of kidney failure after being found unconscious at his Budock Water home. He was 58 years old. [7] His funeral service was held at St Budock Parish Church on 28 February 2011, and his body was then cremated at Truro's Penmount Crematorium. A memorial stone in honour of Kellow stands close to the Trelowarren Arms pub in Budock Water. [11]

Falmouth is a town, civil parish and port on the River Fal on the south coast of Cornwall, England, United Kingdom. It has a total resident population of 21,797.

The Maritime Line is a railway line that runs in the valley of the River Fal from Truro, the county town, to Falmouth on the south coast of Cornwall, United Kingdom. 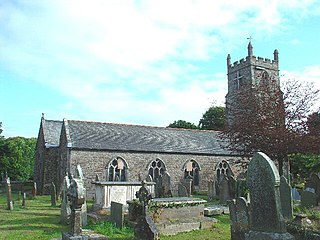 Budock Water is a village and former manor in the civil parish of Budock, Cornwall, England, United Kingdom. The village is situated two miles (3 km) west of Falmouth.

The Cornwall Railway was a 7 ft 1⁄4 in broad gauge railway from Plymouth in Devon to Falmouth in Cornwall, England, built in the second half of the nineteenth century. It was constantly beset with shortage of capital for the construction, and was eventually forced to sell its line to the dominant Great Western Railway.

Penryn railway station is on the Maritime Line between Truro and Falmouth Docks, and serves the town of Penryn, Cornwall as well as Penryn Campus. It is 309 miles 10 chains (497.49 km) measured from London Paddington. The services are operated by Great Western Railway.

Truro City Football Club is an English football club based in Truro, Cornwall. They currently play in the Southern League Premier South, at the seventh tier of the English football league system. They are the highest ranked club from Cornwall.

Falmouth Town Association Football Club is a football club based in Falmouth, Cornwall, United Kingdom. They are currently members of the South West Peninsula League Premier Division West and play at Bickland Park. The club were the first Cornish team to reach the first round proper of the FA Cup, which they have done on three occasions; 1962–63, 1967–68 and 1969–70.

The Cornwall Combination League is a football competition based in the western half of Cornwall, England, formed in 1959. The current league sponsors are drinks retailers LWC. 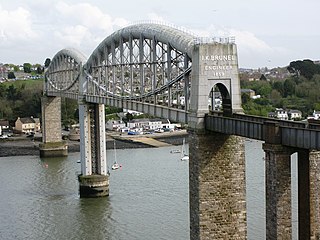 The Cornish Main Line is a railway line in Cornwall in the United Kingdom. It runs from Penzance to Plymouth, crossing from Cornwall into Devon over the famous Royal Albert Bridge at Saltash.

Susan Elizabeth Gay was a chronicler of Falmouth in a book published in 1903 entitled Old Falmouth.

The evolution of transport in Cornwall has been shaped by the county's strong maritime, mining and industrial traditions and much of the transport infrastructure reflects this heritage.

James Jago FRS, was an English physician. He was the second son of John Jago and was born 18 December 1815 at the barton of Kigilliack, Budock, near Falmouth, Cornwall, once a seat of the bishops of Exeter. Dr. Jago was a voluminous writer on various medical subjects, the most important of which were investigations upon certain physiological and pathological conditions of the eye, which his mathematical and medical knowledge especially fitted him to discuss. He was also interested in the history and progress of Cornish science and antiquities.

Martin John Rice is an English professional footballer who plays as a goalkeeper for Exmouth Town. He spent most of his early professional career at Exeter City and has since played for their rivals Torquay United and non-League side Truro City.

Isaac Cleveland Vassell is an English professional footballer who plays as a striker for Championship club Cardiff City. He previously played in the Football League for Plymouth Argyle, Luton Town and Birmingham City and in non-league football for Truro City, Bideford and Weymouth.

Steve Massey is an English football manager and former player who played as a striker, mainly for Stockport County and A.F.C. Bournemouth. He was manager of Southern League club Truro City until March 2014 and is currently manager of South West Peninsula League club Helston Athletic.

Kernow is a bus company operating services in Cornwall, England. It is part of First South West, a subsidiary of FirstGroup.