The Tony Knowles Coastal Trail is an 11-mile-long (18 km) trail along the coast of Anchorage, Alaska designated for non-motorized use. The trail runs from Second Avenue in downtown Anchorage and finishes in Kincaid Park. The trail is entirely paved, supports two-way traffic, and connects with the Chester Creek Trail. Point Woronzof Park borders the coastal trail to the east for about a mile, starting at about mile 5.0. In the summer the trail is used extensively by walkers, runners, rollerbladers, and cyclists. In the winter the trail is used primarily for cross country skiing and also skijoring. The trail is a portion of the annual Tour of Anchorage cross country ski marathon.

Big Lake is a census-designated place (CDP) in Matanuska-Susitna Borough, Alaska, United States. It is part of the Anchorage, Alaska Metropolitan Statistical Area. The population was 3,350 at the 2010 census, up from 2,635 in 2000. 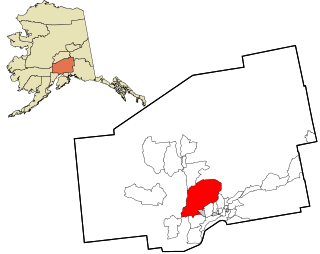 Willow is a census-designated place (CDP) in the Matanuska-Susitna Borough in the U.S. state of Alaska. It is part of the Anchorage, Alaska Metropolitan Statistical Area. At the 2010 census the population was 2,102, up from 1,658 in 2000.

Eklutna is a native village within the Municipality of Anchorage in the U.S. state of Alaska. The Tribal Council estimates the population at 70; many tribal members live in the surrounding communities.

The Fur Rendezvous Festival is an annual winter festival held in Anchorage, Alaska in late February. The self-styled "largest winter festival in North America", Fur Rendezvous is highly anticipated by many Anchorage-area residents as marking the beginning of the end of a long winter and the approach of spring. In 2012, Fur Rendezvous was selected as the number one winter carnival in the world by the National Geographic Traveler. 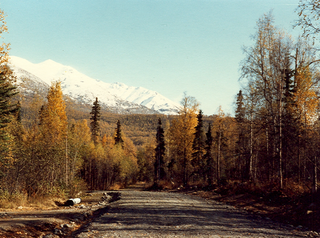 Chugiak is an unincorporated community in the Municipality of Anchorage in the U.S. state of Alaska, situated approximately 20 miles (32 km) northeast of downtown Anchorage.

Hatcher Pass is a mountain pass through the southwest part of the Talkeetna Mountains, Alaska. It is named after Robert Hatcher, a prospector and miner. The nearest cities are Palmer and Wasilla approximately 12 miles (19 km) to the south, and Willow approximately 26 mi (42 km) to the west. The communities are at an elevation of approximately 250 ft (76 m) in the Mat-Su valley. 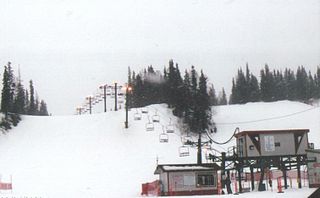 The Alaska Center for the Performing Arts is a performance venue in downtown Anchorage, Alaska. Opened in 1988, it hosts over 200,000 patrons annually, and consists of three theaters:

Anchorage is a unified home rule municipality in the U.S. state of Alaska, on the West Coast of the United States. With an estimated 288,000 residents in 2019, it is Alaska's most populous city and contains 39.37% of the state's population; among the 50 states, only New York has a higher percentage of residents who live in its most populous city. The Anchorage metropolitan area, which includes Anchorage and the neighboring Matanuska-Susitna Borough, had a population of 396,317 in 2019, accounting for more than half the state's population. At 1,706 square miles (4,420 km2) of land area, the city is the fourth-largest by area in the United States and larger than the smallest state, Rhode Island, which has 1,212 square miles (3,140 km2).

KLEF is a commercial classical music radio station in Anchorage, Alaska. It is owned by Alaska Integrated Media. Its studios are located on Business Park Boulevard in Anchorage, and its transmitter is located a mile away.

Kincaid Park is a 1,516.78-acre (6.1382 km2) municipal park in Anchorage, Alaska, located at 9401 W. Raspberry Road. The park is bounded on the south by Turnagain Arm, on the west by Knik Arm, and on the north by Ted Stevens Anchorage International Airport. Noted for Nordic skiing trails, in snowless months the park is frequented by runners, bikers, hikers, archers, dog-trainers, motocross users, disc golfers, soccer teams, and rollerskiers. Other winter activities include snowshoeing, sledding and biathlon. The park was created in 1978 and in 1978 expanded to include the location of a deactivated former Nike missile site. The park continues to evolve with changing demands of local residents. In 2009, a full 18 "hole" disc golf course that meanders through the wooded Mize loop area was completed. In 2010, several new soccer fields were completed and open for use in the area near the chalet. In 2012, a single artificial turf soccer field with stadium seating was completed just south of the chalet. Cook Inlet, Fire Island with its wind turbines, and Mount Susitna are visible from most hilltops in the park. On a clear day, Denali can also be seen from the park.

Point Woronzof Park is a municipal park in Anchorage, Alaska. The park is excellent for backcountry skiing or snowshoeing in the winter, and biking or running in the summer.

Bootleggers Cove is an area of Anchorage, Alaska, just west of Downtown Anchorage and north of the South Addition. Its exact boundaries are controversial. It is served by Inlet View Elementary School, Romig Junior High and West Anchorage High School. Its scenic features include Elderberry Park, the Oscar Anderson House, the Westchester Lagoon, and access to the Tony Knowles Coastal Trail and the Lainie Fleischer Bike Trail. It is located near the tidal flats of Cook Inlet. The Alaska Railroad passes between the residential zones of Bootleggers Cove and the tidal flats. Bootlegger's Cove was affected by the 1964 Alaska earthquake. It is currently represented in the Alaska State Legislature by Representative Les Gara and Senator Johnny Ellis.

The following is a list of sporting venues, events, and teams based in Alaska. 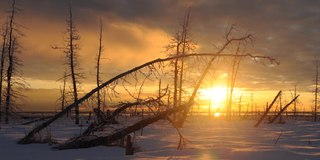 The Anchorage Coastal Wildlife Refuge is a wildlife refuge located in the Anchorage Municipality.

The Palmer Hayflats State Game Refuge is located in Alaska, south of Wasilla and north of Anchorage. It is composed of 28,800 acres of coastal marshy areas adjacent to Knik Arm that support populations of moose, muskrat, foxes, coyotes, eagles, and migratory waterfowl. The Knik River, the Matanuska River, Rabbit Slough, Wasilla Creek, Cottonwood Creek, and Spring Creek flow through it. 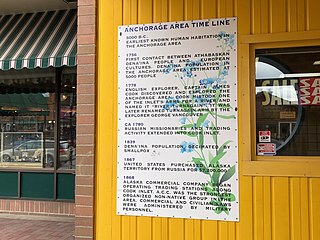 The following is a timeline of the history of the city of Anchorage, Alaska, United States.

The Far North Bicentennial Park is the largest park in Anchorage, in U.S. state of Alaska, and has over 1 million annual visitors. The park contains the Hilltop Ski Area, the Alaska Botanical Garden, over 100 miles of multi-use trails, and access to Chugach State Park.