Last updated March 07, 2021
Chinese actor
Not to be confused with Tony Leung Chiu-wai.
In this Chinese name, the family name is Leung .

Leung has been in the film industry for more than 30 years, starring in a variety of roles. His debut film was Burning of the Imperial Palace (1983), where he played the Xianfeng Emperor. He would later work with Chow Yun-fat in three films, Prison on Fire (1987), A Better Tomorrow 3 (1989), and God of Gamblers Returns (1994). He also appeared as Joyce Godenzi's husband in She Shoots Straight , Joyce's trademark film.

In 1991, Leung went to France to appear in Jean-Jacques Annaud's The Lover , based on Marguerite Duras's novel, as the older lover of a young teen schoolgirl, who was played by British actress Jane March.

Leung went on to star in the international horror feature film Double Vision with American actor David Morse. His ongoing career has seen him star in films such as The Myth (2005), Everlasting Regret (2005) and Election (2005).

Leung won his fourth Best Actor award for his performance in Cold War at the 32nd Hong Kong Film Awards. [2]

Tony Leung may refer to:

Liang is an East Asian surname of Chinese origin. Meaning "a beam", "a bridge", or "an elevation", or "a mast", the surname is often transliterated as Leung or Leong according to its Cantonese and Hakka pronunciation, Neo / Nio / Niu, or Liong (Foochow). To Indonesia, it is known as Liang or Nio. It is also common in Korea, where it is written Ryang (량) or Yang (양). In Vietnam, it's pronounced as Lương.

The Longest Nite is a 1998 Hong Kong crime thriller film directed by Patrick Yau and Johnnie To, starring Lau Ching-wan and Tony Leung Chiu-wai. The film was produced by To and Wai Ka-fai along with their production company, Milkyway Image. 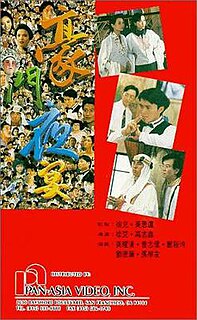 My Name Is Fame is a 2006 Hong Kong comedy-drama film starring Lau Ching-wan as a has-been actor and newcomer Huo Siyan as an aspiring actress and his apprentice.

The 2nd Asian Film Awards were given in a ceremony on 17 March 2008 at the Hong Kong Convention and Exhibition Centre as part of the Hong Kong International Film Festival. 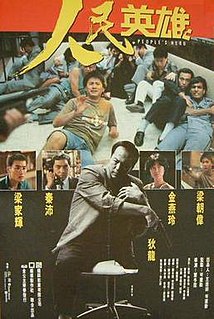 The Silent War is a 2012 Chinese-Hong Kong thriller film directed by Alan Mak and Felix Chong. Its is an adaptation of the popular novel Plot Against written by Mai Jia. 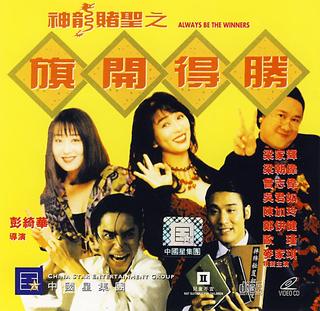 Always Be the Winners is a 1994 Hong Kong comedy film directed by Jacky Pang and starring Tony Leung Chiu-Wai, Tony Leung Ka-fai, Eric Tsang, Sandra Ng, Ekin Cheng and Charine Chan. The film was released during the Chinese New Year period of 1994 to celebrate the holidays.

The Yuppie Fantasia 3 is a 2017 Hong Kong comedy film written, directed by and starring Lawrence Cheng. The film is a sequel to the 1989 film, The Yuppie Fantasia, and the 1990 film, Brief Encounter in Shinjuku. The film was released on 26 January 2017 to celebrate the Chinese New Year, as well as marking the 30th anniversary of the original radio series of the same name created by and starred Cheng in 1986, in which the film franchise was based on.

Theory of Ambitions is an upcoming Hong Kong crime thriller film written and directed by Philip Yung and starring Tony Leung Chiu-wai and Aaron Kwok respectively as Lam Kong and Lui Lok, two notorious corrupt Hong Kong police officers during the 1960s. The film was set for release at the end of 2018, but has not yet seen a release.

Chasing the Dragon II: Wild Wild Bunch, previously known as Master of Ransom, is a 2019 Hong Kong crime action film directed by Wong Jing and Jason Kwan, starring Tony Leung, Louis Koo and Gordon Lam, with Simon Yam making a special appearance. The film is a sequel in-title-only to the 2017 film, Chasing the Dragon, and features a new storyline and new characters.

Once Upon a Time in Hong Kong is an upcoming Hong Kong action crime thriller film written and directed by Felix Chong, it Starring Andy Lau and Tony Leung. Set in the 1980s, the film is based the story of Carrian Group, a Hong Kong corporation which rose rapidly before collapsing shortly afterwards due to a corruption scandal.