Magan was born on 15 December 1910. [1] He was a son of farmer James Magan and his wife Elizabeth Foley, of Kilmore, Dunshaughlin, County Meath. [2]

Magan was interned in the Curragh during the Irish Emergency (during the Second World War). In March 1946, he was arrested along with a number of other IRA men in the Ardee Bar, Dublin. Jailed, he was released in December 1946 along with Micksie Conway. Both men resumed their attempts to reorganise the IRA.

A lifelong bachelor and County Meath farmer, Magan sold his farm and devoted all his time and money to the IRA. He was appointed IRA chief of staff by the IRA Army Executive at its convention in September 1948. The IRA had almost been destroyed in the 1940s and Magan immediately set out to reorganise the political and military wings of the Republican Movement, namely the IRA and Sinn Féin, along with Michael Traynor, Paddy McLogan, and Tomás Mac Curtain.

Magan was not a popular choice for the position and several members of his previous IRA Army Council were not impressed by him but did not oppose his nomination outright. Magan drew support chiefly from Dublin delegates, who felt that "the Army needed a steel core and that Magan could supply it".

Magan was a determined physical force traditionalist. According to J. Bowyer Bell, he "wanted to create a new Army, untarnished by the dissent and scandals of the previous decade", with "no shadow of a gangster gunman, no taint of communism, but a band of volunteers solely dedicated to reuniting Ireland by physical force". [3] Tim Pat Coogan describes him as "priest-like - who had given all his money, time and thought to the IRA, a deeply religious man of the old-guard school of Irish Catholicism [and] when he was again interned in the Curragh during the 1950s Border Campaign he organised a flourishing branch of the Legion of Mary".

At the 1950 Sinn Féin Ardfheis, Magan was elected honorary joint secretary of the party. Coogan recounts that Magan's Sinn Féin submitted key political and economic policies for review by friendly clergy, "to ensure that they contained nothing contrary to Catholic teaching". In May 1951, the IRA leadership established a Military Council to draft an overall plan for the Republican Movement as a whole. Its members were Magan (as Chief of Staff), Tomás Mac Curtáin (as chairman of the Army Council), Pádraig Mac Lógáin (as president of Sinn Féin and chairman of the IRA Army Executive), a former British army officer with World War II experience service who was an expert on guerrilla warfare, and one other person.

In 1953, Magan played a role in organising and carrying out the Felstead arms raid. Unlike Seán Mac Stiofáin, Cathal Goulding, and Manus Canning, later jailed for the raid, Magan evaded arrest and managed to return safely to Ireland.

Magan was chief of staff at the commencement of the IRA's Border Campaign, codenamed Operation Harvest, which began on 11 December 1956.

He resigned from the Republican Movement in 1962 in a dispute over the relationship between the IRA and Sinn Féin. [4]

Magan, who lived at 45 Lower Dodder Road in Rathfarnham, Dublin, subsequently worked as a taxi driver. He died on 4 July 1981 at Meath Hospital. [5] On 8 July 1981 he was buried in Mount Jerome Cemetery, Dublin. [6] A lifelong bachelor, he was survived by his sisters, nieces and nephews. 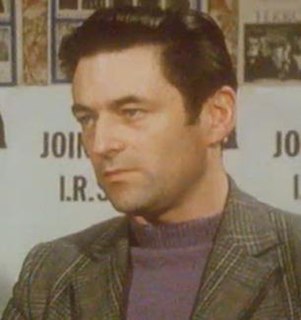 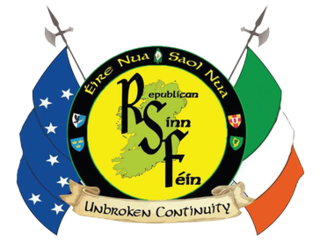 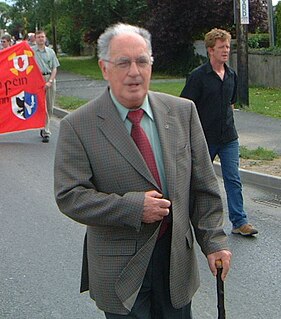 Several people are reported to have served as Chief of Staff of the Irish Republican Army in the organisations bearing that name. Due to the clandestine nature of these organisations, this list is not definitive.

The border campaign was a guerrilla warfare campaign carried out by the Irish Republican Army (IRA) against targets in Northern Ireland, with the aim of overthrowing British rule there and creating a united Ireland. 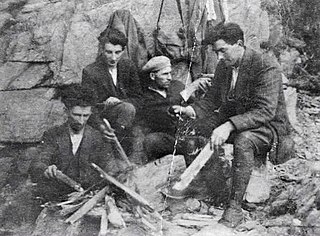 The original Irish Republican Army (IRA) fought a guerrilla war against British rule in Ireland in the Irish War of Independence between 1919 and 1921. Following the signing of the Anglo-Irish Treaty on 6 December 1921, the IRA in the 26 counties that were to become the Irish Free State split between supporters and opponents of the Treaty. The anti-Treatyites, sometimes referred to by Free State forces as Irregulars, continued to use the name Irish Republican Army (IRA) or in Irish Óglaigh na hÉireann, as did the organisation in Northern Ireland which originally supported the pro-Treaty side. Óglaigh na hÉireann was also adopted as the name of the pro-Treaty National Army, and remains the official legal title of the Irish Defence Forces. This article deals with the anti-Treaty IRA that fought against the Irish Free State in the Irish Civil War, and with its successors up to 1969, when the IRA split again. 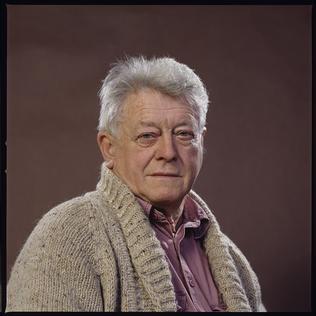 Cathal Goulding was Chief of Staff of the Irish Republican Army and the Official IRA.

Saor Uladh was a short-lived Irish republican paramilitary organisation in Northern Ireland in the 1950s.

Tomás Ó Dubhghaill was President of Sinn Féin from 1952 to 1954 and a Sinn Féin vice-president until his death.

Seán McCool was a prominent Irish Republican and a former chief of staff of the Irish Republican Army. Imprisoned on numerous occasions, both North and South of the border, he embarked on a number of hunger strikes. He stood as a candidate for Clann na Poblachta before leaving the party as a result of their decision to go into government with Fine Gael.

Éamonn MacThomáis was an author, broadcaster, historian, Irish Republican, advocate of the Irish Language and lecturer. He presented his own series on Dublin on RTÉ during the 1970s and was well known for guided tours and lectures of his beloved Dublin. He is buried in Dublin's Glasnevin Cemetery, next to Frank Ryan.

Seán Mac Stíofáin, born John Stephenson, was an English-born chief of staff of the Provisional IRA, a position he held between 1969 and 1972.

Proinsias Mac Airt was an Irish republican activist and long-serving member of the Irish Republican Army.