Tony McRae may refer to:

Thomas Chipman McRae was an American attorney and politician from Arkansas. He served as a Democratic member of the United States House of Representatives and the 26th Governor of Arkansas, from 1921 to 1925.

McRae is a surname. Notable people with the surname include:

Raffaella Julia Theresa Abruzzo, professionally known as Rae Allen, is an American actress and director of stage, film and television actress, and singer. Her early roles were in Broadway theatre productions, starting from 1948 she moved to television and film roles in the early 1960s

Donald McRae may refer to:

John Rae may refer to:

Shane McRae is an American actor. He appeared in Hack, guest starred on One Life to Live, Law & Order: Criminal Intent, and Cold Case and had a recurring role in Chicago Fire.

Duncan McRae may refer to:

MacDonnell, Macdonnell, or McDonnell is a surname of Scottish and Irish origin. It is an anglicized form of the Gaelic name "Mac Domhnaill", which means son of Donald. The name Donald or Domhnall is ultimately derived from the Proto-Celtic word elements dubno ("world") and val ("rule").The name is a variant other Clan Donald surnames such as Macdonald, McConnell and Donaldson. McDonnells are found in both Irish and Scottish nobility, and have held an important role in the history of both countries.

McManus is an Irish surname. It is derived from the Gaelic Mac Mághnais which means 'Son of Magnus.' The given name Magnus comes from the Latin word meaning "great" and it became popular in Ireland during the time of the Vikings. Notable people with the surname include:

Charles Edward McRae is the current CEO at Columbus Radiology Corp and a former American football offensive tackle in the National Football League. He spent five seasons with the Tampa Bay Buccaneers, starting 38 at right tackle and left guard before finishing his career with the Oakland Raiders. 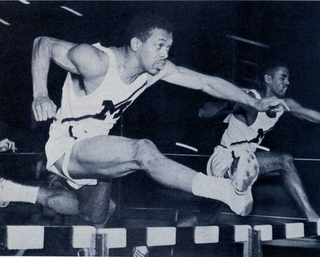 Benjamin Prince "Bennie" McRae was an American football player. A native of Newport News, Virginia, McRae played college football as a halfback at the University of Michigan from 1959 to 1961 and professional football, principally as a cornerback, for 10 seasons in the National Football League (NFL) with the Chicago Bears (1962–1970) and New York Giants (1971).

Events from the year 1985 in Scotland.

Tony McRae is an American football cornerback for the Cincinnati Bengals of the National Football League (NFL). He played college football at North Carolina A&T, and signed with the Oakland Raiders as an undrafted free agent in 2016.

Rae is a surname and given name.

MacAlpine, McAlpine, MacAlpin or McAlpin is a Scottish surname. It may refer to: