Anton Henry "Tony" Momsen, Jr. (January 29, 1928 – March 6, 1994) was an American football center in the National Football League for the Pittsburgh Steelers and the Washington Redskins. He played college football at the University of Michigan in 1945, 1949 and 1950, and is most remembered for scoring the winning touchdown in the 1950 Snow Bowl game between Michigan and Ohio State.

Momsen was born in Toledo, Ohio in 1928. He was the son of Rose and Anton Momsen, Sr. [1] He attended Toledo's Libbey High School where he was a star athlete in football, basketball and track. [1] In 1944, he was selected as the first-team center on the Associated Press All-Ohio football team. In announcing the selection, the AP quoted an Ohio coach who said, "Momsen was one of the finest linebackers I have ever seen. He diagnoses plays rapidly, is extremely fast and a terrific tackler." [2] He was also an all-city and all-state basketball player. [3]

Momsen enrolled at the University of Michigan in 1945. In November 1945, when Michigan's starting center, Harold Watts, was transferred for additional Navy training, Momsen became a starter at center for the 1945 football team. [4] [5] [6]

After the 1945 season, Momsen withdrew from school. He entered the military. [7] He also married and had two children. [8] In 1947, he played football for Bob Snyder's Grills in the City Federation football league. [9]

Momsen is most remembered for his role in the famed 1950 Snow Bowl game against Ohio State. The game matched Momsen against his younger brother, Robert "Buckeye Bob" Momsen, who was a starter for Ohio State. [8] The game was played in a blizzard, with weather conditions so inclement that Michigan punted on first down for its first two plays from scrimmage, after concluding that the best strategy was to keep the slick ball on the other side of the field and in the hands of Ohio State. [12] The Buckeyes scored when Vic Janowicz kicked a field goal after Robert Momsen recovered a blocked Wolverine kick. With 47 seconds remaining in the first half, Tony Momsen blocked a Janowicz punt and fell on the ball in the end zone for a touchdown. The Wolverines won by a final score of 9-3. Momsen, who scored the game's only touchdown was remembered as "the hero of a brilliant forward wall." [13] Bob Momsen later recalled, "Two brothers got more publicity for playing in a terrible football game than anyone ever deserves." [14]

The win over Ohio State sent Michigan to the 1951 Rose Bowl against California. In the lead-up to the Rose Bowl, the Los Angeles Times gave credit to linement[ check spelling ] Roger Zatkoff and Momsen for leading Michigan's defense: "Zatkoff and Tony Momsen, the other backer-upper in Michigan's usual six-man line defense, are the main reasons why Michigan topped the Big Ten in throttling opponents." [15]

Momsen was selected by the Los Angeles Rams in the fifth round of the 1951 NFL Draft. He signed with the Rams in July 1951, [16] but he was traded to the Pittsburgh Steelers before the 1951 NFL season started. Momsen appeared in 11 games, all as a backup for the 1951 Steelers. In August 1952, Momsen was traded to the Washington Redskins. [17] Momsen appeared in two games for the 1952 Redskins before being released on October 7, 1952. [18]

In 1953, Momsen played for the Calgary Stampeders of the Western Interprovincial Football League. In 1954, Momsen was in the Toronto Argonauts organization. He quit the Argonauts in August 1954 after being told he would play for the Argonauts' farm team. [19]

After retiring from football, Momsen worked as a cement contractor and built customized golf clubs. He lived in Sunrise, Florida for the last 25 years of his life. [1] In March 1994, he died at Riverside Methodist Hospital in Columbus, Ohio, due to complications following hip replacement surgery. [1] Three weeks after Momsen's death, Libbey High School announced that Momsen would be included among the initial inductess into the Libbey High School Hall of Fame. [3]

The Snow Bowl was a college football game played on November 25, 1950 between the teams of the University of Michigan and The Ohio State University. The Michigan Wolverines defeated the Ohio State Buckeyes, 9–3, earning the Big Ten Conference championship and a berth in the 1951 Rose Bowl. The game was one of the most noted in the storied history of the Michigan–Ohio State football rivalry. 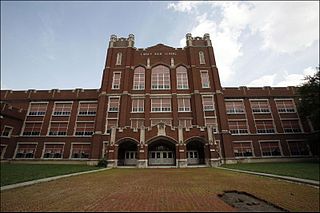 Edward Drummond Libbey High School was a public high school building located on the south side of Toledo, Ohio which held classes from 1923 until 2010. It is part of Toledo Public Schools and contained the Smart Academy and Humanities Academy. Libbey was named after Edward Drummond Libbey, the founder of the Toledo Art Museum and Libbey Glass. David L. Stine was the building's architect. 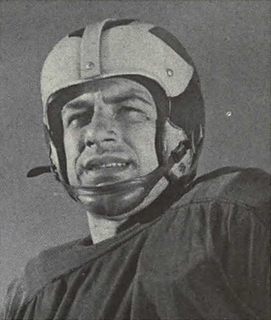 Roger Zatkoff is a former American football player and businessman. 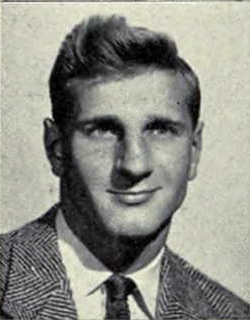 Robert Allen "Al" Wahl, nicknamed "Brick" Wahl, is a former football player who was a two-time All-American for the University of Michigan Wolverines in 1949 and 1950. Wahl is also a former U.S. Army heavyweight boxing champion who went on to become the president of a Fortune 500 company, Valmont Industries.

The 1950 Michigan Wolverines football team was an American football team that represented the University of Michigan in the 1950 Big Nine Conference football season. Coached by Bennie Oosterbaan, the Wolverines won the Big Ten Conference championship with a record of 6–3–1 and defeated the California Bears in the 1951 Rose Bowl, 14–6. The team had two All-Big 10 backs in Don Dufek and Chuck Ortmann and All-American tackle R. Allen "Brick" Wahl. Despite losing three times and tying once, Michigan was ranked #9 in the AP Poll and #6 in the UPI Poll at season's end. The Wolverines played a regular season game at Yankee Stadium against Army on October 14, 1950, losing 27–6. 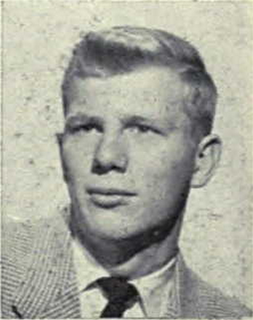 Charles H. Ortmann was an American football player who played for the University of Michigan Wolverines from 1948 to 1950 and in the National Football League for the Pittsburgh Steelers in 1951 and the Dallas Texans in 1952.

Bill Putich was an American football player who played quarterback and halfback for the University of Michigan Wolverines football teams from 1949 to 1951.

Leo Robert "Bugsy" Koceski, Jr., also known as the "Canonsburg Comet," is a former American football halfback. He played for Michigan's undefeated national championship team in 1948 and the 1950 Big Ten championship team that defeated the California in the 1951 Rose Bowl.

Anthonios "Tony" Branoff is a former American football player. He played at the halfback position for the University of Michigan from 1952 to 1955. He was chosen as the Most Valuable Player on the 1953 Michigan Wolverines football team. He was the first sophomore to win the award. He also led the Wolverines in rushing in both 1953 and 1955.

Donald Williams "Jiggs" Peterson was an American football player. He played college football for the University of Michigan from 1948 to 1951 and was selected as the Most Valuable Player of the 1951 Michigan Wolverines football team 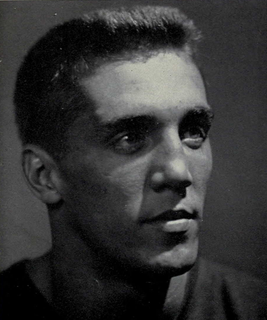 The History of Michigan Wolverines football in the Crisler years covers the history of the University of Michigan Wolverines football program during the period from the hiring of Fritz Crisler as head coach in 1938 through his retirement as head coach after winning the 1948 Rose Bowl. Michigan was a member of the Big Ten Conference during the Crisler years and played its home games at Michigan Stadium. 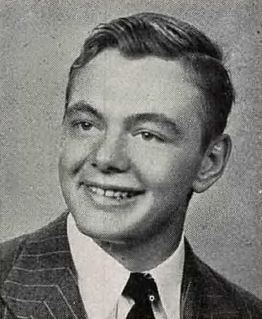 Robert Edward "Bob" Momsen was an American football player. He was a first-team All-American at Ohio State in 1950.