Anthony John Mottram (8 June 1920 – 6 October 2016) was a British tennis player of the 1940s and 1950s. [2] Mottram reached the quarterfinal of the 1948 Wimbledon Championships in which he lost to Gardnar Mulloy. [1] In the doubles event he reached the final of the 1947 Wimbledon Championships with Bill Sidwell in which they were defeated by the first-seeded team of Jack Kramer and Bob Falkenburg. [1] He reached the French Open's fourth round in both 1947 and 1948, and the third round of the 1951 US Open. [3]

In 1949 he married Joy Gannon who was also a tennis player, as were their children Buster Mottram and Linda Mottram. [5] [6] In 1957 he published a book with his wife titled Modern Lawn Tennis. [7] 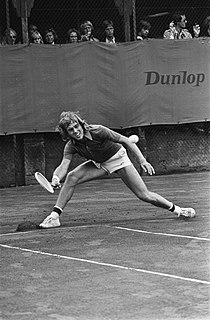 Gardnar Putnam "Gar" Mulloy was a U.S. No. 1 tennis player primarily known for playing in doubles matches with partner Billy Talbert. He was born in Washington, D.C. and turned 100 in November 2013. During his career he won five Grand Slam doubles tournaments and was a member of the winning Davis Cup team on three occasions.

Thomas P. Brown Jr. was one of the top amateur tennis players in the world in the 1940s and a consistent winner in veterans' and seniors' competitions. He was the son of Thomas P. Brown, a newspaper correspondent, later public relations director for a railroad, and Hilda Jane Fisher, who became a schoolteacher when Tom was a boy. Though born in Washington, D.C., Tom was considered a San Franciscan all his life, having been brought west by his parents at the age of two.

The 1972 Wimbledon Championships was a tennis tournament that took place on the outdoor grass courts at the All England Lawn Tennis and Croquet Club in Wimbledon, London, United Kingdom. The tournament was scheduled to be held from Monday 26 June until Saturday 8 July 1972 but rain on the final Saturday meant that the men's singles, women's doubles and mixed doubles finals were played on Sunday 9 July. It was the first time in the tournament's history that finals were played on a Sunday. It was the 86th staging of the Wimbledon Championships, and the third Grand Slam tennis event of 1972.

The 1973 Wimbledon Championships was a tennis tournament that took place on the outdoor grass courts at the All England Lawn Tennis and Croquet Club in Wimbledon, London, United Kingdom. The tournament was scheduled to be held from Monday 25 June until Saturday 7 July 1973 but rain on the final Friday meant that the women's singles final was postponed until Saturday and the mixed doubles final was rescheduled to Sunday 8 July. It was the 87th staging of the Wimbledon Championships, and the third Grand Slam tennis event of 1973. Jan Kodeš and Billie Jean King won the singles titles. King became the first player in the open era to claim the triple crown, the second time in her career she won all three titles open to women players. Her three victories necessitated playing six matches on the final weekend of the tournament: The singles final, the doubles semi-final and final and the mixed doubles quarter-final, semi-final and final, which was played on the extended Sunday schedule.

The 1947 Wimbledon Championships took place on the outdoor grass courts at the All England Lawn Tennis and Croquet Club in Wimbledon, London, United Kingdom. The tournament was held from Monday 23 June until Saturday 5 July 1947. It was the 61st staging of the Wimbledon Championships. In 1947, as in 1946, Wimbledon was held before the French Championships and was thus the second Grand Slam tennis event of the year. Jack Kramer and Margaret Osborne won the singles titles.

Sydney Howard Smith was a British tennis and badminton player. 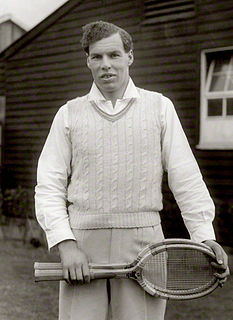 John Edward Barrett, is a former tennis player, television commentator and author. He was born in Mill Hill, North West London, the son of Alfred Edward Barrett, a leaf tobacco merchant, and Margaret Helen Barrett. He had one sister, Irene Margaret Leppington (1925–2009), a research chemist. His father had the rare distinction of having played both for Leicester Tigers RFC as a wing three-quarter and for Leicester Fosse FC as a wing half.

Geoffrey Edmund Brown is a former Australian male tennis player, born in Murrurundi, New South Wales, Australia. He attended Parramatta Marist High School in 1938-9 before joining the R.A.A.F as a gunner. He was demobilised at the end of the war and returned to playing tennis.

Ivo Ferdinand Rinkel was a Dutch tennis and field hockey player who was active in the 1940s and 50s. 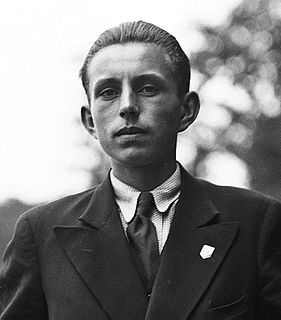 Tom Brown and Jack Kramer were the defending champions, but decided not to play together. Brown partnered with Budge Patty but lost in the first round to Tony Mottram and Bill Sidwell. Kramer partnered with Bob Falkenburg, and they defeated Mottram and Sidwell in the final, 8–6, 6–3, 6–3 to win the Gentlemen' Doubles tennis title at the 1947 Wimbledon Championship.

Giovanni Cucelli (1916–1977) was an Italian tennis player. He played Davis Cup for Italy and formed a great doubles partnership with Marcello Del Bello. Because of World War 2, Cucelli was 30 by the time he made his Grand Slam debut at Wimbledon in 1947, where he lost in the third round to Jack Kramer. At Roland Garros Cucelli beat veteran Jack Crawford and Robert Abdesselam before losing to defending champion Marcel Bernard in five sets in the quarter finals. At Roland Garros in 1948, Cucelli beat a young Frank Sedgman before losing to Frank Parker in the quarter finals. At Wimbledon Cucelli beat Jaroslav Drobny before losing to Tony Mottram in round three. At Roland Garros in 1949, Cucelli reached his third consecutive quarter final, where he lost to Budge Patty. At Wimbledon he beat Mottram before losing to Eric Sturgess in the last 16. At 1949 U. S. championships, Cucelli lost in round two to Sam Match. Cucelli lost in the last 16 of Roland Garros in 1950 to Patty. After early exits at the French and Wimbledon in 1951, Cucelli reached the last 16 at Roland Garros in 1952, where he lost to Ken McGregor. He lost early at Wimbledon to Mottram. Cucelli lost his first match at Roland Garros in 1953 to Rex Hartwig. In 1955 Cucelli turned professional. Cucelli won a lot of tournaments during his career: Italian Riviera championships and Alassio in 1939, Napoli and Barcelona Christmas tournament in 1941, St. Moritz, French-Switzerland championships and Milan international in 1946, Swiss championships, Villars, Montana-Vermala, Viareggio and Rapallo in 1947, Milan international, Napoli, Rapallo, Montecatini and Barcelona Christmas tournament in 1948, San Remo in 1949, Lugano, Istanbul, Venice and Lugano Lido tournament in 1950, San Pellegrino and Viareggio in 1951 and Cava De Tirreni in 1952. He was runner up at Monte Carlo in 1948 to Jozsef Asboth and 1949 to Parker and runner up at Rome in 1951.

Joy Mottram, is a retired female tennis player from England who was active in the late 1940s and the 1950s.