Tony Naden is a British lexicographer who specializes on Western Oti-Volta subgroup of Gur languages. [1] He has compiled dictionaries in the following languages: Dagbanli, Mampelle, Mõõré, Nabt, Talene, KaMara and Yarsi. [2]

Functional linguistics is an approach to the study of language characterized by taking systematically into account the speaker's and the hearer's side, and the communicative needs of the speaker and of the given language community. It is contrasted with linguistic formalism, which instead attempts to isolate syntax and consider it autonomously from meaning. Both functionalism and formalism spawned from the 1920s-1930s from Ferdinand de Saussure's systematic structuralist approach to language (1916).

An interjection is a word or expression that occurs as an utterance on its own and expresses a spontaneous feeling or reaction. It is a diverse category, encompassing many different parts of speech, such as exclamations (ouch!, wow!), curses (damn!), greetings, response particles, hesitation markers and other words. Due to its diverse nature, the category of interjections partly overlaps with a few other categories like profanities, discourse markers and fillers. The use and linguistic discussion of interjections can be traced historically through the Greek and Latin Modistae over many centuries.

Dagbani, also known as Dagbanli and Dagbanle, is a Gur language spoken in Ghana. Its native speakers are estimated around 3,160,000. It is a compulsory subject in primary and junior high school in the Dagbon Kingdom, which covers the eastern part of the region. Dagbani is the most widely spoken language in northern Ghana, especially among acephalous tribes overseen by the King of Dagbon, the Ya-Na.

Mirativity, initially proposed by Scott DeLancey, is a grammatical category in a language, independent of evidentiality, that encodes the speaker's surprise or the unpreparedness of their mind. Grammatical elements that encode the semantic category of mirativity are called miratives.

The Ngarinyin language, also known as Ungarinjin and Eastern Worrorran, is a moribund Australian Aboriginal language of the Kimberley region of Western Australia spoken by the Ngarinyin people.

Dalabon is a Gunwinyguan language of Arnhem Land, Australia. It is a severely endangered language, with perhaps as few as three fluent speakers remaining as of 2018. Dalabon is also known as Dangbon, Ngalkbun, and Buwan.

Keith Allan, FAHA is an Australian linguist and Emeritus Professor at Monash University. 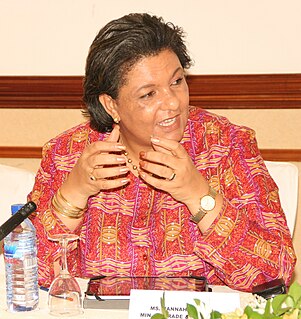 The status of women in Ghana and their roles in Ghanaian society has changed over the past few decades. There has been a slow increase in the political participation of Ghanaian women throughout history. Women are given equal rights under the Constitution of Ghana, yet disparities in education, employment, and health for women remain prevalent. Additionally, women have much less access to resources than men in Ghana do. Ghanaian women in rural and urban areas face slightly different challenges. Throughout Ghana, female-headed households are increasing.

The principle of evidential existentiality in philosophy is a principle that explains and gives value to the existence of entities. The principle states that the reality of an entity's existence gives greater value to prove its existence than would be given through any outward studies. The principle has become a backbone of the God argument, stating that because God is a self-evident entity, His existence can only be shared by humans, thus proof of God is unnecessary and moot. It appears that the existence is primarily evident to the self only. The God or Supreme self is perceivable to the self. So evidentially self perception is followed by God perception and so on.

Ellen Contini-Morava is an anthropological linguist, interested in the meanings of linguistic forms, discourse analysis, functional linguistics and (noun) classification; in particular, in the relationship between lexicon and grammar. She specializes in Bantu languages in general, and Swahili in particular.

Lexicogrammar is a term directly related to systemic functional linguistics. Systemic functional linguistics is a specific approach to adding as much detail as possible when describing lexicogrammar. It was coined by Michael Halliday, the father of systemic functional linguistics, to describe the continuity between grammar and lexis. For many linguists, these phenomena are discrete. But Halliday brings them together with this term. As with other dimensions of Halliday's theory, he describes the relation of grammar to lexis as one of a 'cline', and therefore, one of 'delicacy'. In 1961, he wrote 'The grammarian's dream is...to turn the whole of linguistic form into grammar, hoping to show that lexis can be defined as "most delicate grammar". In 1987, Ruqaiya Hasan wrote an article titled 'The grammarian's dream: lexis as delicate grammar', in which she laid out a methodology for mapping lexis in Halliday's terms.

Mamprusi is a Gur language spoken in northern Ghana by the Mamprusi people. It is partially mutually intelligible with Dagbani. The Mamprusi language is spoken in a broad belt across the northern parts of the Northern Region of Ghana, stretching west to east from Yizeesi to Nakpanduri and centred on the towns of Gambaga/Nalerigu and Walewale. In Mamprusi, one speaker is a Ŋmampuriga, many (plural) are Ŋmampurisi and the land of the Mamprusi is Ŋmampurigu.

Georgia M. Green is an American linguist and academic. She is an emeritus professor at the University of Illinois at Urbana-Champaign. Her research has focused on pragmatics, speaker intention, word order and meaning. She has been an advisory editor for several linguistics journals or publishers and she serves on the usage committee for the American Heritage Dictionary.

An interruption is a speech event when one person breaks in to interject while another person is talking. Linguists, social psychologists, anthropologists, and sociologists are among the social scientists who have studied and identified patterns of interruption that may differ by gender, social status, race/ethnicity, culture, and political orientation.

Mary Esther Kropp Dakubu was an American linguist based in Ghana, known for her work on Ghanaian languages. She was professor emerita at the Institute of African Studies at the University of Ghana, where she had been affiliated since 1964.

Felix Ameka is a linguist working on the intersection of grammar, meaning and culture. His empirical specialisation is on West-African languages. He is currently professor of Ethnolinguistic Diversity and Vitality at Leiden University and teaches in the departments of Linguistics, African Languages and cultures, and African Studies. In recognition of his pioneering work on cross-cultural semantics and his long-standing research ties with Australian universities, he was elected as a Corresponding Fellow to the Australian Academy of Humanities in 2019.

Alan Stewart Duthie was a Scottish linguist and academic who settled and worked in Ghana all his adult life. He was a pioneer in linguistics at the University of Ghana, Legon for 49 years. 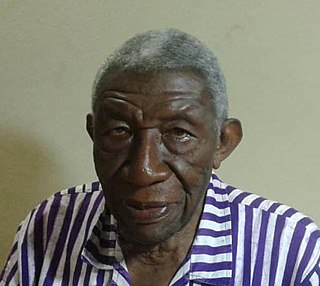