Last updated December 23, 2020
English film director and author
This article is about the film, theatre and opera director. For other people, see Tony Palmer (disambiguation).

Among over 40 international prizes for his work are 12 Gold Medals from the New York Film Festival as well as numerous BAFTAs and Emmy Awards. Palmer has won the Prix Italia twice, [3] for A Time There Was in 1980 and At the Haunted End of the Day in 1981. He is a Fellow of the Royal Geographical Society, and an honorary citizen of both New Orleans and Athens.

Tony Palmer was born in London. He was educated at Lowestoft Grammar School, Cambridgeshire High School for Boys and Trinity Hall, Cambridge, where he read History and Moral Sciences. [4] [5] [6] From Cambridge (where he was also President of the Marlowe Society), he joined the BBC. Following an apprenticeship with Ken Russell and Jonathan Miller, Palmer's first major film, Benjamin Britten & his Festival, became the first BBC film to be networked in the United States. With his second film, All My Loving, an examination of rock and roll and politics in the late 1960s, he achieved considerable notoriety.

In 1989, he was awarded a retrospective of his work at the National Film Theatre in London, the first maker of arts films to be so honoured.

In addition to films, Tony Palmer has also directed in the theatre and in the opera house. After a debut at the Zurich Opera House with Peter Grimes ("the high point of the season", Neue Zürcher Zeitung), he had a double triumph in Karlsruhe, War and Peace , and again in Zurich with Berlioz's masterpiece, The Trojans ("marvellous" – London Daily Express). In Saint Petersburg, he directed the Russian premiere of Parsifal ("world class" – The Times), conducted by Valery Gergiev, with Plácido Domingo. He has also directed in Hamburg, Munich, Augsburg, Savonlinna, Berlin and Helsinki and recently became the first Western director ever to work at the Bolshoi in Moscow.

Parsifal won Best Theatre Production ('Casta Diva') in Moscow, 1997, as well as a 'Golden Mask'. On the West End stage he has directed the world premiere of John Osborne's Look Back in Anger Part Two, Déjà Vu. Mr Palmer also presented the BBC Radio 3 Arts magazine 'Night Waves', for which he won a Sony Award for best arts programme.

Tony Palmer is also well known for his rock music documentaries, several of them the among the first of the genre and covering everyone from the Beatles to Cream. "All My Loving" (1968) is Palmer's groundbreaking BBC series on pop music (which John Lennon personally requested he make) featuring Eric Clapton, Eric Burdon, Jimi Hendrix and others against the backdrop of the Vietnam War and other explosive political events rocking the 1960s. Palmer went on to make "200 Motels," a documentary about America avant-garde rock musician Frank Zappa. It's considered a rock classic but in a 2017 interview with Toronto arts reporter and critic Deirdre Kelly, Palmer called it one of worst films he ever did.

Tony Palmer has published several books, and has written for The New York Times , The Times , Punch , Life magazine etc. From 1967 to 1974 he was a regular music critic for The Observer . From 1969 to 1974 he had a weekly column in The Spectator entitled 'Notes from the Underground'. 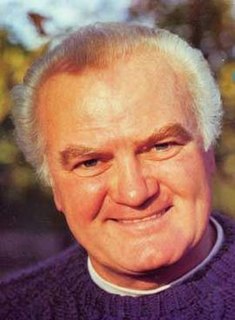 Sir Reginald Goodall was an English conductor and singing coach noted for his performances of the operas of Richard Wagner and for conducting the premieres of several operas by Benjamin Britten.

René Kollo is a German operatic tenor, especially known for his Wagnerian parts. In addition to Heldentenor roles, he performed in a wide variety of operas and operettas during his career. Kollo also made several operatic recordings. 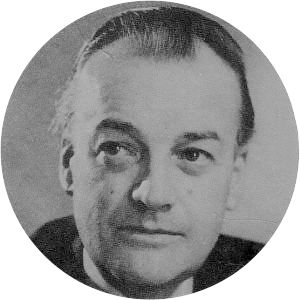 John Royds Culshaw OBE was a pioneering English classical record producer for Decca Records. He recorded a wide range of music, but is best known for masterminding the first studio recording of Wagner's Der Ring des Nibelungen, begun in 1958.

The Ravello Festival is also popularly known as the "Wagner Festival" and is an annual summer festival of music and the arts held in the town of Ravello on the Amalfi coast in the Campania region of Italy. The festival has been held yearly since 1953 when the town fathers decided to use the historical fact of the visit to Ravello in 1880 by German composer Richard Wagner as a way to promote tourism and bolster the economy of the area in the difficult years following the Second World War. The composer had been so taken with the beauty of the Villa Rufolo in Ravello that he is said to have proclaimed, in reference to a character in his own opera Parsifal, "Here is the enchanted garden of Klingsor."

(Albert) Meredith Davies CBE was a British conductor, renowned for his advocacy of English music by composers such as Benjamin Britten, Frederick Delius and Ralph Vaughan Williams.

Christopher Ventris, born 1965, in London, is a British tenor. He is particularly known for his role as Parsifal which he performed at the Bayreuth Festival during the 2008, 2009, and 2010 Festival seasons.

Richard Van Allan CBE was a versatile British operatic bass singer who had a lengthy career. 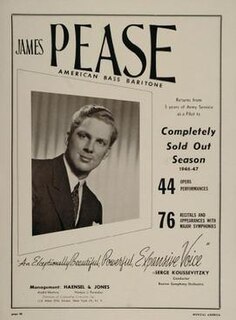 James Pease was an American bass-baritone, notable for his Wagnerian roles. He was also a distinguished Balstrode in Benjamin Britten’s Peter Grimes, a role which he was the first to perform in the US in 1946, and later recorded under the composer’s direction in 1958.

Paul Frey is a Canadian heldentenor, internationally known for his performances in the operas of Richard Wagner. He has performed many times at the Bayreuth Festival and the Metropolitan Opera. He can be heard on CD and seen on DVD.

Elisabeth Glauser is a Swiss operatic mezzo-soprano and an academic teacher of voice. She was engaged at opera houses in Germany and has appeared at international festivals including the Bayreuth Festival and the Glyndebourne Festival. She has focused on roles by Richard Strauss and Richard Wagner, and has created roles in contemporary opera, such as Babette in Henze's Die englische Katze. 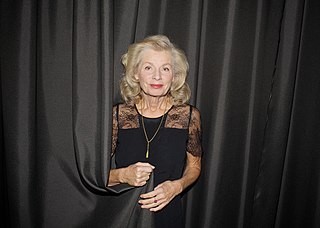