He only played one game in the NHL and that was with the Chicago Black Hawks. In that one game he scored no goals, earned no assists for no points. He also had no penalty minutes.

Poeta played for the World Champion Belleville McFarlands in 1959. 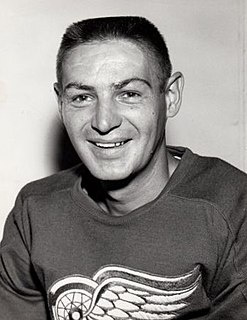 Terrance Gordon Sawchuk was a Canadian professional ice hockey goaltender who played 21 seasons in the National Hockey League (NHL) for the Detroit Red Wings, Boston Bruins, Toronto Maple Leafs, Los Angeles Kings and the New York Rangers. He won the Calder Trophy, earned the Vezina Trophy in four different seasons, was a four-time Stanley Cup champion, and was elected to the Hockey Hall of Fame the year after his final season, one of only ten players ever for whom the three year waiting period was waived. 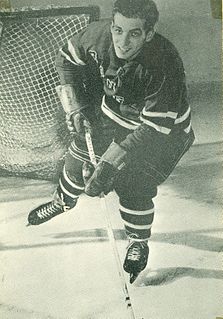 Joseph Wilfred Camille "The Eel" Henry was a professional Canadian ice hockey left winger who played for the New York Rangers, the Chicago Black Hawks and the St. Louis Blues in the National Hockey League. 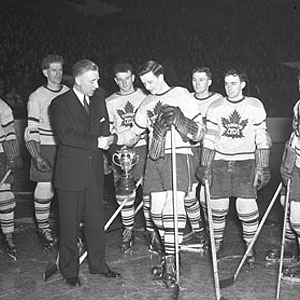 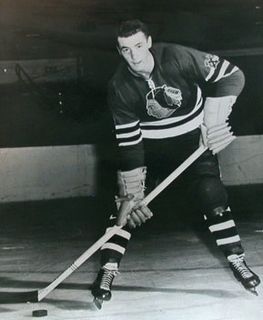 Edward Charles John "Eddie" Litzenberger was a Canadian ice hockey right winger from Neudorf, Saskatchewan. Litzenberger was "donated" to the Chicago Black Hawks by the Montreal Canadiens in his first year in the National Hockey League (NHL). At the time the Black Hawks were struggling to survive as a franchise, and the league governors decided to help the team remain viable. 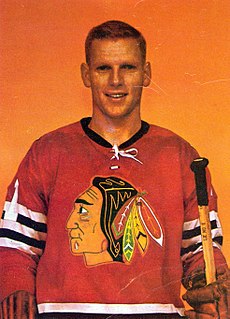 The Galt Black Hawks were a junior ice hockey team based in Galt, Ontario, now a part of the city of Cambridge. They played in the Ontario Hockey Association from 1949 to 1955 and were operated as an affiliate of the Chicago Black Hawks. Their home arena was the Galt Arena Gardens.

Hillary Gilbert "Minnie" Menard is a Canadian retired professional ice hockey left winger who played in one National Hockey League game for the Chicago Black Hawks during the 1953–54 NHL season. Hillary is the brother of Howie Menard. Leaving home at the age of fifteen, Minnie crafted one of the great stories in Canadian and USA hockey's Golden Age. At 5' 10" and weighing 178 lbs, his professional hockey career spanned fourteen years across six different leagues. He was a member of the Belleville McFarland's 1958-1959 Canadian Senior "A" league World Champion team winning the World Title in Prague, Czechoslovakia. In the 1957-1958 season Minnie hit the "50" goals scored milestone, leading his team to the coveted Allan cup. Hillary Menard also accumulated a team leading 134 penalty minutes in the same 1957-58 season. Minnie's playing career ended in 1966 with a last turn with the Des Moines Oak Leafs of the IHL where he served as player-coach for his final two-seasons. 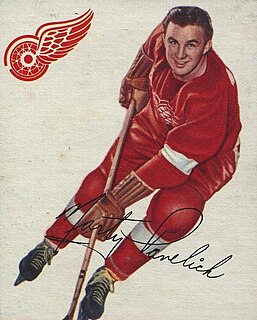 Martin Nicholas Pavelich is a Canadian former ice hockey left winger. He played ten seasons for the Detroit Red Wings of the National Hockey League from 1947 until 1957. Pavelich is the last surviving member of the Red Wings 1950 Stanley Cup team.

Jerome Gerald "Topper" Toppazzini was a Canadian ice hockey forward who played twelve seasons in the National Hockey League, most notably for the Boston Bruins. A skilled defensive specialist and penalty killer, he set the then-NHL record for shorthanded goals in a season in 1958 with seven.

Aloysius Martin "Tod" Sloan was a Canadian professional ice hockey player. He played in the National Hockey League (NHL) for the Toronto Maple Leafs and Chicago Black Hawks. He was a member of three Stanley Cup championship teams: 1949 and 1951 in Toronto, and 1961 in Chicago.

Hector Joseph Lalande was a Canadian professional ice hockey centre. He played in 151 National Hockey League (NHL) games, all but twelve with the Chicago Black Hawks. His most productive years were in the minors with the Clinton Comets where he had back-to-back 100-point seasons.

The 1957–58 Chicago Black Hawks season was the team's 32nd season in the NHL, and the club was coming off their fourth consecutive last place finish in the league in 1956–57, as they had a 16–39–15 record, earning 47 points. The struggling Black Hawks had finished in last nine times in the past eleven seasons, and only one playoff appearance since 1946. 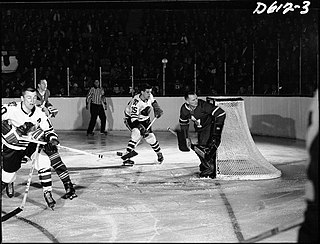 The Eastern Junior B Hockey League (EJBHL) was a Junior "B" ice hockey league based in Eastern Ontario. They were sanctioned by the Ontario Hockey Association and Canadian Amateur Hockey Association, and competed for the All-Ontario Junior "B" title, the Sutherland Cup. 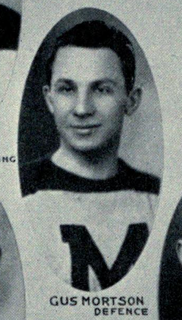