Anthony John Priscott (born 19 March 1941) is an English former professional footballer who played as a winger.

On Saturday 20 January 2007, The News (Portsmouth, UK) Sports Mail Edition featured Priscott in its "Where are they now?" column. He is now a Christian minister.

Earl Mark Sean Stein, more commonly known as Mark Stein, is an English former footballer. Born in South Africa, he moved to England with his family as a child.

Daniel Timothy Hollands is an English professional footballer who plays as a midfielder for Eastleigh. 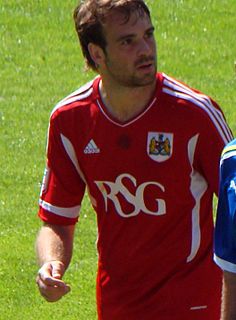 Brett Douglas Pitman is a professional footballer from Jersey who currently plays as a forward for League One club Swindon Town. He has spent most of his career at AFC Bournemouth in two separate spells, totalling 102 goals in 301 games.

Joe Laidlaw was a combative midfielder who played for six English league clubs over a 15-year period spanning three decades.

Michael Anthony Mellows is a former England Amateur International footballer, who later played professionally for Reading and Portsmouth. Born in Woking, Mellows attended Sutton Grammar School for Boys and played firstly for Sutton United before going to train as a teacher at King Alfred College, Winchester. During this time he played in the 1969 FA Amateur Cup Final and made 15 international appearances for the England national amateur football team. While playing for the college he came to the notice of many league scouts and eventually signed for Reading in September 1970, for whom he played 17 games. After his time with the "Biscuitmen", he had spells with Winchester City and Wycombe Wanderers, before signing for Portsmouth in September 1973 as one of new chairman John Deacon’s promised additions to what had been the previous season a very threadbare squad. He came on to make his debut as a substitute in an away victory versus Sheffield Wednesday in October that year and was to remain a regular for the next five years, even winning the clubs coveted "Player of the Year" trophy in 1975. Somewhat a conundrum to the Fratton Faithful his last appearance was at Rotherham on the last day of the 1977/78 season. Mellows then joined Waterlooville and played for them in the Southern League until retiring from football in 1982. A devout Christian, Mellows now runs "Faith and Football"- a community initiative which reaches out through sport to the city’s youth and disadvantaged.

Malcolm Manley was a cultured Scottish footballer whose career was cruelly cut short by a crippling knee injury. Born in Johnstone on 1 December 1949 Manley gained Schoolboy international honours for Scotland before joining his hometown club Johnstone Burgh. Here he quickly caught the eye of scouts south of the border and he signed for Leicester City F.C. in January 1967. The highlights of his time at Filbert Street included being substitute in the 1969 FA Cup Final side and a 1971 Second division Championship winners Medal. He also played as a substitute when Leicester won the 1971 FA Charity Shield. In December 1973, Manley signed for Portsmouth with funds made available by ambitious new chairman John Deacon. Manager John Mortimore planned a rock-like central partnership between the Scotsman and fellow new signing Paul Went which briefly materialised before he severed a cartilage in only his 11th game for the Fratton Park club, never to play professionally again.

David Munks is an English former footballer whose career ran from the mid-1960s to the mid-1970s. Born in Sheffield on 29 April 1947 Munks won two England Youth caps whilst with his first club Sheffield United. The following month he broke into the first team for the first time during a tour of New Zealand. In all Munks was to make over 100 appearances for The Blades before moving to Portsmouth in the 1969 close season. He was to prove such a popular player on the south coast that in 1971 he was awarded the title of Pompey's Player of the Year. Change, however, was afoot at Fratton Park with new chairman John Decon sanctioning the purchase of talented new defenders Paul Went and Malcolm Manley. Costs soon spiralled and Munks was one of the first of a cluster of players to leave to offset the huge new wage bills. In December 1973 he signed for a relegation threatened Swindon but was used inexplicably as a midfielder. Not surprisingly this tactical experiment did not enhance a poor side and he was released at the end of the season when they were finally relegated. Initially loaned to Exeter in the summer of 1974 he signed for the Grecians on a permanent basis in December of that year. Sadly, however, his league career was ended with a knee injury the following year and in 1976 he left the game.

Richard Reynolds is an English former professional footballer whose career ran from the mid-1960s to the mid-1970s.

Nicholas Jennings was an English professional footballer whose 15-year career ran from the early 1960s to the mid-1970s. Born in Wellington, Somerset he played nearly 100 league games for his first club Plymouth Argyle. A speedy winger, he moved to Portsmouth in January 1967 and was to prove such a popular player that in 1971 he was awarded the title of Pompey's Player of the Year. In all he made over 200 appearances for Pompey before moving to Exeter on a free transfer in the 1974 close season, making his final league appearance in 1978. Jennings also played the summer of 1973 in the NASL with the Dallas Tornado. He was named an All-Star Honorable Mention and help Dallas to the league final, which they lost 0–2.

Albert John Milkins was an English professional footballer whose career ran from the start of the 1960s to the end of the 1970s.

Billy Wilson was an English footballer who played professionally in England for 15 years before retiring to run The Pompey public house just outside Fratton Park. Born in Seaton Delaval on 10 July 1946 Wilson was a tough tackling left back who made nearly 250 league appearances for the Ewood Park club. An ever-present during their 1967-68 and 69-70 campaigns he was part of a close knit defence.

Colin Blant is an English retired professional footballer who played for six Football League clubs, in a decade long career that spanned the 1960s and 1970s.

Peter Price is a Welsh former professional footballer who played professionally in England during the 1960s and 1970s.

William Gordon Thompson was a Scottish footballer who played in the Football League as a wing half for Portsmouth and Bournemouth & Boscombe Athletic. He went on to manage clubs in England and the Netherlands.

Andrew Paul Needham is an English former professional footballer who scored 30 goals from 103 appearances in the Football League playing for Birmingham City, Blackburn Rovers and Aldershot. He played as a forward.

Albert McCann was an English footballer who played as a midfielder, winger or forward. 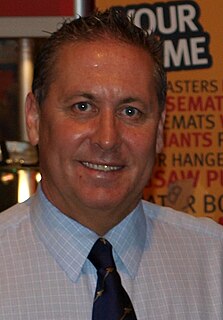 Nicke Kabamba is an English footballer who plays as a striker for Scottish Premiership side Kilmarnock.