Tony Randazzo may refer to:

Kriegspiel is a chess variant invented by Henry Michael Temple in 1899 and based upon the original Kriegsspiel developed by Georg von Reiswitz in 1812. In this game each player can see their own pieces, but not those of their opponent. For this reason, it is necessary to have a third person act as an umpire, with full information about the progress of the game. When it is a player's turn he or she will attempt a move, which the umpire will declare to be 'legal' or 'illegal'. If the move is illegal, the player tries again; if it is legal, that move stands. Each player is given information about checks and captures. They may also ask the umpire if there are any legal captures with a pawn. Since the position of the opponent's pieces is unknown, Kriegspiel is a game of imperfect information. The game is sometimes referred to as blind chess.

The Roman Catholic Archdiocese of Brisbane is a Latin Church metropolitan archdiocese of the Catholic Church in Australia located in Brisbane and covering the South East region of Queensland, Australia.

Alessandro Carmelo "Teddy" Randazzo was an American pop songwriter, singer, arranger and producer, who composed hit songs such as "Goin' Out of My Head", "It's Gonna Take a Miracle", "Pretty Blue Eyes", and "Hurt So Bad" in the 1960s. 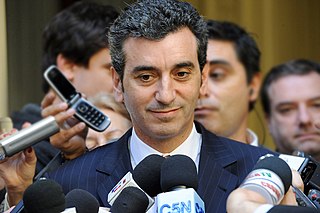 Florencio Randazzo in an Argentine Justicialist Party politician, and formerly the Minister of the Interior and Transport.

Peter Peter Cameron is a former Australian rules football field umpire, who umpired 306 matches between 1977 and 1993 in the Australian Football League, including nineteen finals and three AFL Grand Final appearances. Since completing his umpiring career, he has continued to maintain a public presence through appearances in the E. J. Whitten Legends Game. He also worked at a school in Melbourne Victoria Australia called Wallarano Primary School.

Anthony John Randazzo is an umpire in Major League Baseball. After working in the National League in 1999, he has umpired in both Major Leagues since 2000.

Maurizio Randazzo is an Italian fencer. He won a gold medal in the team épée events at the 1996 and 2000 Summer Olympics.

Teamster Boss: The Jackie Presser Story is a 1992 American drama film directed by Alastair Reid and written by Abby Mann. It is based on the 1989 book Mobbed Up by James Neff. The film stars Brian Dennehy, Jeff Daniels, María Conchita Alonso, Eli Wallach, Robert Prosky and Donald Moffat. The film premiered on HBO on September 12, 1992.

The 2014 Virginia Cavaliers football team represented the University of Virginia in the 2014 NCAA Division I FBS football season. The Cavaliers were led by fifth year head coach Mike London and played their home games at Scott Stadium. They were members of the Coastal Division of the Atlantic Coast Conference.

Mirage is a 1995 action-thriller film directed by Paul Williams and starred by Edward James Olmos and Sean Young.