Tony Roberts is the British author of the Casca series from 2006 onwards [1] . His late mother was his unlikely route into becoming the author of Casca books. In 1986 she bought him the third book in the series after a shopping trip to the city of Bath. Although book 3 was not the best place to start, it got him interested in collecting the rest of the series, and over the next thirteen years without the help of the internet, he gradually collected the 22 Casca books attributed to Barry Sadler.

Casca is a series of paperback novels, and since January 2014, ebooks as well, created and written by author Barry Sadler in 1979. The stories revolve around the life of Casca Rufio Longinus, the soldier in the Roman legions who drove the Holy Lance into the side of Jesus Christ on Golgotha, and who is doomed by Jesus to wander the Earth aimlessly, always as a soldier, until the Second Coming. The character is loosely based on the Longinus legend of Christianity.

Barry Allen Sadler was an American soldier, singer/songwriter, and author. Sadler served as a Green Beret medic, achieving the rank of Staff Sergeant. He served in the Vietnam War from late December 1964 to late May 1965. Most of his work has a military theme, and he is best known for his patriotic "Ballad of the Green Berets," a #1 hit in 1966.

In early 2000, after finally reading the last of these books, he created the official Casca website which helped connect to the fans of the series the world over and received authorisation to call the website the 'official' Casca website from the then franchise owner, Gary Sizemore. In 2014 in order to accommodate his non-casca novels, a new website, Tony Roberts Author, was created to run in tandem with the Casca website.

During this time Tony had been writing his own Casca stories, and when in 2005 he contacted the new owner of the franchise who was looking for a replacement to Paul Dengelegi to continue the series, he was offered the post of writing a new Casca novel. Roberts wrote Casca 25: Halls of Montezuma in 4 months, his debut novel, and it was published in September 2006.

The new Casca novel, The Viking, is due for release in September 2017.

The fifth novel in the series, Throne of Envy, is currently being written and is due for release in August 2017.

In September 2015 Roberts released the first in a fantasy series about a dark elf/human girl called Faerowyn, available only on ebooks, entitled Dark Blade which is set in a fantasy world. Faerowyn has been left a trail by her missing father to discover her inheritance but she has to overcome a number of obstacles if she is to realise this.

The sequel, Heir of Gorrodan, was released in ebook format in September 2016. The third novel in the series is due for release in August 2017.

In May 2016 Roberts launched the first in a series of novels about a fictional rock band called Siren, following the life of a girl called Katie Long from her fifteenth birthday onwards. Although gifted with a singing voice and an accomplished guitarist, she has no friends, is bullied at school and suffers from asthma and a series of allergies. The novel charts her life as she attempts to realise her dream of becoming a rock star. The time period of Siren covers October 1979 to August 1981.

As an extra piece of interest, Roberts co-wrote two songs that appear in Siren, along with a couple of guitarist friends, both of which can be heard on the author's website.

The sequel, Sirensong, was released in April 2017 and was set four years after the events of Siren, covering the time period 1985 to 1990. The focus shifted to the four members of the band as they battled against addiction, pressures of touring and fame, and artistic differences. Once more, Roberts co-wrote a song to go with the novel and this, too, can be heard on either the author's website, youtube or soundcloud.

The next in the series will be due for release in the Spring of 2018 and is entitled 'Katie'.

A Roman legion was a large unit of the Roman army.

Marcus Junius Brutus, often referred to as Brutus, was a politician of the late Roman Republic. After being adopted by his uncle he used the name Quintus Servilius Caepio Brutus, but eventually returned to using his original name. He took a leading role in the assassination of Julius Caesar.

The Battle of Philippi was the final battle in the Wars of the Second Triumvirate between the forces of Mark Antony and Octavian and the leaders of Julius Caesar's assassination, Marcus Junius Brutus and Gaius Cassius Longinus in 42 BC, at Philippi in Macedonia. The Second Triumvirate declared this civil war ostensibly to avenge Julius Caesar's assassination in 44 BC, but the underlying cause was a long-brewing conflict between the so-called Optimates and the so-called Populares. 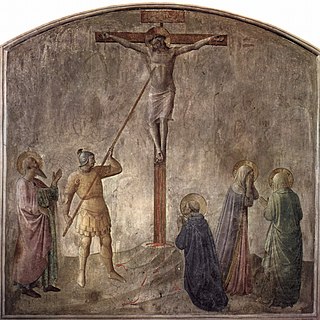 Longinus is the name given in Christian mythology to the unnamed Roman soldier who pierced Jesus in his side with a lance and who in medieval and some modern Christian traditions is described as a convert to Christianity. The lance is called in Christianity the "Holy Lance" (lancea) and his story is related in the Latin Vulgate Bible during the Crucifixion. This act is said to have created the last of the Five Holy Wounds of Christ.

The Holy Lance, also known as the Lance of Longinus, the Spear of Destiny, or the Holy Spear, according to the Gospel of John, is the lance that pierced the side of Jesus as he hung on the cross.

The Battle of the Sabis, also known as the Battle of the Sambre or the Battle against the Nervians, was fought in 57 BC near modern Saulzoir in Northern France, between the legions of the Roman Republic and an association of Belgic tribes, principally the Nervii. Julius Caesar, commanding the Roman forces, was surprised and nearly defeated. According to Caesar's report, a combination of determined defence, skilled generalship, and the timely arrival of reinforcements allowed the Romans to turn a strategic defeat into a tactical victory. 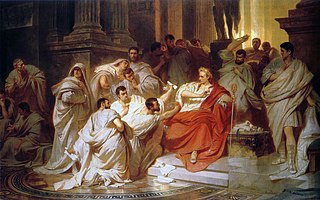 Publius Servilius Casca Longus was one of the assassins of Gaius Julius Caesar. He and several other senators conspired to kill him, a plan which they carried out on 15 March, 44 BC. Afterwards, Casca fought with the liberators during the Liberators' civil war. He is believed to have died by suicide after their defeat at the Battle of Philippi in 42 B.C.

Longinus may refer to: 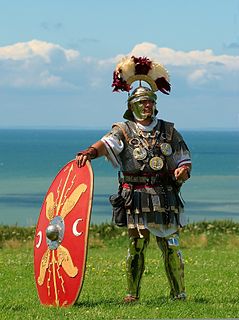 A centurion was a professional officer of the Roman army after the Marian reforms of 107 BC. Most centurions commanded groups of centuries of around 100 legionaries, but senior centurions commanded cohorts or took senior staff roles in their legion. Centurions were also found in the Roman navy. In the Byzantine Army, they were also known by the name kentarch. Their symbol of office was the vine staff, with which they disciplined even Roman citizens protected from other forms of beating by the Porcian Laws. 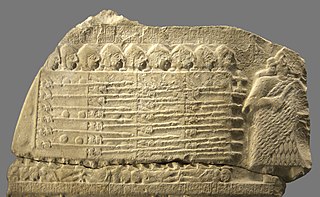 The Marian reforms of 107 BC were a group of military reforms initiated by Gaius Marius, a statesman and general of the Roman Republic.

The Cantabrian Wars, sometimes also referred to as the Cantabrian and Asturian Wars, were the final stage of the two-century long Roman conquest of Hispania, in what today are the provinces of Cantabria, Asturias and León, in northwestern Spain.

The Liberators' civil war was started by the Second Triumvirate to avenge Julius Caesar's murder. The war was fought by the forces of Mark Antony and Octavian against the forces of Caesar's assassins Marcus Junius Brutus and Gaius Cassius Longinus in 42 BC.

Like piracy, the mercenary ethos resonates with idealized adventure, mystery, and danger, and appears frequently in popular culture. Many are called adventurers, filibusters, soldiers of fortune, gunslingers, gunrunners, ronin, and knights errant. 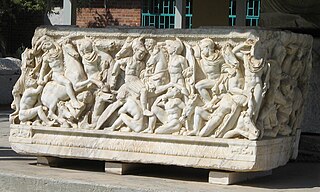 The Hellenistic armies is the term applied to the armies of the successor kingdoms of the Hellenistic period, which emerged after the death of Alexander the Great. After his death, Alexander's huge empire was torn between his successors, the Diadochi. During the Wars of the Diadochi, the Macedonian army, as developed by Alexander and Philip II, gradually adopted new units and tactics, further developing Macedonian warfare and improving on the tactics used in the Classical era. The armies of the Diadochi bear few differences from that of Alexander, but during the era of the Epigonoi, the differences were obvious, favoring numbers over quality and weight over maneuverability. The limited availability of Greek conscripts in the east led to an increasing dependence on mercenary forces, whereas in the west, Hellenistic armies were continuously involved in wars, which soon exhausted local manpower, paving the way for Roman supremacy. The major Hellenistic states were the Seleucid Empire, Ptolemaic Egypt and the Antigonid kingdom (Macedonia). Smaller states included: Attalid Pergamum, Pontus, Epirus, the Achaean League, the Aetolian League, Syracuse, and other states.

Immortality is a popular subject in fiction, as it explores humanity's deep-seated fears and comprehension of its own mortality. Immortal beings and species abound in fiction, especially fantasy fiction, and the meaning of "immortal" tends to vary. 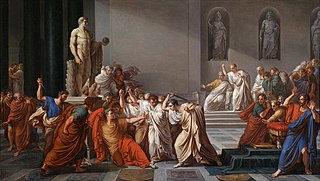 The assassination of Caesar was the result of a conspiracy by many Roman senators led by Gaius Cassius Longinus, Decimus Junius Brutus Albinus, and Marcus Junius Brutus. They stabbed Caesar to death in a location adjacent to the Theatre of Pompey on the Ides of March 15 March 44 BC. Caesar was the Dictator of the Roman Republic, having recently been declared dictator perpetuo by the Senate of the Roman Republic. This declaration made many senators fear that Caesar wanted to overthrow the Senate in favor of totalitarianism, as well as the fear that Caesar’s pro plebeian manifesto would endanger them financially. The conspirators were unable to restore the Roman Republic, and the ramifications of the assassination led to the Liberators' civil war and ultimately to the Principate period of the Roman Empire.

Centurion is a historical fiction novel (ISBN 0755327764) written by Simon Scarrow, published by Headline Book Publishing in 2007. It is book 8 in the Eagles of the Empire series, continuing Macro and Cato's adventures in the eastern provinces of the Roman Empire that began in The Eagle in the Sand.

The Great Commandment is a 1939 American Christian film directed by Irving Pichel, which portrays the conversion to Christianity of a young Zealot, Joel, and the Roman soldier Longinus through the teachings of Jesus in his Parable of the Good Samaritan. It was co-produced by Rev. James K. Friedrich and released by Cathedral Films in 1939. Its theatrical release was in 1941 by Twentieth Century Fox.