Riley Anthony Winton Rudd (24 April 1924 – 29 May 2017) was an English stockbroker who found success in the world of technology start-ups, but came under censure from the Department of Trade and Industry for his business practices. Among his children were the politician Amber Rudd and the public relations executive Roland Rudd.

Tony Rudd was born in Wandsworth, [1] London, on 24 April 1924 to the businessman Frederick Rudd [2] and a Miss Maguire, later being brought up by Frederick's ex wife Grace Winton Rudd (née Brown). [3] He was educated at Blundell's School before going up to University College, Oxford to read Philosophy, Politics and Economics. [4] His studies were interrupted by the Second World War during which he served as a navigator for a Polish squadron in the Royal Air Force. He flew in Mosquitos and had to bail out over Germany with his pilot after their aircraft was hit by fire from a United States aircraft in a friendly fire incident. [2] His memoirs of his time in the RAF were published in 1990 as One Boy's War. After the war, Rudd returned to Oxford to complete his studies.[ citation needed ]

In 1949, Rudd joined the Bank of England. Three years later he became the bank's representative in Washington. In 1955 he switched to journalism at the Manchester Guardian where he covered the Suez Crisis from Egypt before joining the paper's city desk. [2]

In 1967, Rudd opened his own stockbroking firm, Rowe Rudd, in London Wall, which was one of the first to use a large open-plan trading room. Among those who worked for him were Michael Spencer, founder of Icap, Brian Griffiths who became head of policy for Margaret Thatcher, and Tony "the animal" Parnes who became embroiled in the Guinness scandal.

Novelist Jeffrey Archer became a client and was inspired to write Not a Penny More, Not a Penny Less (1976). Rudd enjoyed success as the broker to technology companies such as Racal Electronics, Rotork and Plessey but the onset of blindness forced him to give up stockbroking in 1981.

He turned to venture capitalism but came under increasing scrutiny from the Department of Trade and Industry (DTI) and in the satirical current affairs magazine Private Eye over his business practices. [2] In 1988, the DTI described him in a report as unfit to be a director of "any company whether private or public". [5] The extent to which he continued to be involved in the day-to-day running of the family investment vehicle, despite his daughter Amber becoming the director at the age of 24, was raised in the press when her political career took off. [5]

In 1952, Rudd married Ethne Etain FitzGerald, [6] a history graduate from the University of Oxford. [2] She was the daughter of Maurice Pembroke Fitzgerald, QC (grandson of the judge and Liberal politician John FitzGerald, Baron FitzGerald of Kilmarnock), [7] and Christine Fitzgerald (née Bradhurst; daughter of Augustus Maunsell Bradhurst). [8] Among their children were the British home secretary Amber Rudd [5] and the public relations executive Roland Rudd. Rudd and his wife had two other children, Amanda and Melissa. [2]

Rudd owned a townhouse in Kensington, and Chalcot House near Bath where in later life he and his wife entertained a circle of political and business friends such as Peter Walker, Arnold Weinstock, and Alan Clark. When their daughter Amber got the job of "aristocracy co-ordinator" for the film Four Weddings and a Funeral , she hired her parents as extras for £100 per day and Tony Rudd appeared in the wedding scenes; he was required to use his own morning suit to save on production costs. [2]

Rudd died on 29 May 2017. Just days after his death, his daughter Amber appeared on British television to represent the Conservative Party in a debate for the United Kingdom General Election of June 2017. Her brother Roland commented, "My parents had a strong view about carrying on. He would have wanted her to do the debate". [2] 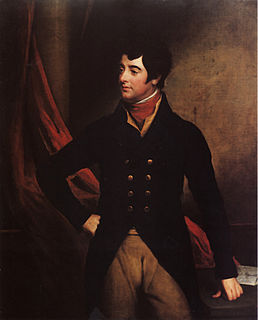 Lord Edward FitzGerald was an Irish aristocrat and revolutionary who died of wounds received while resisting arrest on a charge of treason.

Sir Robert Keith Arbuthnot, 2nd Baronet was a Scottish civil servant who served as Secretary to the Board of Trustees and Manufactures.

George FitzGerald, 16th Earl of Kildare was known as the "Fairy Earl", apparently for no other reason than that his portrait, which is extant, was painted on a small scale." He was the son of Thomas FitzGerald and Frances Randolph and grandson of Edward FitzGerald and Agnes Leigh.

Sir Arthur Bower Forwood, 1st Baronet, was an English merchant, shipowner, and politician. He was a Conservative Member of Parliament from 1885 until his death, and in 1895 he was created a baronet.

Sir Valentine Browne, 5th Baronet and 3rd Viscount Kenmare in the Jacobite Peerage was the son of Nicholas Browne, 2nd Viscount Kenmare, and his wife, Helen. After the death of his father in 1720, he succeeded to the family estates which had been under the management of John Asgill because his grandfather Sir Valentine Browne was a supporter of the Jacobite cause who took part in the Battle of Aughrim. For this he was attainted and the family estates forfeited.

Amber Augusta Rudd is a British politician who served as Home Secretary from 2016 to 2018 and Secretary of State for Work and Pensions from 2018 to 2019. She was first elected Member of Parliament (MP) for Hastings and Rye in 2010, representing the Conservative Party, and stood down from parliament in 2019.

Major Sir George Peter Maurice FitzGerald, 5th Baronet, 23rd Knight of Kerry was a hereditary knight and British soldier. He was the son of Sir Arthur Henry Brinsley FitzGerald and Mary Eleanor Forester. He was educated at Harrow School and at Sandhurst. He fought in the Palestine Campaign in 1939, where he was mentioned in despatches. He fought in the Second World War and was decorated with the award of Military Cross (M.C.) in 1944. He retired from the military in 1948, with the rank of Major, late of the Irish Guards.