Scott was drafted by the Montreal Expos in the 71st round of the 1969 Major League Baseball draft. After five seasons in their farm system, he received a September call-up to the Expos in 1973. He appeared in eleven games as a pinch runner, and received only one at-bat, in which he struck out.

After repeating the same formula with Scott in 1974, the Expos named him their starting centerfielder in 1975. He batted .191 with eleven runs batted in and no home runs through the All-Star break, and was replaced in center by Pepe Mangual for the rest of the season. He spent all of 1976 with the Triple-A Denver Bears, with whom he batted .311.

After the 1976 season, he was traded with Steve Dunning and Pat Scanlon to the St. Louis Cardinals for Bill Greif, Ángel Torres and Sam Mejías. [1]

Scott enjoyed moderate success with the Cardinals, as he batted .291 with three home runs and 41 RBIs sharing playing time with Jerry Mumphrey during his first season in St. Louis. After falling into a fourth outfielder role in 1978, he was given the starting centerfield job in 1979. He responded by hitting six home runs while driving in 68 runs and stealing 37 bases, all career highs.

On June 7, 1981 Scott was traded to the Houston Astros for Joaquín Andújar.

Scott batted .293 and provided a steady glove in centerfield in the spacious Astrodome his first season in Houston. He was the starting centerfielder again in 1982, but after batting .239 with one home run and 29 RBIs, he was relegated to a fourth outfielder role in 1983. He was released in June 1984 with a .190 batting average, and caught on with the Montreal Expos for the rest of the season.

In 1989, Scott batted .360 in 51 games with the Winter Haven Super Sox of the Senior Professional Baseball Association.

Hubert "Hubie" Brooks is an American former professional baseball right fielder, third baseman, and shortstop. He played fifteen seasons in Major League Baseball (MLB) from 1980 to 1994 for the New York Mets, Montreal Expos, Los Angeles Dodgers, California Angels, and Kansas City Royals. Brooks was selected third overall in the 1978 Major League Baseball draft by the New York Mets and went on to play for five different teams over a 15-year career, and was twice named an All-Star. MLB pitcher Donnie Moore, who died in 1989, was Brooks' cousin.

Tommie Lee Agee was an American professional baseball player. He played in Major League Baseball as a center fielder from 1962 through 1973, most notably as a member of the New York Mets team that became known as the Miracle Mets when, they rose from being perennial losers to defeat the favored Baltimore Orioles in the 1969 World Series for one of the most improbable upsets in World Series history. Agee performed two impressive defensive plays in center field to help preserve a Mets victory in the third game of the series.

Joel Randolph Youngblood III is a former American professional baseball player. He was a versatile player, who could play many different positions, as well as pinch hit. After his playing career ended, he served as the third base coach for the Arizona Diamondbacks.

Robert Herbert Forsch was an American right-handed starting pitcher who spent most of his sixteen years in Major League Baseball (MLB) with the St. Louis Cardinals (1974–1988) before finishing his playing career with the Houston Astros (1988–1989). He was a member of the 1982 World Series Champions and National League (NL) pennant winners in 1985 and 1987.

Ellis Clarence Valentine is a former Major League Baseball right fielder. He is remembered for having one of the all-time great throwing arms. "There's a plateau where you can't throw the ball any harder and you can't be any more accurate", said former Montreal manager Felipe Alou. "That was Ellis Valentine."

Jerome Cardell White is an American former professional baseball outfielder and coach. Listed at 5' 10", 164 lb., White was a switch hitter and threw right handed. He was born in Shirley, Massachusetts.

Daryl Lamont Boston is an American former Major League Baseball outfielder, and the current first base coach for the Chicago White Sox. 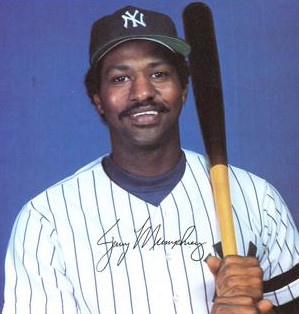 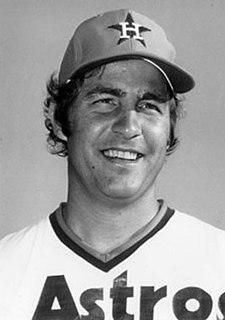 The 1977 Montreal Expos season was the ninth season in the history of the franchise. The team finished fifth in the National League East with a record of 73–87, 26 games behind the Philadelphia Phillies. This was the first year the team played their home games in Olympic Stadium, having left Jarry Park Stadium after the 1976 season.

Bruce Armand Boisclair is a former American Major League Baseball outfielder, who spent his entire major league career with the New York Mets from 1974 to 1979. He also played for the Hanshin Tigers of Nippon Professional Baseball in 1980.

Roy Joseph Staiger is a former Major League Baseball third baseman. He was part of the first player trade between the New York Mets and New York Yankees that did not also involve a third team.