Tony Oludewa Skinn (born February 8, 1983) is a Nigerian American former professional basketball player, and a former college basketball player, who played starting guard for the George Mason University Patriots. Skinn is currently an assistant coach for the Seton Hall University men's basketball team. Born in Lagos, Nigeria, Skinn migrated with his family to the United States at the age of two. He has since lived in the Washington, D.C. metropolitan area.

In his senior season, Skinn averaged 12.6 points, 3.5 rebounds, and 2.8 assists per game. The season was marked by the Patriots' surprising run to the Final Four. He scored a season-high 23 points and hit the game-winning three-point shot with 10.8 seconds left, in GMU's ESPN BracketBusters game against Wichita State on February 18, 2006, ultimately landing the Patriots in the USA Today/ESPN Top 25 for the first time in school history. The Patriots posted a 23-7 record during the regular season, and while they did not win the 2006 CAA Men's Basketball Tournament title, they were awarded the program's first at-large bid as an 11 seed.

In GMU's run to the Final Four, Skinn scored eight points against defending champion North Carolina in the second round, 14 points in a rematch against Wichita State in the Sweet Sixteen, 10 points against top-seeded UConn in the Elite Eight, and 14 points against eventual back-to-back tournament winners Florida Gators.

After GMU's Elite Eight victory, Skinn told reporters that Coach Jim Larranaga fired up his players by telling them that UConn's players did not even know what conference the Patriots came from. "That's a little bit of disrespect," Skinn recounted. "Coach told us the CAA stands for the 'Connecticut Assassin Association'."[ citation needed ]

In 2006, Skinn signed a contract to play with the Croatian club Split, of the Adriatic League, after he wasn't drafted in the 2006 NBA Draft.

In July 2007, Skinn was invited to play for the Orlando Magic at the Orlando Summer League. In July 2008, he signed with Gravelines Dunkerque Basket in the French Pro A league, recording team-highs of 16.6 points per game, 3.8 assists per game, and shooting 43% from 3PT range.

On August 5, 2009, he signed with Pistoia Basket of the Italian Second Division. On October 1, 2010, Skinn signed with the New Yorker Phantoms of the German League. He then played with Ironi Ashkelon in the Israeli League.

On July 8, 2012, the Nigerian national basketball team defeated the Dominican Republic, to earn the last spot in the 2012 Summer Olympics. As the starting point guard for the team, Skinn averaged 10.0 points per game in the FIBA Olympic qualifiers. In the game against the United States national team, Nigeria lost the game by 83 points, 156-73. It was the largest deficit by a losing team and a new Olympic record for most points scored in a game by the United States. While the Nigerian national team's performance was less than favorable, Skinn was the catalyst for arguably the most memorable highlight during the 2012 Olympic tournament against the United States' guard James Harden.

Nikolaos Galis, commonly known as either Nikos Galis, or Nick Galis, is a retired Greek professional basketball player. He was named one of FIBA's 50 Greatest Players in 1991, is an inaugural member of the FIBA Hall of Fame and was chosen as one of the 50 Greatest EuroLeague Contributors in 2008. Galis is widely regarded as one of Europe's greatest scorers to ever play the game, as well as one of the all-time greatest players in FIBA international basketball history. In 2017, he was inducted into the Naismith Memorial Basketball Hall of Fame.

The George Mason Patriots are the athletic teams of George Mason University (GMU) of Fairfax, Virginia. The Patriots compete in Division I of the National Collegiate Athletic Association (NCAA) as members of the Atlantic 10 Conference for most sports. 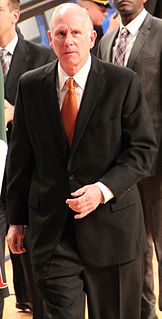 James Joseph Larrañaga is an American college basketball coach and the head men's basketball coach of the University of Miami, a position he has held since 2011. Previously, he served as the head men's basketball coach at American International College from 1977 to 1979, Bowling Green State University from 1986 to 1997, and George Mason University from 1997 to 2011, where he coached the Patriots to 13 consecutive winning seasons and became a media sensation during the Patriots' improbable run to the Final Four of the 2006 NCAA Division I Men's Basketball Tournament. Larrañaga won several national coach of the year awards in 2013 and has won over 600 games as a head coach.

Lamar Edward Butler, Jr. is an American former basketball player. He was a starting guard for the Patriots of George Mason University during the Patriots' surprising run to the Final Four.

Folarin Yaovi Campbell is a Nigerian-American basketball player who last played for Maccabi Kiryat Motzkin of the Israeli National League. He played college basketball for the George Mason Patriots. Campbell started at guard for the Patriots, including during his sophomore season when the Patriots made their improbable run to the NCAA Tournament's Final Four in 2006. The team was nicknamed the Cinderella Team.

Loren Stokes is an American professional basketball player from Buffalo, New York. He was a combo guard at Hofstra University from the 2003–04 season to 2006–07. He is 6'3" and weighs 175 lbs. Stokes is one of six players in Hofstra Pride history to score at least 2,000 points, amassing 2,148 points over his four-year career. A three time first team CAA player, 2004-05 all defensive CAA player, and 2006-07 CAA player of the year, Stokes was eligible for the 2007 NBA Draft, he went undrafted. He was offered an invitation to play for the Orlando Magic in the NBA's summer league. Stokes was playing basketball in Cyprus for APOEL, for whom he was averaging 14.4 points per game. He has also played in Belgium and Ukraine. In early 2011, Stokes signed with the Bay Hawks and in 2012 he was traded to the Canton Charge for Keith McLeod, but was later waived due to personal issues. Loren Stokes is also the brother of Leonard Stokes who played basketball for the University of Cincinnati.

Eric Demarqua Maynor is an American former professional basketball player and current assistant coach for the Oklahoma City Blue of the NBA G League. He played college basketball for Virginia Commonwealth University. As a senior, he averaged 22.4 points, 6.2 assists, 3.6 rebounds and 1.7 steals per game in the 2008–2009 season.

The 2005–06 George Mason Patriots men's basketball team represented George Mason University in the 2005–2006 NCAA Basketball season. The team reached several milestones, including a team record 23 regular season wins, and a trip to the NCAA Tournament. The Patriots reached the Final Four of the NCAA, becoming the first team from the Colonial Athletic Association to accomplish that feat.

George Mason Patriots men's basketball program dates to 1966. Basketball and athletics as a whole have contributed significantly to George Mason's popularity and success. The Patriots are the mascot and logo of George Mason University. The Patriots home court for both the men and women is at the EagleBank Arena, which is in Fairfax Virginia. The Patriots compete in the Atlantic 10 Conference. Until 2012–13, they competed in the Colonial Athletic Association, better known as the CAA. Both conferences are part of NCAA Division I sports. The men's team is coached by Dave Paulsen. The women's team is coached by Nyla Milleson.

Bria Nicole Hartley is an American-born French professional basketball player for the Phoenix Mercury of the Women's National Basketball Association (WNBA). She was drafted 7th overall by the Seattle Storm in the 2014 WNBA Draft and was immediately traded to the Washington Mystics. Hartley played point guard for the UConn women's basketball team, and won back to back national championships in 2013 and 2014.

Trevor Releford is an American basketball player, who lastly played for Löwen Braunschweig of the Basketball Bundesliga (BBL). He played college basketball for the University of Alabama. He has a brother, Travis Releford, that played basketball for Kansas. 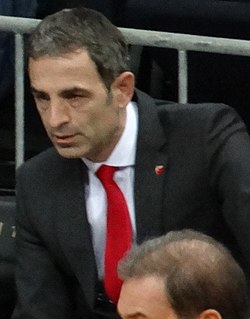 Milenko Topić is a Serbian basketball coach and former player.

Ryan Jamar Boatright is an American-born naturalized Armenian professional basketball player for BC Avtodor of the VTB United League. He also represents the Armenian national basketball team. He completed his college career at Connecticut in 2015. Boatright was a key player for the Huskies' 2013–14 NCAA Championship team, as he earned 2014 NCAA Final Four All-Tournament team honors.

Philip Alexander "Phil" Goss is an American former basketball player currently working as an assistant coach for the Capital City Go-Go of the NBA G League. He last played for PAOK Thessaloniki of the Greek Basket League. At a height of 6'2" tall, he can play at both the point guard and shooting guard positions.

Michael Patrick Gbinije is a Nigerian-American professional basketball player recently played for Nevėžis Kėdainiai of the Lithuanian Basketball League. He played one season of college basketball for Duke before transferring to Syracuse in 2012. He was drafted 49th overall by the Pistons in the 2016 NBA draft. He has represented the Nigerian national team.

Sterling Dupree Gibbs is an American professional basketball player for Koper Primorska of the Slovenian League. He played college basketball at Texas, Seton Hall and Connecticut.

Curtis Reynard McCants is an American former professional basketball player. A 6-foot point guard, he played college basketball at George Mason for 3 years, being named CAA Rookie of the Year in 1994 and first team All-Conference in 1996 before leaving the program after a fight with a teammate. He finished his college career at Cal State Bakersfield in the NCAA Division II and started his professional career in 1997 playing in Israel. In 2001 he was the top scorer of the LNB Pro A in France. In 10 years of pro career he played in several countries in Europe and South America. McCants has a daughter, Asia McCants, who played Division 1 basketball at Howard University.

Walter Roderick Sellers is an American former professional basketball player. He played at Wilson High School in his native Florence, South Carolina, and played college basketball at UConn, where he was an all-conference performer in his senior year in 1992. After going undrafted in the 1992 NBA draft, Sellers opted not to sign for the Grand Rapids Hoops, which had selected him first overall in the CBA draft, and instead went to Europe, starting his professional career with Greek side AEK Athens. Sellers spent his whole career in Europe, playing in Greece, France, Italy, Spain and Turkey: he appeared in three Euroleague seasons and in 1999 he was the FIBA Saporta Cup Finals Top Scorer. In his 14-year career he has won 1 French league, 2 French cups, 1 Italian Supercup and 1 Semaine des As.

Boubacar Richard Aw is a Senegalese former professional basketball player. After growing up in Thiès, Aw moved to the United States in 1993 and he played high school basketball in Lake Waccamaw, North Carolina; he then went on to play 4 years in college at Georgetown. After graduating from college, Aw had a 10-year professional career in Central and South America. He was also a member of the Senegalese national basketball team, with which he won the gold medal during the 1997 FIBA Africa Championship and participated in the 1998 FIBA World Championship. After retiring from playing basketball, Aw has become a teacher and youth basketball coach.