Robert Anthony Snow (June 1, 1955 – July 12, 2008) was an American journalist, political commentator, television news anchor, syndicated columnist, radio host, musician, and the 23rd White House Press Secretary under President George W. Bush, from May 2006 until his resignation in September 2007. Snow also worked for the first President Bush as chief speechwriter and Deputy Assistant of Media Affairs, from 1991 to 1993. Between his two White House stints, Snow was a broadcaster and newspaper columnist. After years of regular guest-hosting for The Rush Limbaugh Show and providing news commentary for National Public Radio, he launched his own talk radio program, The Tony Snow Show, which went on to become nationally syndicated. He was also a regular personality on Fox News Channel beginning in 1996, hosting Fox News Sunday and Weekend Live , and often substituting as host of The O'Reilly Factor . In April 2008, Snow briefly joined CNN as a commentator. [1] He also made several notable speeches, including keynote addresses at the Conservative Political Action Conference in 2007 and 2008. In his journalistic and governmental capacities, Snow generally supported conservative causes. [2] [3] Snow died of colon cancer on July 12, 2008.

Snow was born in Berea, Kentucky, and raised in Cincinnati, Ohio. His father, Jim, was a social studies teacher, guidance counselor, and an assistant principal at Princeton High School. His mother was an inner-city nurse who died of colon cancer in 1973, when Snow was 17. Snow developed an early interest in journalism, public policy, and politics, and was editor of his high school newspaper.

After graduating from Princeton High School in 1973, [4] Snow obtained in 1977 a Bachelor of Arts in philosophy from Davidson College in North Carolina. He then taught physics in high school. He attended graduate programs in philosophy and economics at the University of Chicago. [5]

In Ohio, Snow originally registered to vote as a Democrat. He was a convert to Roman Catholicism. [6] [7]

From 1993 to 2000, The Detroit News published his commentaries, and from 1994 to 2000 he was a Counterpoint Columnist for USA Today . Snow also wrote a syndicated column for Creators Syndicate between 1993 and 2000; his commentaries appeared in more than 200 newspapers nationwide. Snow won numerous awards during his print career, including those from the Virginia Press Association, the Detroit Press Club, the Society of Professional Journalists, the American Society of Newspaper Editors, The Associated Press, and Gannett.

Snow appeared on radio and television programs worldwide including The McLaughlin Group , The MacNeil–Lehrer NewsHour , Face the Nation , Crossfire , and Good Morning America . Until 1994, Snow was the writer, correspondent and host of the PBS news special The New Militant Center.

From 1996 to 2003, Snow was the first host of FOX News Sunday , a Sunday morning interview and roundtable program produced by Fox News, airing on affiliates of the Fox Broadcasting Company and later in the day on Fox News Channel.

Snow was the primary guest host of Rush Limbaugh's program beginning in the mid-1990s. He was also a frequent commentator on National Public Radio. Snow's own Tony Snow Show on Fox News Radio premiered in late 2003. It ended when he became White House Press Secretary in April 2006.

In April 2006, Snow was named White House Press Secretary in the George W. Bush administration, replacing Scott McClellan. His appointment to the position was formally announced on April 26, 2006. His selection was initially criticized because of some of his past comments about Bush. [8] Bush acknowledged Snow's criticisms during the announcement of Snow's appointment, saying that Snow was "not afraid to express his own opinions". [9]

Snow began his new press secretary duties on May 8, 2006. He decided to leave the position of press secretary after new White House Chief of Staff Josh Bolten asked all staff members to either commit to staying through the end of Bush's second term, in January 2009, or to leave by Labor Day of 2007. [10] On September 13, 2007, Snow gave his final press briefing, saying that he would miss the duties of his position, and that "I love these briefings". [11]

In February 2005, while still at Fox News, Snow was diagnosed with colon cancer. He returned to broadcasting in April 2005 after undergoing surgery. [17] [18] On March 23, 2007, after almost a year as press secretary, Snow once again took a leave of absence to seek treatment for recurrent cancer. [19] [20] [21] [22] Treatment for the spreading cancer in his final few months forced periodic absences from Snow's duties as press secretary, his subsequent position as a CNN commentator, and his public speaking engagements. [23] [24]

On July 12, 2008, Snow died at Georgetown University Hospital as a result of colon cancer that had spread to his liver. [25] He was 53 years old. Reacting to Snow's death, President George W. Bush praised Snow's ability to bring "a certain civility to this very contentious job." [10] 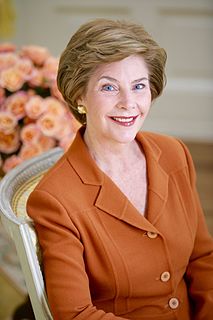 Laura Lane Bush is an American educator who was First Lady of the United States as the wife of Former President George W. Bush, from 2001 to 2009. Bush previously served as First Lady of Texas from 1995 to 2000.

Scott McClellan was the 22nd White House Press Secretary (2003–06) for President George W. Bush, and author of a controversial No. 1 New York Times bestseller about the Bush Administration titled What Happened. He replaced Ari Fleischer as press secretary in July 2003 and served until May 10, 2006. McClellan was the longest serving press secretary under George W. Bush.

The White House press secretary is a senior White House official whose primary responsibility is to act as spokesperson for the executive branch of the United States government administration, especially with regard to the president, senior aides and executives, as well as government policies.

Joseph Charles Wilson IV was an American diplomat who was best known for his 2002 trip to Niger to investigate allegations that Saddam Hussein was attempting to purchase yellowcake uranium; his New York Times op-ed piece, "What I Didn't Find in Africa"; and the subsequent leaking of information pertaining to the identity of his wife Valerie Plame as a CIA officer. He also served as the CEO of a consulting firm he founded, JC Wilson International Ventures, and as the vice chairman of Jarch Capital, LLC. 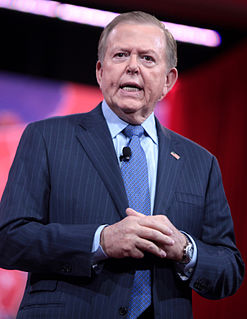 Fox News Sunday is a Sunday morning talk show airing on the broadcast Fox network since 1996, as a presentation of Fox News Channel. It is the only regularly scheduled Fox News program carried on the main Fox broadcast network. 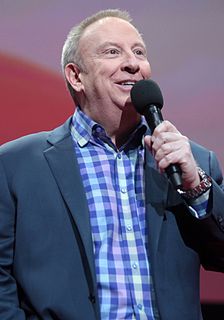 Mike Gallagher is an American radio host and conservative political commentator. He is the host of The Mike Gallagher Show, a nationally syndicated radio program that airs throughout the United States on Salem Radio Network and is also a FOX News Channel Contributor and guest host. According to Talkers magazine, Gallagher is the ninth most-listened-to radio talk show host in the United States. 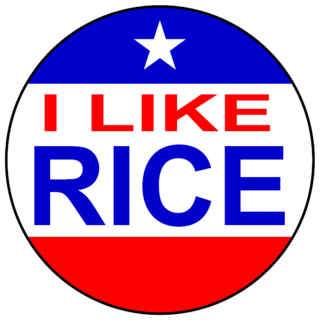 The "Draft Condi"movement was a grassroots effort to draft United States Secretary of State Condoleezza Rice to run for President of the United States in the 2008 U.S. election.

Mary Tillotson is an American broadcast journalist formerly with CNN, for whom she was a White House correspondent and host of CNN & Co.

Dana Marie Perino is an American political commentator and author who served as the 24th White House Press Secretary, serving under President George W. Bush from September 14, 2007, to January 20, 2009. She was the second female White House Press Secretary, after Dee Dee Myers, who served during the Clinton Administration. She is currently a political commentator for Fox News, while also serving as a co-host of the network's talk show The Five, and is a book publishing executive at Random House. On October 2, 2017, she began hosting The Daily Briefing with Dana Perino on Fox News. 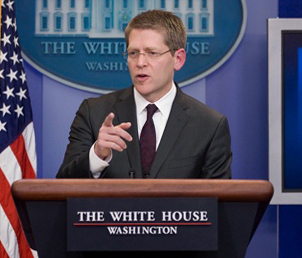 James Ferguson Carney is a former White House press secretary to President Barack Obama. He served as press secretary from January 2011 through June 2014. For the first two years of Obama's presidency, Carney was director of communications for Vice President Joe Biden. Prior to his government service, Carney worked for 20 years at Time Magazine, and was the magazine's Washington bureau chief from 2005 to 2008. As a Washington-based reporter, Carney appeared frequently on various political talk shows, including This Week with George Stephanopoulos for ABC News. 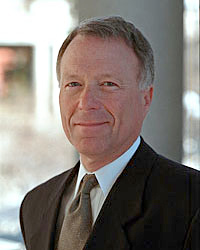 I. Lewis "Scooter" Libby is an American lawyer and former adviser to Vice President Dick Cheney.

Robert Lane Gibbs is an American communication professional who served as executive vice president and global chief communications officer of McDonald's from 2015 to 2019 and as the twenty-fifth White House Press Secretary from 2009 to 2011.

Timothy Goeglein was special assistant to U.S. President George W. Bush and Deputy Director of the White House Office of Public Liaison from 2001 to 2008. In January 2009, Goeglein became the Vice President of External and Government Relations for the Christian Organization Focus on the Family.