Sergeant Anthony L. Starcer, USAAF, (died 1986) was line mechanic for the 91st Bombardment Group (Heavy), of the VIII Bomber Command, Eighth Army Air Force, based at Bassingbourn, UK in 1942–43. He painted many pieces of nose art on the Fortresses of "The Ragged Irregulars", including the George Petty girl "Telephone Girl" for the Memphis Belle. [1] [2] The 91st Bombardment Group (H) website lists 124 aircraft that his work adorned. [3]

In 1981, Starcer recreated his nose art at Dover Air Force Base, Delaware, [4] for restored B-17G Shoo Shoo Baby, one of the few surviving combat veteran Flying Fortresses, [5] based on Alberto Vargas' "Hawaii" Esquire pin up art. [6] This B-17 flew 24 combat missions from England with the 91st BG, plus three aborts for mechanical problems, before being listed as missing in action on 29 May 1944. On its final mission, to the Focke Wulf aircraft component factory at Poznań, Poland, it crash-landed at Malmö Airport, Sweden, where it would see post-war service before becoming a museum piece.

He was married to Jackie Starcer. [7]

Liberty Belle was a popular moniker with over two dozen known individual Boeing B-17 Flying Fortresses and Consolidated B-24 Liberators using the name in combat during World War II.

Memphis Belle is a Boeing B-17F Flying Fortress used during the Second World War that inspired the making of two motion pictures: a 1944 documentary film, Memphis Belle: A Story of a Flying Fortress, and a 1990 Hollywood feature film, Memphis Belle. The aircraft was one of the first United States Army Air Forces B-17 heavy bombers to complete 25 combat missions. The aircraft and crew then returned to the United States to sell war bonds. In 2005, restoration began on the aircraft at the National Museum of the United States Air Force at Wright-Patterson AFB in Dayton, Ohio where, from May 2018, it is on display.

The 91st Bomb Group (Heavy) was an air combat unit of the United States Army Air Forces during the Second World War. Classified as a heavy bombardment group, the 91st operated B-17 Flying Fortress aircraft and was known unofficially as "The Ragged Irregulars" or as "Wray's Ragged Irregulars", after the commander who took the group to England. During its service in World War II the unit consisted of the 322nd, 323rd, 324th, and 401st Bomb Squadrons. The 91st Bomb Group is most noted as the unit in which the bomber Memphis Belle flew, and for having suffered the greatest number of losses of any heavy bomb group in World War II. 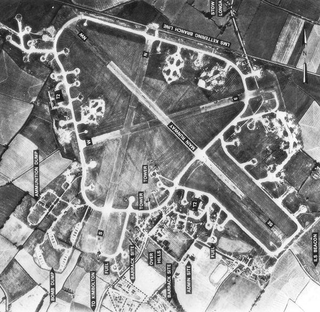 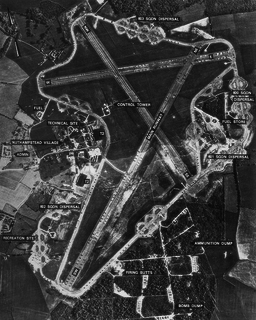 Royal Air Force Station Nuthampstead or more simply RAF Nuthampstead is a former Royal Air Force station in England. The airfield is located mostly in Hertfordshire between the villages of Nuthampstead and Anstey and the hamlet of Morrice Green in Hertfordshire and Langley, Lower Green and Clavering Park Wood in Essex. The eastern part of the airfield including part of the East-West Runway, the Fuel Store, the dispersal areas of 600 and 601 Squadrons and the northeastern perimeter track were all in Essex. RAF Nuthamstead is located four miles to the east of the A10 Hertford to Royston road. 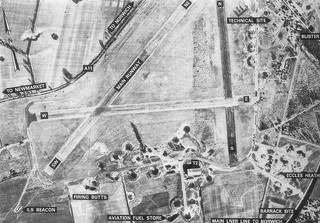 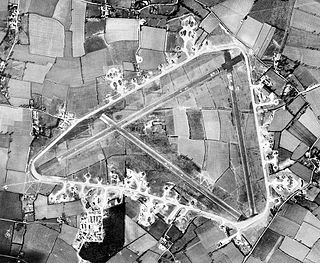 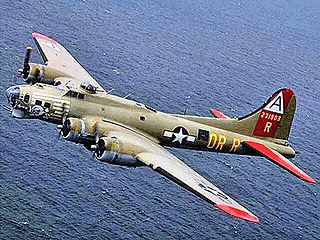 Nine-O-Nine was a Boeing B-17G-30-BO Flying Fortress heavy bomber, of the 323rd Bomb Squadron, 91st Bomb Group, that completed 140 combat missions during World War II, believed to be the Eighth Air Force record for most missions, without loss to the crews that flew her. A different B-17G, painted to mimic the Nine-O-Nine, crashed at Bradley International Airport in Windsor Locks, Connecticut in October 2019.

Shoo Shoo Shoo Baby, originally Shoo Shoo Baby, is a Boeing B-17 Flying Fortress in World War II, preserved and currently in storage at the National Museum of the United States Air Force, awaiting transfer to the Smithsonian's National Air and Space Museum. A B-17G-35-BO, serial number 42-32076, and manufactured by Boeing, it was named by her crew for a song of the same name made popular by The Andrews Sisters, the favorite song of its crew chief T/Sgt. Hank Cordes. Photographs of the bomber indicate that a third "Shoo" was added to the name at some point in May 1944 when the original aircraft commander completed his tour of duty and was replaced by another pilot.

Steve Birdsall of Sydney, Australia, is an aviation writer who has authored many articles and books since the 1960s. He has been published by Air Classics, Flying Review International, Airpower Historian, and the American Aviation Historical Society Journal. His wife is Sandra Birdsall. 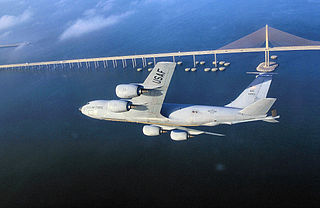 Eugene Patrick Emond was an Officer of the Federal Reserve Bank of New York. During World War II, he was one of the youngest Lieutenants (pilot) of the B-17 Flying Fortress Man O War II, Horsepower Ltd..