Anthony Howard Lockett is a former Australian rules football player. Nicknamed "Plugger", Lockett is the league record-holder for the most goals kicked in the history of the VFL/AFL, with 1,360 goals in a career of 281 games, starting in 1983 with the St Kilda Football Club and ending in 2002 with the Sydney Swans. Lockett won the Brownlow Medal in 1987, becoming the first and only full-forward to ever win the award. He is a four-time Coleman Medallist, kicked more than 100 goals in a season on six occasions and is a member of the Australian Football Hall of Fame. In 1999, Lockett broke the all-time goals record when he kicked his 1300th goal, surpassing Gordon Coventry's record of 1,299, which had stood for 62 years. Lockett's new record remains unbeaten.

Perth Glory Football Club is an Australian professional soccer club based in Perth, Western Australia. It competes in the country's premier competition, the A-League, under licence from Football Australia.

Central Coast Mariners Football Club is an Australian professional soccer club based in Gosford, on the Central Coast of New South Wales. It competes in the A-League, under licence from Football Federation Australia (FFA). The Mariners were founded in 2004 and are one of the eight original A-League teams. It is the first professional sports club from the Gosford region to compete in a national competition. Despite being considered one of the smallest-market clubs in the league, the Central Coast Mariners have claimed one A-League Championship from four Grand Final appearances and topped the table to win the A-League Premiership twice. The club has also appeared in the AFC Champions League five times. 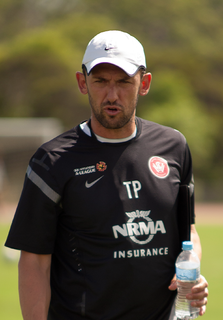 Antony Popovic is an Australian association football manager and former player. He is the current manager of Greek Super League 2 club Xanthi.

APIA Leichhardt Football Club, also known simply as APIA, is a semi-professional soccer club based in the suburb of Leichhardt in Sydney, Australia. The club was formed in 1954 as APIA Leichhardt, by Italian Australians APIA, winner of the national Australian championship of 1987, is currently a member of the NPL NSW. 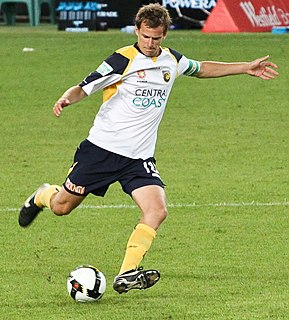 Alexander William Wilkinson is an Australian international football (soccer) player who plays as a central defender and is the captain for Sydney FC in the A-League.

The PFA Footballer of the Year Awards is an annual award ceremony created to formally recognise the most outstanding Australian footballers playing abroad or in the A-League, as well as foreign players playing in the A-League. The inaugural ceremony took place on 11 June 2009 in Sydney. 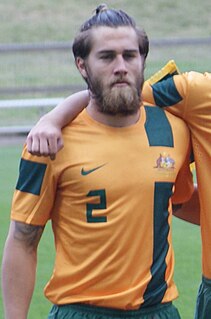 Joshua Brillante is an Australian professional footballer who plays as a defensive midfielder for Greek Super League 2 club Xanthi. Brillante holds dual citizenship due to his Italian heritage. 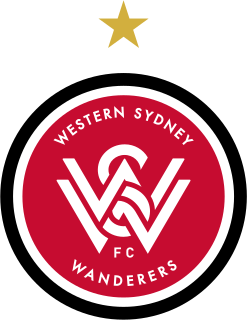 Western Sydney Wanderers Football Club is an Australian professional soccer club based in the Western Sydney region of Sydney, New South Wales. It competes in the country's premier soccer competition, the A-League, under licence from Football Federation Australia (FFA). The club has established itself as a major force in both Australia and Asia, having won one A-League Premiership and an AFC Champions League title in its history.

The Mount Pritchard Mounties Rugby League Football Club is an Australian rugby league football club based in Mount Pritchard, New South Wales formed in 1927. They currently play in the NSW Cup, Ron Massey Cup and Sydney Shield. Mounties are the current feeder club side for The Canterbury-Bankstown Bulldogs.

The following lists events that happened during 2019 in Australia.