Anthony Ronald Stokes (born 7 January 1987) is an English footballer who plays as a forward for Grays Athletic in the Isthmian Division One North. He played in the Football League for Rushden & Diamonds and Brighton & Hove Albion.

Stokes came up through the West Ham United academy along with Mark Noble and Kyel Reid. He made his first team debut and only appearance for West Ham at the age of 18 in September 2005 as a replacement for Tomáš Řepka in the League Cup match against Sheffield Wednesday. [1] [2]

During the 2005–06 season, Stokes was loaned to Conference National side Rushden & Diamonds, [3] where he made 19 appearances. [2] He joined Football League One side Brighton & Hove Albion in a one-month loan deal in August 2006, [4] which was extended for a second month but Stokes decided to return to West Ham after finding first-team opportunities at Brighton difficult. He made seven appearances in all competitions for Brighton. [2] Stokes joined Stevenage Borough on a two-month loan in November 2007. [5] He scored his first career goal in the 3–1 win over Salisbury City in December 2007. [6] He was named reserve team captain when Jack Collison was promoted to the first team for the 2008–09 season. However, he found first team football hard to come by as Collison, Valon Behrami, Scott Parker and Mark Noble were the preferred starters and did not even make the bench on most occasions.

Stokes requested that his two-year contract be terminated early and he returned to the UK in May 2010. [10] In July 2010, Stokes signed for Isthmian League Premier Division side, Concord Rangers. [11] Stokes was a key part of Concord Rangers start in the Isthmian League Premier Division, contributing 20 goals from 41 league appearances in his first season, and was made captain for the 2012–13 season. [12] In 2012, he gained promotion with Concord to the Conference South, scoring the winning goal in extra time in the play-off semi-final against Wealdstone. [13]

In October 2015, Stokes moved from Concord Rangers to local rivals Canvey Island where he had spent a brief loan spell two years earlier. [14]

Matthew James Upson is an English former professional footballer who played as a centre back. Upson played for England at full international level including at the 2010 World Cup.

Christopher Holroyd is an English professional footballer who plays as a striker for Stalybridge Celtic. Holroyd started his football career at Crewe Alexandra, progressing through the club's youth system. He subsequently joined Chester City for the third year of his scholarship, and signed professional terms in 2006. In July 2008, Holroyd left Chester by mutual agreement with a year remaining on his contract.

Lee Martin Boylan is a former footballer and currently is a U23's Manager & coach with Heybridge Swifts. He made over 450 first-team appearances, almost all in the Football Conference. 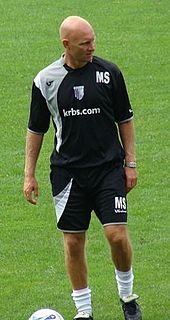 Adam Edward Miller is a retired footballer. He began his career with Ipswich Town but failed to make the first team and played for several non-league teams before joining Queens Park Rangers, where he made his Football League debut in December 2004. He later joined Stevenage Borough, but followed manager Mark Stimson to Gillingham in late 2007. He represented the England National Game XI and played at Wembley Stadium in the final of the FA Trophy.

Jack David Collison is a Welsh football coach and former professional footballer who played as a midfielder.

Alfie James Potter is an English professional footballer who plays for Billericay Town as a midfielder.

Romone Alexander Adolphus Rose is an English footballer who plays as a midfielder or defender for Hungerford Town.

Joseph John Benjamin is an English footballer who last played as a striker for Great Wakering Rovers.

Edward Bahati Obara "Eddie" Odhiambo-Anaclet is a Tanzanian semi-professional footballer who is a player-coach for Banbury United.

Jordan Brown is an English footballer who plays as a left-back for East Thurrock United. A former West Ham United youth player, Brown has played on loan with Aldershot and completed a short-term contract with Crewe Alexandra, as well as playing for Barnet for over two seasons, Boreham Wood, Whitehawk, Dulwich Hamlet, Welling United, Concord Rangers and Canvey Island.

Thomas George Pett is an English professional footballer who plays as a midfielder and is currently a free-agent following his release from Lincoln City in May 2020.