Tony Tarracino (August 10, 1916 – November 1, 2008 [1] ), commonly called Captain Tony, was an American saloonkeeper, boat captain, politician, gambler, and storyteller in Key West, Florida. He was a well-known personality in the city and has been called "arguably the city's most beloved resident" and "the conscience of Key West." [2]

Anthony Tarracino was born in Elizabeth, New Jersey to a bootlegger father. [3] He dropped out of the ninth grade to make and sell whiskey, illegal at the time due to Prohibition. [1] After becoming a gambler, getting involved with the New Jersey Mafia, and being beaten and left for dead at the Newark city dump, he moved to Key West, Florida, in 1948. [3] In 1982, he told the story that he, in Sting fashion, had cheated the mob by using the telephone to get early race results.

There he became a shrimper, a charter boat captain, and a gunrunner. [2] [4] From 1961, Tarracino was the proprietor of Captain Tony's Saloon at 428 Greene Street in Key West, the original location of Sloppy Joe's bar frequented by Ernest Hemingway in the 1930s (the current Sloppy Joe's is located a few doors away at 201 Duval Street). He sold the bar in 1989 but remained a fixture there until shortly before his death. The bar still retains his name. [3]

Tarracino was politically active in Key West politics running for mayor four times [2] before winning office in 1989 by only 32 votes out of more than 6,000 cast. [1] He sought to "limit Key West's growth and to keep its reputation as a refuge for eccentrics and renegades who had found their way to the southernmost point of the continental United States." [1] As mayor, he preserved Key West's daily sunset celebration [1] but he lost a bid for re-election in 1991 to Dennis Wardlow, "prime minister" of the tongue-in-cheek protest secessionist Conch Republic. Tarracino spoke of his two-year term in the office as "the greatest two years of my life." [2]

Tarracino was the author of Life Lessons of a Legend with Brad Manard. At the time of his death, Wendy Tucker, a former Miami Herald reporter was ghostwriting his autobiography, The Breaks. [3]

Tarracino had several wives and was married to his fourth, Marty, for 38 years at the time of his death. [3] He fathered 13 children, including former Survivor: The Australian Outback contestant, Keith Famie. His youngest child, Tony Tarracino Jr., was born when Captain Tony was age 70. [3] He outlived his first three wives, Mimi, Mae, and Shirley, and one of his sons. [1]

Tarracino was portrayed by Stuart Whitman in Cuba Crossing , a 1980 movie about adventurers who get caught up in a plot to kill Fidel Castro. [3] Gulf and western singer-songwriter Jimmy Buffett, who managed one of his unsuccessful mayoral bids, [2] wrote and sang "Last Mango in Paris" about the tales of Tarracino. [4] The song begins with the lines "I went down to Captain Tony's / To get out of the heat / I heard a voice call out to me / 'Son come have a seat'."

Key West is an island in the Straits of Florida, within the U.S. state of Florida. Together with all or parts of the separate islands of Dredgers Key, Fleming Key, Sunset Key, and the northern part of Stock Island, it constitutes the City of Key West.

The Conch Republic is a micronation declared as a tongue-in-cheek secession of the city of Key West, Florida, from the United States on April 23, 1982. It has been maintained as a tourism booster for the city. Since then, the term "Conch Republic" has been expanded to refer to "all of the Florida Keys, or, that geographic apportionment of land that falls within the legally defined boundaries of Monroe County, Florida, northward to 'Skeeter's Last Chance Saloon' in Florida City, Dade County, Florida, with Key West as the nation's capital and all territories north of Key West being referred to as 'The Northern Territories'".

John Henry "Doc" Holliday was an American gambler, gunfighter, and dentist. A close friend and associate of lawman Wyatt Earp, Holliday is best known for his role in the events leading up to and following the Gunfight at the O.K. Corral. He developed a reputation as having killed more than a dozen men in various altercations, but modern researchers have concluded that, contrary to popular myth-making, Holliday killed only one to three men. Holliday's colorful life and character have been depicted in many books and portrayed by well-known actors in numerous movies and television series.

Phantly Roy Bean Jr. was an American saloon-keeper and Justice of the Peace in Val Verde County, Texas who called himself "The Only Law West of the Pecos". According to legend, he held court in his saloon along the Rio Grande on a desolate stretch of the Chihuahuan Desert of southwest Texas. After his death, Western films and books cast him as a hanging judge, although he is known to have sentenced only two men to hang, one of whom escaped. 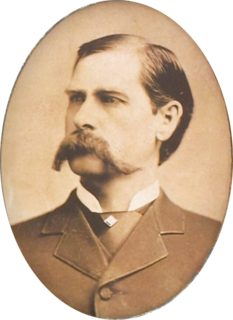 Wyatt Berry Stapp Earp was an American law enforcement officer and businessman who served as a deputy marshal in Tombstone, Arizona Territory. He worked in a wide variety of trades throughout his life and took part in the famous gunfight at the O.K. Corral, during which lawmen killed three outlaw Cochise County Cowboys. He is often erroneously regarded as the central figure in the shootout.

James Jacob Ritty, saloonkeeper and inventor, opened his first saloon in Dayton, Ohio in 1871, billing himself as a "Dealer in Pure Whiskies, Fine Wines, and Cigars." Some of Ritty's employees would take the customers' money and ppeller went around. He wondered whether something such as this could be made to record the cash transactions made at his saloon.

Callahan's Place is a fictional bar with strongly community-minded and empathetic clientele, part of the fictional universe of American writer Spider Robinson. It appears in the Callahan's Crosstime Saloon stories along with its sequels Time Travelers Strictly Cash and Callahan's Secret; most of the beloved barflies appear in the further sequels The Callahan Touch, Callahan's Legacy, Callahan's Key, and Callahan's Con, and the computer game.

Sloppy Joe's Bar is a historic American bar in Key West, Florida located at the corner of Duval and Greene street since 1937. 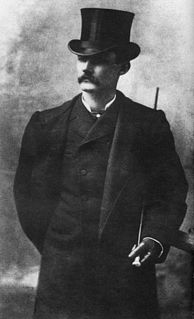 Luke L. Short was an American Old West gunfighter, cowboy, U.S. Army scout, dispatch rider, gambler, boxing promoter and saloon owner. He survived numerous gunfights, the most famous of which were against Charlie Storms in Tombstone, Arizona Territory and against Jim Courtright in Fort Worth, Texas. Short had business interests in three of the best known saloons in the Old West: the Oriental in Tombstone, the Long Branch Saloon in Dodge City, and the White Elephant in Fort Worth.

Jefferson Randolph "Soapy" Smith II was an American con artist and gangster in the American frontier.

The Key West Historic District is a U.S. historic district located in Key West, Florida. It encompasses approximately 4000 acres (16 km²), bounded by White, Angela, Windsor, Passover, Thomas and Whitehead Streets, and the Gulf of Mexico. It contains 187 historic buildings and one structure.

A Western saloon is a kind of bar particular to the Old West. Saloons served customers such as fur trappers, cowboys, soldiers, lumberjacks, businessmen, lawmen, outlaws, miners, and gamblers. A saloon might also be known as a "watering trough, bughouse, shebang, cantina, grogshop, and gin mill". The first saloon was established at Brown's Hole, Wyoming, in 1822, to serve fur trappers.

The Long Branch Saloon was a well-known saloon in Dodge City, Kansas from about 1874 to 1885. It had numerous owners, most notably Chalk Beeson and gunfighter Luke Short. The establishment provided gambling and live entertainment, including Beeson's five-person orchestra. It was the scene of several altercations, shoot-outs, gunfights, and standoffs often associated with cattle towns in the American wild west. Most famous was the 1879 Long Branch Saloon Gunfight, in which Frank Loving killed Levi Richardson.

The Hot Springs gunfight, also known as the Gunfight at Hot Springs, or the Hot Springs Shootout, was a gunfight on March 16, 1899, between two separate law enforcement agencies that occurred in Hot Springs, Arkansas during the Old West period in the United States.

David Wolkowsky was an American developer from Key West, Florida.

Mathias 'Paddy' Bauler was an American saloonkeeper and alderman of the 43rd ward of Chicago from 1933 to 1943 and again from 1947 to 1967. He was known as a corrupt, controversial and charismatic Chicago political boss and is famous for the quote, "Chicago ain't ready for reform yet", or "Chicago ain't ready for a reform mayor" which he exclaimed many times over while dancing a jig in his saloon upon the news of Richard J. Daley's first election as mayor of Chicago in 1955. Mayor Daley banned Bauler from attending public functions for a time shortly after the quote was published. He was the brother of Herman and John Bauler, who had respectively been aldermen from 1909 to 1911 and 1912 to 1920 when the area was part of the 22nd ward.

Wilhelmina Celeste Goehring Harvey was a philanthropist and the first female mayor of Monroe County, Florida. A "grand dame of Keys politics", she was frequently a public face of the Conch Republic. Outside of politics, she was a science teacher and scuba diver.