Anthony Ulysses Thompson, Jr. (September 2, 1975 – June 1, 2007) was an American singer–songwriter. Thompson was best known as the lead vocalist of the American R&B quintet Hi-Five, which had hit singles such as "I Like the Way (The Kissing Game)" and "I Can't Wait Another Minute". After the group disbanded in 1994, Thompson found solo success the following year with his debut album Sexsational in 1995.

Thompson was born in Waco, Texas and raised in Oklahoma City. He was named after his father, Anthony Thompson, Sr.

In 1984, he started singing solos in the local church choir at the age of eight. He then started singing in local talent shows. Local talent and up-and-coming artist William Walton reached out to Thompson in hopes of making his music dreams a reality. He was noticed by the first Waco, Texas R&B group(Ador)signed by Jive Records. Founding members are Toriano Easley (who is the only other native of Oklahoma City, Oklahoma) and left the group shortly before the scheduled release of self-title Hi-Five debut album; along with Marcus Sanders, Russell Neal, and Roderick "Pooh" Clark who were also from Waco. Due to untimely departure of Easley, with expediency Bronx native Treston Irby was brought in late 1990 to complete a five-member lineup. Taking the name Hi-Five, the group signed with Jive Records in 1989. The quintet's self-titled Hi-Five debut album, released September 1990, went platinum and produced several hits, including "I Like the Way (The Kissing Game)", "I Can't Wait Another Minute", and "Just Another Girlfriend". [1] In 1992, the group released their second album, Keep It Goin' On , with "She's Playing Hard to Get" and "Quality Time". Their third album, Faithful , was released in 1993. The Hi-Five, Greatest Hits album was released October 1994, by Jive/RCA Records; as the lead vocalist of Hi-Five for 5-years, also in 1994 the group disbanded and Thompson focused on a solo career.

Thompson's only solo album, Sexsational , was released on Giant Records in 1995. After a three-year (1997-2000)stint on Bad Boy Records, Thompson formed his own record label, N'Depth, and re-incarnated Hi-Five with four new members. The group's next album, The Return was released in 2005. [2] There was also a limited-run edition of a Christmas 2004 album titled "Five Days to Christmas."

In a November 4, 2005 promotional radio appearance with then-DJ Wendy Williams Thompson and re-formed bandmates were confronted with a cease and desist letter, which Williams read aloud. Sent on behalf of two former Hi-Five bandmates, the letter cited their legal ownership of the Hi-Five name. This stopped distribution of album/CD and sales. Shortly afterward on November 22, 2005, a lawsuit was filed in the United States District Court for the Southern District of New York as a third former bandmate joined the initial complaint. The action would prohibit Thompson, an original founding member from using the trademark "Hi-Five" name, that expired 1997 and not renewed; alleging agreement while minors, in connection with recordings not featuring all five original band members. Anthony Thompson was named as lead defendant, along with a former and three new bandmates, several distributors, retail outlet stores including Amazon and Wal-mart and RN'D, his primary distributor. Ultimately the legal case was not dismissed until August 2009, over two years after Thompson's death.

On June 1, 2007, Thompson's body was discovered by security officers at around 10 p.m. near an air-conditioning unit outside of an apartment complex in his native Waco, Texas. [2] An autopsy later determined that he had died from "toxic effects of chlorodifluoromethane," or inhaling a toxic amount of freon. [3] On June 10, 2010 a special ceremony was held for Tony Thompson's grave site headstone installation. Thompson is buried at Doris Miller Memorial Park in Waco, Texas. [4]

Joshua Scott "JC" Chasez is an American singer, songwriter, dancer, record producer, and occasional actor. He started out his career as a cast member on The Mickey Mouse Club before rising to stardom with *NSYNC, and by writing and producing for music acts such as Girls Aloud, Basement Jaxx, David Archuleta, and Matthew Morrison. He also served as a judge for America's Best Dance Crew.

Anthony Terrence Thompson was an American session drummer best known as the drummer of the Power Station and a member of Chic.

Texas are a Scottish pop rock band from Glasgow, Scotland. They were founded in 1986 by Johnny McElhone and Sharleen Spiteri on lead vocals. Texas made their performing debut in March 1988 at the University of Dundee. They took their name from the 1984 Wim Wenders movie Paris, Texas.

Omar Alfredo Rodríguez-López is a Puerto Rican guitarist, songwriter, producer and filmmaker. He is known for being the guitarist, song writer and band-leader of the Mars Volta from 2001 until their breakup in 2012, and is the guitarist for the alternative rock groups At the Drive-In, Antemasque and Bosnian Rainbows. He was also the bassist for the dub band De Facto. He has embarked on a solo career, both in studio and in concert, frequently described as experimental, avant-garde and/or progressive. He has collaborated with numerous artists spanning from John Frusciante to El-P. 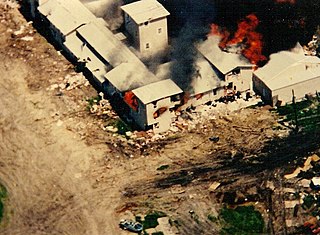 The Waco siege, also known as the Waco massacre, was the law enforcement siege of the compound that belonged to the religious sect Branch Davidians. It was carried out by the U.S. federal government, Texas state law enforcement, and the U.S. military, between February 28 and April 19, 1993. The Branch Davidians were led by David Koresh and were headquartered at Mount Carmel Center ranch in the community of Axtell, Texas, 13 miles northeast of Waco. Suspecting the group of stockpiling illegal weapons, the Bureau of Alcohol, Tobacco, and Firearms (ATF) obtained a search warrant for the compound and arrest warrants for Koresh, as well as a select few of the group's members.

This is a summary of 2003 in music in the United Kingdom.

Hi-Five is an American R&B quintet based in Waco, Texas. Hi-Five had a #1 hit on Billboard's Hot 100 in the early 1990s with "I Like the Way ". The band was formed in Waco, Texas in 1989, and consisted of the founding and original memembers from Waco, Texas: Tony Thompson, Roderick "Pooh" Clark, Marcus Sanders, Russell Neal, and Oaklahoma City, Oklahoma, native, Toriano Easley. 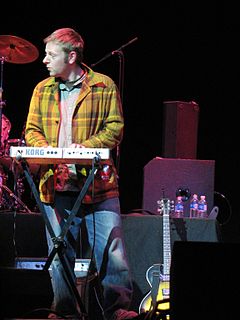 Hugh Christopher Brown is a Canadian singer-songwriter and multi-instrumentalist.

Az Yet is an American R&B group from Philadelphia, best known for their songs "Last Night" and the cover "Hard to Say I'm Sorry" originally performed by Chicago.

Anthony Michael Mortimer is a British singer, rapper, songwriter and composer from London. He is a former member of the boy band East 17, who were originally active from 1991 to 1997 and sold over 20 million records worldwide. Mortimer wrote the band's only number-one single, "Stay Another Day".

High five is a friendly gesture in which one individual slaps another's hand.

"Who Can I Turn To?" is a song written by English lyricists Leslie Bricusse and Anthony Newley and first published in 1964. 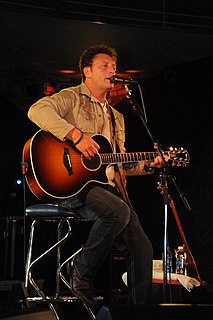 Timothy Ray Rushlow is an American recording artist. Between 1991 and 1997, Rushlow was lead vocalist of country music group Little Texas, which recorded four albums and a Greatest Hits package, in addition to charting more than fifteen singles on the Billboard country singles charts during Rushlow's tenure as lead vocalist.

Hi-Five is the debut 1990 album by the American R&B vocal group "Hi-Five"; original founding members are Waco, Texas and OKC, Oklahoma natives—lead singer Tony Thompson, Russell Neal, Marcus Sanders, Roderick Clark, and co-lead Toriano Easley. Released on September 25, 1990, The album peaked at number thirty eight on the Billboard 200 albums chart. Driven by the hit singles released; first single on August 27, 1990 "I Just Can't Handle It" on the Jive label,, "I Like the Way ", "I Can't Wait Another Minute" and "Just Another Girlfriend". Also, Hi-Five is the only album to feature original founding Hi-Five member 16-year-old Toriano Easley, who turned himself in to Oklahoma City police on September 4, 1990, weeks before release of the studio debut album "Hi-Five" for first-degree murder and sentenced to manslaughter, in March 1991. Also,Easley marked both his only single cover and music video "I Just Can't Handle It" appearance for the debut album with original founding group members; before dismissed from the group. Recorded between ages 13 and 16 years old, Toriano is co-lead singer with Tony Thompson on "The Way You Said Goodbye," "Rag Doll," "I Can't Wait Another Minute," and their demo "I Know Love" which sealed the deal for record label (Jive/RCA) recording contract. The album received an RIAA platinum certification. In the video for "I Can't Wait Another Minute", Treston Irby, at age 18, native of Bronx, New York lip syncs Toriano's co-lead vocals during live performances and in video appearances.

Nuttin' Nyce was an American girl group from Sacramento, CA that formed in 1992. They signed to Pocketown Records and released an album and five singles before splitting up in 1996.

Keep It Goin' On is the second studio album by the American band Hi-Five. Released on August 11, 1992 by Jive Records, The lead single "She's Playing Hard to Get" peaked at number five on the Billboard Hot 100 and number two on the R&B singles chart. It is the second studio album featuring the teen frontman lead singer Tony Thompson who propelled this album into platinum status. It also features the first appearance of Bronx, New York native, Treston Irby. These singles from their previous album, featuring Irby include: "I Can't Wait Another Minute", "I Like the Way ", and the remix version of "Just Another Girlfriend". Also, Keep It Goin' On is the final album to include the original members Roderick "Pooh" Clark and Russell Neal. 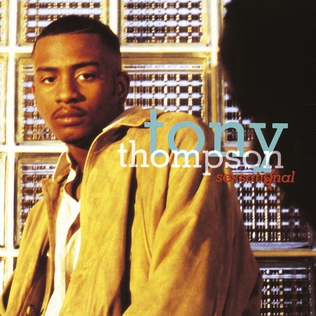 Sexsational is the only solo album by American R&B singer Tony Thompson of the group Hi-Five. It was released June 23, 1995, on Giant Records. The album spawned two singles, one of which was its lead single scored moderate success, the top 20 R&B hit "I Wanna Love Like That" became his highest-charting sole appearance on the US Billboard Hot 100 chart, peaking inside the top sixty, where it reached #59 on that chart.