Torrance was born in Edinburgh in 1891. His older brother, William Breck, was also a noted amateur golfer.

Torrance was joint runner-up in the 1927 German Open at Wannsee Berlin G&CC behind Percy Alliss. [1]

Alfred John "Jack" Westland was an American politician who served as a member of the United States House of Representatives from 1953 to 1965. He represented the Second Congressional District of Washington as a Republican. He was also an accomplished amateur golfer.

Glenna Collett Vare was an American Hall of Fame golfing champion whom the Hall calls the greatest female golfer of her day, and who dominated American women's golf in the 1920s.

Percy Alliss was one of the leading English professional golfers in the 1920s and 1930s, winning many tournaments in Britain and Continental Europe. He was the father of commentator and former golfer Peter Alliss.

Jesse William Sweetser was an amateur golfer, best known as the first American-born player to win the British Amateur.

The Hon. Michael Scott OBE was an English amateur golfer, most famous for being the oldest winner of The Amateur Championship.

Roger Henry Wethered was an English amateur golfer, and the brother of Joyce Wethered, one of the finest female golfers of the pre-war era.

Charles Albert Whitcombe was an English golfer. He was born in Berrow, Burnham-on-Sea, Somerset, the second of the three Whitcombe brothers who were all successful English professional golfers in the 1920s and 1930s and – despite never winning The Open Championship like his younger brother Reg – could be considered the most prominent of the three, winning the British PGA Matchplay Championship twice and captaining the Ryder Cup side four times.

Jesse Poore Guilford was an American amateur golfer. He is most notable for winning the U.S. Amateur in 1921. 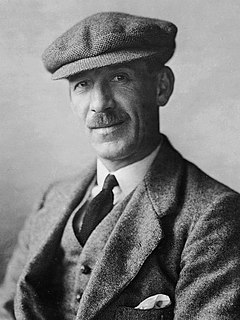 Henry Abraham Mitchell was an English professional golfer. Mitchell had eight top-10 finishes out of 17 appearances in the Open Championship, his best performance being fourth in 1920. He was runner-up in the 1912 Amateur Championship and won the 1924 Miami Open.

Aubrey Basil Boomer was a professional golfer who played in the early 20th century. Boomer had three top-10 finishes in the Open Championship. He was a frequent competitor in the French Open and won the event five times.

William Breck Torrance was a Scottish amateur golfer who played in the early 20th century. Torrance's best performance came in the 1927 Open Championship when he tied for tenth place. His younger brother, Tony, was also a noted amateur golfer.

Sir Ernest William Elsmie Holderness, 2nd Baronet CBE was an English amateur golfer and one of the Holderness baronets. He won The Amateur Championship in 1922 and 1924 and the Golf Illustrated Gold Vase in 1925. He played in the Walker Cup in 1923, 1926, and 1930.

Robert Harris was a Scottish amateur golfer. He won the 1925 the Amateur Championship and was the low amateur in the Open Championship the same year. He was the British Walker Cup captain on three occasions.

John Beaumont Beck MC was an English amateur golfer. He played in the 1928 Walker Cup but is best remembered for being the captain in 1938, when Great Britain and Ireland won the Cup for the first time after nine defeats. He was also the non-playing captain in 1947.

Thomas Peter Dobson was a Scottish professional golfer. He won the Scottish Amateur in 1925. As a professional he represented Scotland on many occasions in the 1930s.

The England–Scotland Amateur Match was an annual men's amateur golf competition between teams representing England and Scotland. It was played from 1902 to 1931, although the match lapsed between 1913 and 1921. The match continued after 1931 but as part of the Men's Home Internationals in which Ireland and Wales also competed. Until 1931 it was played in connection with the Amateur Championship, on the Saturday either before or after the championship.