Antonio "Tony" Velasquez (29 October 1910 – 1997) is a Filipino illustrator regarded as the Father of Tagalog comics and as the pioneer and founding father of the Philippine comics industry. He was the creator of Kenkoy , an “iconic Philippine comic strip character”. [1]

Velasquez was born in Ulilang Kawayan, Paco, Manila. He was the sixth child of a Pangasinense father, Eusebio Velasquez, and a Caviteña mother, Andrea Santos. [1]

Velasquez studied at the Jose Rizal College. In 1934, he also completed a correspondence course on illustration and drawing from the International Correspondence School. [1]

While a student at Jose Rizal College, Velasquez worked as a part-time illustrator for Banaag Press, a publishing company which later became known as Acme Printing in 1927 after being acquired by Ramon Roces, a Filipino-Spanish businessman and publisher. In 1928, Velasquez – together with script writer Romualdo Ramos – created Kenkoy, a “Filipino comic star” character that first appeared in the Tagalog-language Liwayway magazine on 11 January 1929. [1] In 1932, he also created the female equivalent of Kenkoy, Ponyang Halobaybay, a typical portrait of the Filipina woman in American-era Philippines. Other cartoon characters soon followed like Nanong Pandak, Talakitok, Talimusak, and Tinyente Dikyam.

In 1935, Velasquez became chief advertising artist for the Ramon Roces Publications, Inc. As chief advertising artist, Velasquez designed labels for Philippine products such as Tiki-Tiki Vitamins, Castor Oil, and Cortal, among others. Along with such product label designs, Velasquez created cartoon characters that accompanied the advertisements for the products. The characters Velasquez created included Captain Cortal for Cortal, Nars Cafi for Cafi Aspirina, and Isko for Esco Shoes, among others. [1]

During the Japanese Occupation of the Philippines in World War II, Velasquez was forced to use his Kenkoy character as war propaganda to influence the Filipinos. Refusing at first, then Philippine President Jose P. Laurel was able to convince Velasquez to concede and use Kenkoy as a promotional tool for Laurel’s health programs instead of as war propaganda. [1]

Velasquez was the mentor to other Filipino illustrators, namely Francisco Coching (who later became a National Artist for Visual Arts in 2014), Mars Ravelo, Jose Zabala-Santos, and J. M. Perez, among others. [1]

Liwayway is a leading Tagalog weekly magazine published in the Philippines since 1922. It contains Tagalog serialized novels, short stories, poetry, serialized comics, essays, news features, entertainment news and articles, and many others. In fact, it is the oldest Tagalog magazine in the Philippines. Its sister publications are Bannawag, Bisaya Magasin, and Hiligaynon.

Lauro "Larry" Zarate Alcala was a well-known editorial cartoonist and illustrator in the Philippines. In 2018, he was posthumously conferred the National Artist for Visual Arts title and the Grand Collar of the Order of National Artists.

Mga Kuwento ni Lola Basyang is an anthology of short stories written by "Lola Basyang," the nom de plume of Severino Reyes, founder and editor of the Tagalog magazine, Liwayway. The original magazine stories have since been adapted into books, comics, television, and film.

Zuma is a Filipino comic book character created by Jim Fernandez in 1974. The character first appeared in a serial written by Fernandez entitled Aztec. From 1976 to 1985, Zuma got his own series named Anak ni Zuma that was serialized in Aliwan Komiks published by Graphics Arts Service Inc. with illustration by Ben Maniclang. The comics series was the biggest best seller for Aliwan. Following this publication success, spin-offs and a 1990s reboot about the character were published and it was further expanded in other media including film and television.

Jim M. Fernandez is a Filipino comic book artist best known for his works on Aztec and Aliwan Komiks. He also popularized the fictional character, Zuma in his novels. Apart from being an editor, illustrator, cartoonist, and writer for Philippine comics, Fernandez was also a certified public accountant in the Philippines.

Varga is a Filipino comics superheroine, similar to the American Wonder Woman. Mars Ravelo wrote and illustrated Varga for Bulaklak Magazine, appearing first in the magazine's No. 17, Vol. 4 issue. A falling out with some of the magazine's editors caused Ravelo to resign from Bulaklak and transfer to Pilipino Komiks, where he re-launched his superhero. Ravelo renamed her Darna, an anagram of the superheroine's mortal alter-ego name Narda. Darna's adventures in Pilipino Komiks began in the No. 77 issue, where she was illustrated by Nestor Redondo.

Filipino cartoon and animation, also known as Pinoy cartoon and animation, is a body of original cultural and artistic works and styles applied to conventional Filipino storytelling, combined with talent and the appropriate application of classic animation principles, methods, and techniques, which recognizes their relationship with Filipino culture, comics, and films. It also delves into relying on traditional and common Filipino "sense of going about things" or manner of coping with Filipino life and environment.

Pablo S. Gomez, was one of the top komiks writers in the Philippines. He was also a movie scriptwriter and director. His most popular works include Kurdapya and Petrang Kabayo among others.

Francisco V. Coching was a Filipino comic books illustrator and writer and is regarded as one of the “pillars of the Philippine Komiks Industry”. He served as both illustrator and writer for his comic book stories, Coching is referred to as the "King of Komiks", and as the "Dean of Philippine Comics". In 2014, he was posthumously conferred as a National Artist for Visual Arts, the highest honor for artists in the Philippines.

Federico C. Javinal is considered as one of the “great achievers in Philippine Art”, particularly in the field of Philippine comics.

Halakhak Komiks is the first regularly published comics magazine in the Philippines. Its first publication was on November 15, 1946. It was founded by Filipino illustrator Isaac Tolentino and Filipino lawyer Jaime Lucas. 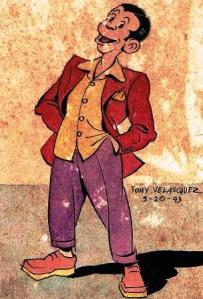 Francisco "Kenkoy" Harabas is a Philippine comics character created by writer Romualdo Ramos and cartoonist and illustrator Tony Velasquez in 1929. Velazquez continued the strip for decades after Ramos' death in 1932. Kenkoy was seminal to Philippine comics and thus Velasquez is considered the founding father of the industry. The term kenkoy has entered the Filipino language to mean a joker, jester, or a hilarious person.

Dominador "Hal" Santiago is a Filipino illustrator and writer in the field of Philippine comics. He is recognized in the comic book profession in the Philippines for his “artistic visualizations of various novels”. Santiago was described by Filipino writer Jim M. Fernandez as the “Raphael of [Philippine comic book] Illustrators”. His illustrations for eight comics series makes him one of the most prolific Filipino comics illustrators, second only to Mar T. Santana, who has illustrated 17 series.