Anthony L. Weeden Jr. (born July 25, 1982) is an American professional basketball player. He is a 184 cm (6 ft 1in) guard. He played competitively at Emmerich Manual High School before transferring to Pike High School where they brought home the 2001 National Championship.

Pike High School is a public high school on the northwest side of Indianapolis, Indiana.

His career began in 2005 where he played in the United States and then Canada. He then transitioned to Syria, and in 2007 signed a contract with Polpharma Starogard Gdansk. Weeden began the 2008 season in Silesia, Wroclaw and after the withdrawal of the club with PLK, Weeden went on to play in Kwidzyn. In 2009, he returned to Polpharma where he led his team to the Polish Championships and took home the Bronze Medal. Weeden was selected for the 2010 Polish All Star Game and in the summer of 2010, Weeden signed to Marousi BC in the tough and physical Greek First Division (Athens, Greece).

Weeden was the Mid-Continent 2003-04 All-Newcomer Team Member. He led his team in steals in that same year, led his team in 3pts made for four straight seasons, and ranked 10th on the All-Time scoring list at Chicago State University (NCAA).

Chicago State University (CSU) is a public university in Chicago, Illinois. It is a member school of the Thurgood Marshall College Fund.

James Ager Worthy is an American former professional basketball player who is currently a commentator, television host, and analyst. Named one of the 50 Greatest Players in NBA History, "Big Game James" was a seven-time NBA All-Star, three-time NBA champion, and the 1988 NBA Finals MVP with the Los Angeles Lakers in the National Basketball Association (NBA).

Rick Apodaca is a Puerto Rican former professional basketball player. Apodaca has played in the NCAA, USBL, NBDL, and the National Superior Basketball League of Puerto Rico (BSN) with the Arecibo Captains, Bayamón Cowboys, San German Athletics and Leones de Ponce. He also played professional basketball in Poland, Italy and Turkey. Apodaca was a member of the senior Puerto Rican National Basketball Team that defeated the United States at the 2004 Summer Olympic Games.

Natalie Golda is a former American water polo player and currently the head coach of the newly formed Fresno State Bulldogs water polo team to begin competition in 2018. Considered one of the greatest women's water polo players of all time, her senior leadership helped guide the 2005 UCLA Bruins to their seventh national championship. In May 2005 Golda received the Peter J. Cutino Award, given to the best player in women's collegiate water polo. She was also a member of the US Water Polo Team that won the bronze medal at the 2004 Athens Olympics and the silver medal at the 2008 Beijing Olympics. She was elected to the USA Water Polo Hall of Fame in 2015.

Kelly Kristen Rulon is an American water polo player. She won a gold medal with the United States at the 2012 Summer Olympics in the water polo competition. She is also a bronze medalist from the 2004 Summer Olympics. Her position is driver.

Roger Powell Jr. is an American former professional basketball player and assistant coach for the Gonzaga Bulldogs men's basketball team. He played collegiately at the University of Illinois from 2001–2005, after having attended Joliet High School, with a 2001 graduation. Powell played the forward position for his high school and in college. He graduated from the University of Illinois with a degree in speech communications. Powell's father was a former Joliet Central High School and Illinois State player.

The Oral Roberts Golden Eagles are the 16 intercollegiate teams representing the Oral Roberts University that compete in the U.S. National Collegiate Athletic Association's Division I. Oral Roberts currently competes in the Summit League as of July 1, 2014. 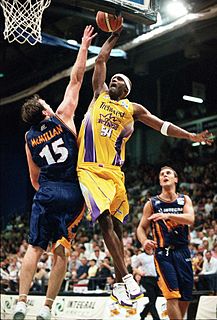 Eumarkjah Tywan "Mark" Sanford, is a retired American professional basketball player. He is currently the player development coach for the Memphis Grizzlies in the NBA.

J. T. Tiller is an American professional basketball player. He played collegiately with the University of Missouri Tigers.

Obadiah Nelson "Obie" Trotter is an American-Hungarian professional basketball player for Rosa Radom of the Polish Basketball League (PLK). He is 6 ft 1 in (1.85 m), and plays the point guard position. He received Hungarian citizenship in June 20, 2011, and played for Hungary in the unsuccessful Eurobasket 2011 qualification campaign, averaging 11 points and four rebounds per match.

Jay L. Threatt is an American professional basketball player for Stal Ostrów Wielkopolski of the PLK. He played for the Delaware State Hornets for three seasons and twice led the NCAA in steals. He was the first ever Division I player to hold at least a share of the steals title in more than one season.

Zakee Wadood is an American professional basketball player. After graduating from East Tennessee State University (ETSU) in 2004, Wadood has played in leagues in Finland, Spain and Luxembourg.

The 2014–15 St. Francis Brooklyn Terriers men's basketball team represented St. Francis College during the 2014–15 NCAA Division I men's basketball season. The Terrier's home games were played at the Generoso Pope Athletic Complex. They also hosted one home game at Madison Square Garden, defeating Central Connecticut in the second game of a double header that saw St. John's defeat Marquette. The team has been a member of the Northeast Conference since 1981. St. Francis Brooklyn was coached by Glenn Braica, who was in his fifth year at the helm of the Terriers and has made the NEC Tournament each year.

Ronald Moore is an American professional basketball player who last played for Élan Béarnais of the French LNB Pro A. Whilst playing collegiately for Siena, he led the NCAA Division I in assists during his senior season (2009–10).

Tyler Quincy Dorsey is a Greek-American professional basketball player for Maccabi Tel Aviv of the Israeli Premier League and the EuroLeague. At a height of 1.96 m (6'5") tall, he plays at the shooting guard position. After graduating from Maranatha High School, in Pasadena, California, he played college basketball for the Oregon Ducks. While at Oregon, he was nicknamed "Mr. March" for his clutch play during the NCAA tournament. He is also a member of the senior Greek national team.

Silas Melson is an American professional basketball player for Polpharma Starogard of the Polish Basketball League (PLK). He played college basketball for Gonzaga University, where he was named All-West Coast Conference Honorable Mention in 2018. Standing at 6 ft 4 in (1.93 m), he plays at the point guard and shooting guard positions.

Taiwo Hassan Badmus is a British/Irish professional basketball player who last played for Marin Peixegalego of the Spanish League. He played college basketball in the United States for Fairmont State University and University of Virginia's College at Wise. He is also a member of the Ireland national basketball team and represented them in the FIBA European Championships in the summer of 2018.