Wilkinson was born on 14 August 1948 and was brought up in Essex, England. [2] From 1966 to 1969, he studied geography at Birkbeck, University of London, [3] graduating with a Bachelor of Science (BSC) degree. [4] He then undertook post-graduate study at McMaster University, Ontario, Canada, graduating from there with a Master of Science (MSc) degree in 1972. [2] [5] He never undertook a doctorate. [4]

Wilkinson worked as a consultant landscape archaeologist from 1972 to 1989. [4] Between 1989 and 1992, he was the Assistant Director of the British School of Archaeology in Iraq. [2] From 1995 to 2003, he worked at the University of Chicago, first as a research associate and then as an associate professor. [1] During the 1990s, he founded the 'Center for Ancient Middle Eastern Landscapes' of the Oriental Institute, University of Chicago. [2]

In 2003, he returned to the United Kingdom to become a lecturer at the University of Edinburgh. [2] He was promoted to Professor of Near Eastern Archaeology in 2005. [1] In 2006, he left Edinburgh to become Professor of Archaeology at Durham University. [2] In addition to his research and teaching within the Department of Archaeology, he was involved with Durham's Institute of Advanced Study. [6]

Wilkinson had undertaken archaeological surveys in northern Syria, Iran and northern Iraq. [6] He worked with declassified CORONA satellite images to research ancient sites and landscapes of Upper Mesopotamia. [2] He was director of the Land of Carchemish project investigating the surrounding landscape of Carchemish, a Bronze Age capital city. [7]

In 1995, Wilkinson married Eleanor Rose Barbanes. [4] She is also an archaeologist, and collaborated with her husband on a number of projects and publications. [8]

Wilkinson received two awards for his monograph titled Archaeological Landscapes of the Near East: the Society for American Archaeology Book Award in 2004 and the James R. Wiseman Book Award by the Archaeological Institute of America in 2005. [9] [10] In 2008, he was elected Fellow of the British Academy (FBA), the UK's national academy for the humanities and the social sciences. [1] In 2009, he was awarded the John Coles Medal for Landscape Archaeology by the British Academy. The medal is awarded biennially 'for distinguished achievements in landscape archaeology'. [11]

A memorial volume, New Agendas in Remote Sensing and Landscape Archaeology in the Near East: Studies in Honour of Tony J. Wilkinson was published in 2020, [12] edited and containing chapters by many of Wilkinson's former students. [13]

The Oriental Institute (OI), established in 1919, is the University of Chicago's interdisciplinary research center for ancient Near Eastern ("Orient") studies and archaeology museum. It was founded for the university by professor James Henry Breasted with funds donated by John D. Rockefeller, Jr. It conducts research on ancient civilizations throughout the Near East, including at its facility, Chicago House, in Luxor, Egypt. The Institute publicly exhibits an extensive collection of artifacts related to ancient civilizations at its on-campus building in Hyde Park, Chicago. According to anthropologist William Parkinson, the OI's highly focused "near Eastern, or southwest Asian and Egyptian" collection is one of the finest in the world. 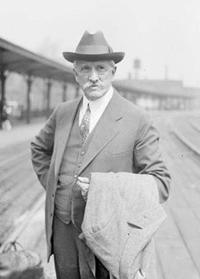 James Henry Breasted was an American archaeologist, Egyptologist, and historian. After completing his PhD at the University of Berlin in 1894, he joined the faculty of the University of Chicago. In 1901 he became director of the Haskell Oriental Museum at the university, where he continued to concentrate on Egypt. In 1905 Breasted was promoted to full professor, and held the first chair in Egyptology and Oriental History in the United States.

Hamoukar is a large archaeological site located in the Jazira region of northeastern Syria, near the Iraqi and Turkish borders. The early settlement dates back to the 5th millennium BCE, and it existed simultaneously with the Ubaid and the early Uruk cultures. It was a big centre of obsidian production. In the 3rd millennium, this was one of the largest cities of Northern Mesopotamia, and extended to 105 ha.

Henri "Hans" Frankfort was a Dutch Egyptologist, archaeologist and orientalist.

Michael Gordon Fulford, CBE, FBA, is Professor of Archaeology at the University of Reading, He studied Archaeology and Latin at Southampton University, where he was also awarded a doctorate. Between 1971 and 1974, he was employed as the personal research assistant of Professor Sir Barry Cunliffe and was afterwards appointed lecturer and later also reader at the University of Reading. He received a personal professorship in 1988 and became professor of the Chair of Archaeology at the university when it was established in 1993. He has also been Dean of the Faculty of Letters and Social Sciences and Pro-Vice-Chancellor (1998–2004).

Robert John Braidwood was an American archaeologist and anthropologist, one of the founders of scientific archaeology, and a leader in the field of Near Eastern Prehistory.

Christopher John Scarre, FSA is an academic and writer in the fields of archaeology, pre-history and ancient history. He is Professor of Archaeology at the University of Durham and was head of its archaeology department 2010-2013.

Tell es-Sweyhat is the name of a large archaeological site on the Euphrates River in northern Syria. It is located in Raqqa Governorate roughly 95 km northeast of Aleppo and 60 km south of Carchemish. Also, an Uruk site of Jebel Aruda is located just across the river.

Edward Chiera was an Italian-American archaeologist, Assyriologist, and scholar of religions and linguistics.

Winifred Lamb was a British archaeologist, art historian, and museum curator who specialised in Greek, Roman, and Anatolian cultures and artefacts. The bulk of her career was spent as the honorary keeper (curator) of Greek antiquities at the University of Cambridge's Fitzwilliam Museum from 1920 to 1958, and the Fitzwilliam Museum states that she was a "generous benefactor ... raising the profile of the collections through groundbreaking research, acquisitions and publications."

The Land of Carchemish Project was a large archaeological research project at Durham University focusing on the archaeological site of Carchemish in northern Syria. It started in 2006 and was directed by Tony Wilkinson and Edgar Peltenburg. It built upon the Jerablus Tahtani Project directed by Professor Peltenburg and is part of the Fragile Crescent Project at Durham University, which aims to advance understanding of the settlement landscapes of Upper Mesopotamia and the northern Levant. Investigations were undertaken in conjunction with the DGAM in Damascus until 2010, after which date it was stopped by the Syrian Civil War.

David John Breeze, OBE, FSA, FRSE, HonFSAScot, Hon MIFA is a British archaeologist, teacher and scholar of Hadrian's Wall, the Antonine Wall and the Roman army. He studied under Eric Birley and is a member of the so-called "Durham School" of archaeology. He was a close friend and colleague of the late Dr Brian Dobson.

Edward Ernest David Michael Oates,, known as David Oates, was a British archaeologist and academic specialising in the Ancient Near East. He was director of the excavations at Nimrud from 1958 to 1962, Tell al-Rimah from 1964 to 1971 and at Tell Brak from 1976 to 2004. He was Professor of Western Asiatic Archaeology at the Institute of Archaeology from 1969 to 1982 and Fellow of the McDonald Institute for Archaeological Research from 1997 to 2004.

Joan Louise Oates, FBA is an American archaeologist and academic, specialising in the Ancient Near East. From 1971 to 1995, she was a fellow and tutor of Girton College, Cambridge and a lecturer at the University of Cambridge. Since 1995, she has been a Senior Research Fellow of the McDonald Institute for Archaeological Research. Since 2004, she has been director of the excavations of Tell Brak; she was Co-Director, with her husband David Oates, between 1988 and 2004.

David Leslie Kennedy is an archaeologist and historian of the Roman Near East, with a focus on Aerial Archaeology, Roman landscape studies and the Roman military. He is Emeritus Professor and Senior Honorary Research Fellow in Roman Archaeology and History at the University of Western Australia.

Robin W. Dennell is a British prehistoric archaeologist specialising in early hominin expansions out of Africa and the Palaeolithic of Pakistan and China. He is Professor Emeritus of Human Origins of the University of Sheffield, and an honorary professor at the University of Exeter.

Susan Sherratt is Reader in Mediterranean Archaeology at the University of Sheffield. Her research focuses on the archaeology of the Bronze and Early Iron Ages of the Aegean, Cyprus and the eastern Mediterranean, especially trade and interaction within and beyond these regions.