Tony Woodcock may refer to:

Rugby league, often called simply as rugby or league, is a full-contact sport played by two teams of thirteen players on a rectangular field measuring 68 metres wide and 112–122 metres long. One of the two codes of rugby football, it originated in Northern England in 1895 as a split from the Rugby Football Union over the issue of payments to the players. Its rules progressively changed with the aim of producing a faster, more entertaining game for spectators.

Tony Miller may refer to:

Iosefo Motu Tony is a former New Zealand international rugby league footballer who played as a fullback in the 2000s and 2010s. He previously played in the NRL for the New Zealand Warriors and the Brisbane Broncos before playing in the Super League for the Castleford Tigers, Hull F.C. and the Wakefield Trinity Wildcats, and in the RFL Championship for Whitehaven.

The following lists events that happened during 1991 in New Zealand. 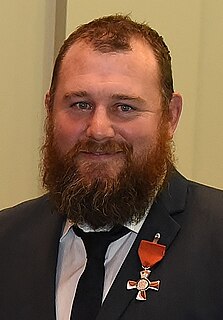 Kaipara College is a secondary school in Helensville, New Zealand. The current principal is, as of Term 3 2020, Steve McCracken.

Tony or Anthony Ward may refer to:

Mike Brown is an English professional rugby union player who plays fullback or wing for Harlequins and the England rugby team. Brown joined the Harlequins senior team in 2005, having had previous youth career spells at Salisbury and Melksham, and began playing for the England first team two years later. 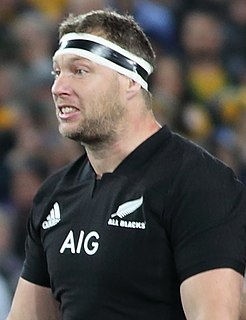 Wyatt William Vogels Crockett is a former New Zealand rugby union player. He played at prop for the Crusaders in Super Rugby, Canterbury and Tasman in the National Provincial Championship, and the New Zealand national team, the All Blacks. Crockett has played in 202 Super Rugby fixtures and is the most-capped Super Rugby player of all time.

Charles Faumuina is a rugby union player who plays prop, for Toulouse in Top 14 in France and formerly for New Zealand internationally. He was a key member of the 2015 Rugby World Cup winning team.

Tony Collins is a British social historian specialising in the history of sport.

Woodcock is a relatively uncommon English surname that seems to have originated from varied roots in the Early Middle Ages.